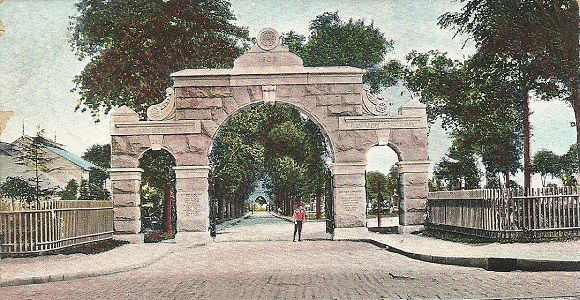 Early 20th century postcard showing the entrance to the Bayview - New York Bay Cemetery on the east side of Ocean Avenue at Chapel Avenue. 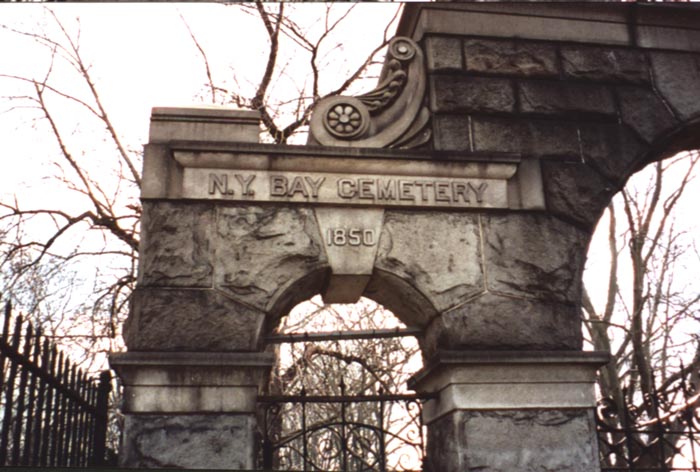 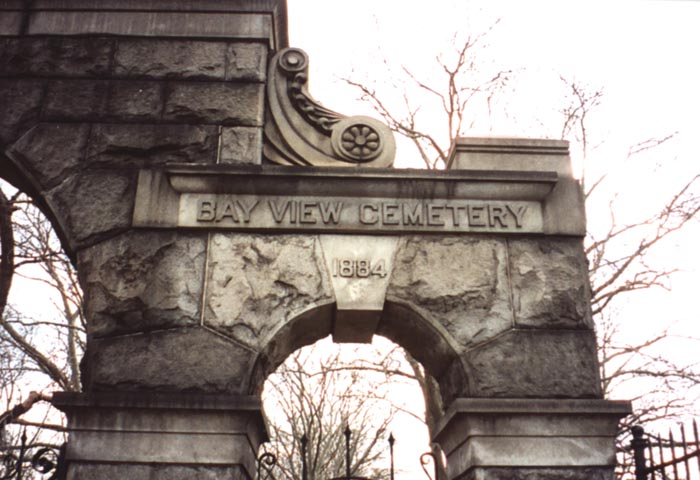 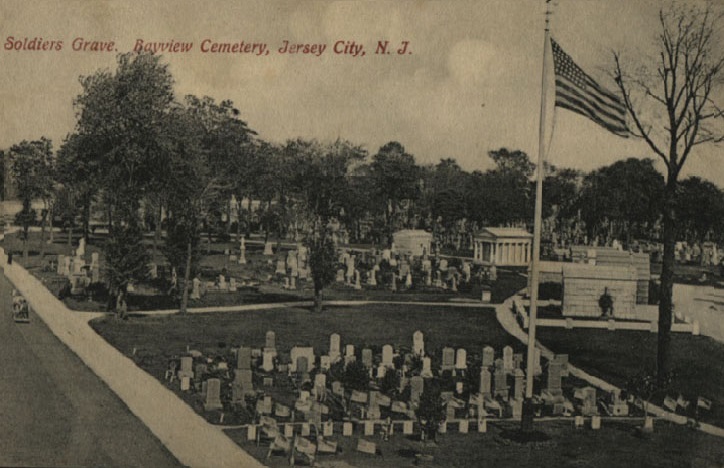 Early 20th century postcard showing an area of the Bayview Cemetery near Garfield and Cator Avenues. 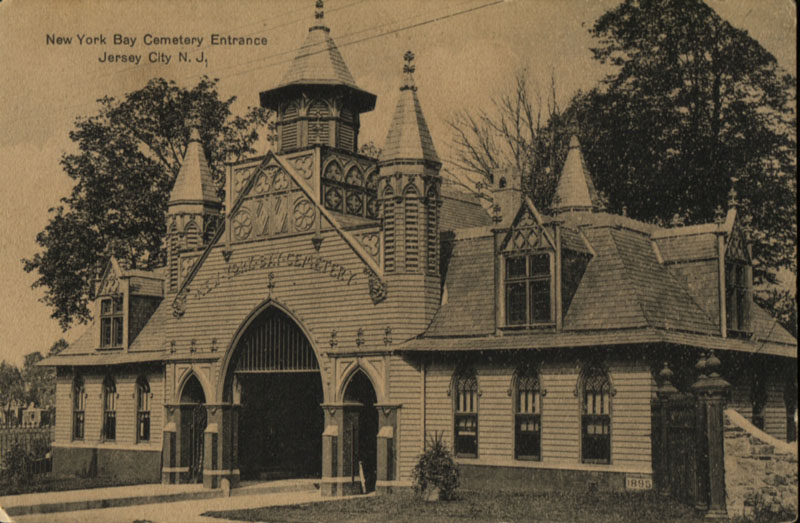 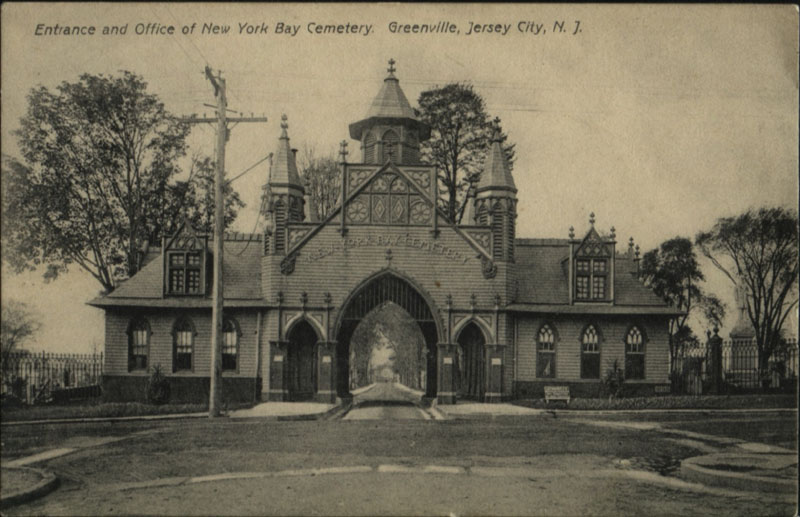 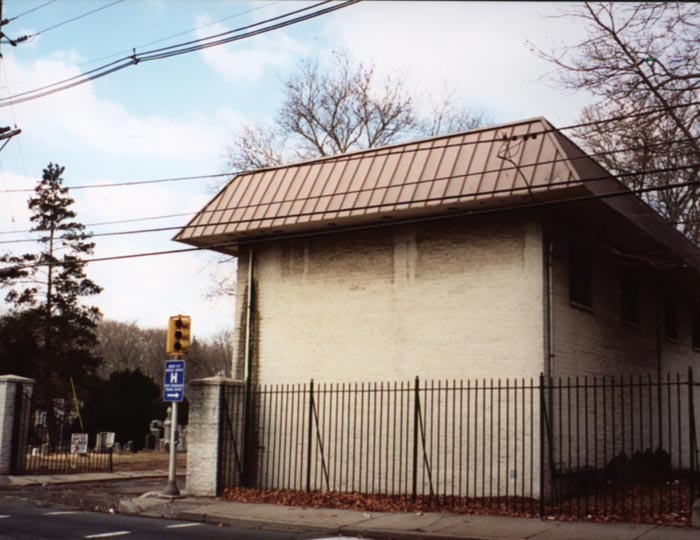 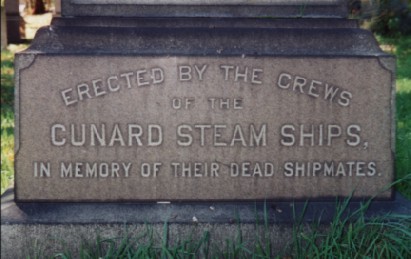 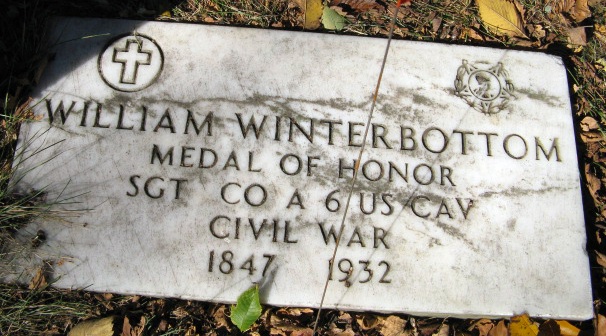 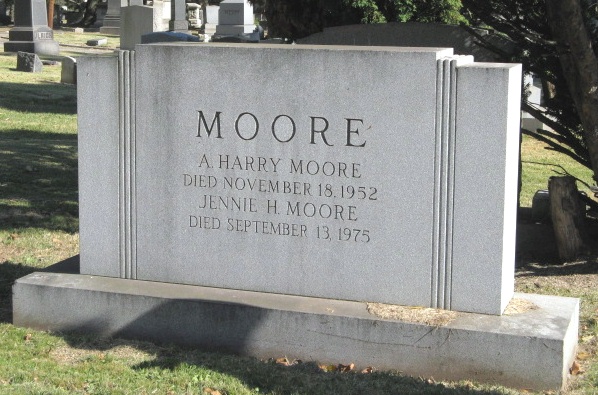 Gravestone of A. Harry Moore and his wife, Jennie 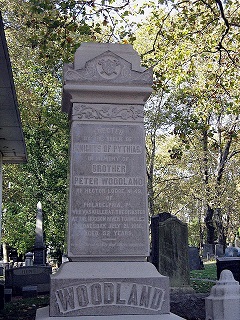 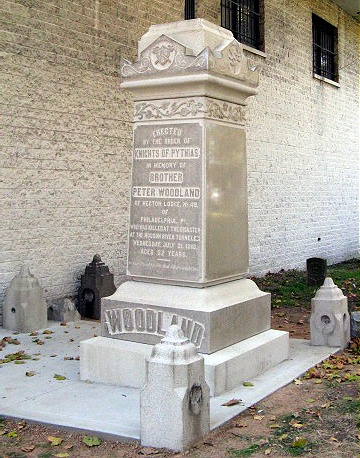 Bayview-New York Bay Cemetery is in the southeastern Greenville section of Jersey City; It fills an expansive area between Garfield and Ocean Avenues and extends to the sloped terrain from Garfield Avenue to the bottom of the hill that oversees New York City. One enters the cemetery either on Ocean Avenue or at the intersection of Garfield and Chapel Avenues.

The name of the cemetery is derived from the merger of the "Bay View" and "New York Bay" cemeteries. The New York Bay Cemetery, begun ca. 1848-1850, was designed as a garden-style burial ground.  It incorporates the features of the Rural Cemetery Movement of the 1830s to remove burials from churchyards and to place cemeteries in areas away from potential urban development. Landscaping and the use of a grid-layout system were also part of this burial reform effort.

Cunard, the British steamship company, purchased an enclosed plot of several lots. It was reserved for its employees who lived in the Jersey City community. Formerly the Cunard White Star Line, Cunard operated its passenger line from the Jersey City waterfront. During those years, approximately one hundred Cunard workers were buried in the American cemetery. An inscription on the granite monument at the center of the plot reads: "Erected by the crews of the Cunard steamships in memory of their dear shipmates." The earliest listing of the deceased marks the death of Hugh McPherson in 1857. There is also a marker for the deceased of the HMS Hibernia. In December 1847, it became the first Cunard ship docked at the Jersey City piers begun by the Associates of the Jersey Company.

The Bayview-New York Bay Cemetery entrance on Ocean Avenue features an elaborate Romanesque Revival-style granite arch that dates back to 1902. It is composed of three rounded arches. On either side of the large central arch is a smaller pedestrian arch, each revealing the founding date for the two cemeteries. A wrought-iron gate across the center arch now closes the entrance to vehicular traffic.

The opening of the New York Bay Cemetery in Jersey City was partly in response to the burial needs of the immigrants living in Manhattan across New York Bay. Among the earliest burials were residents of the Jewish faith. Fraternal organizations from New York--the Sol Benjamin Society and a lodge of the United Order of the Sons of David--supervised the care of some of the graves. The dates on most of the forty to fifty graves are of those who died in the 1870s and 1880s. Inscriptions on some of the stones indicate the places of birth of the deceased as Germany and Alsace (French). The oldest readable grave marker is for Moses Hirsch who died in 1857.

Jersey City's first Jewish congregation was formed in the 1860s. Over the years, it became the present-day Temple Beth-El to whom the cemetery was available.