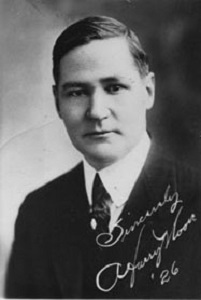 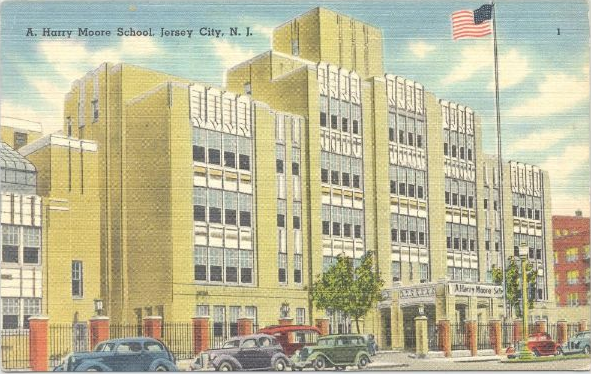 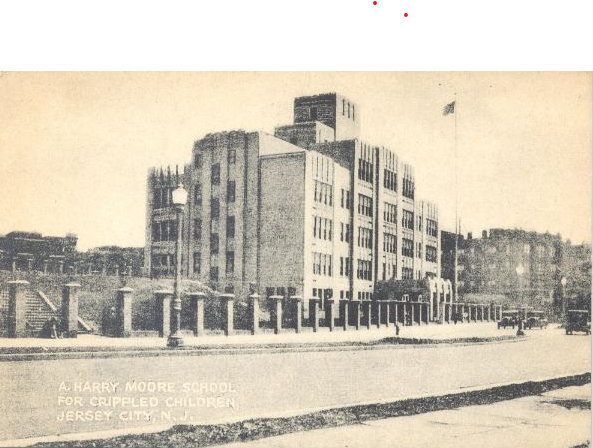 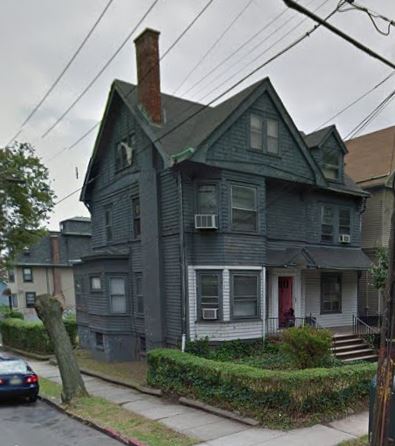 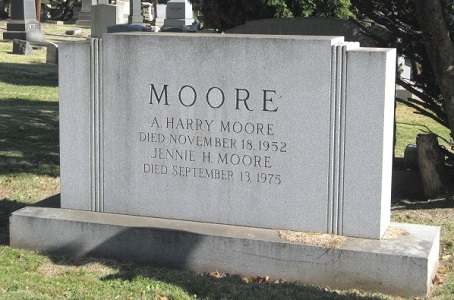 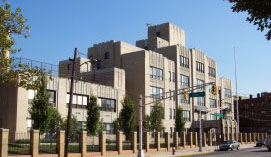 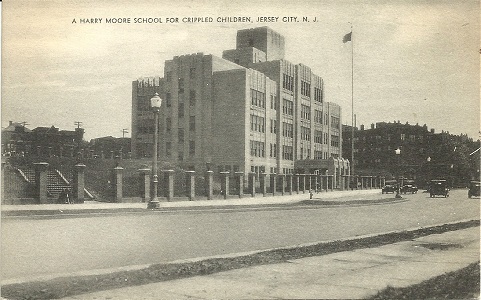 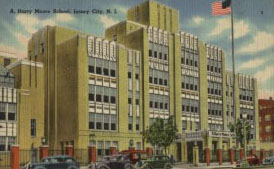 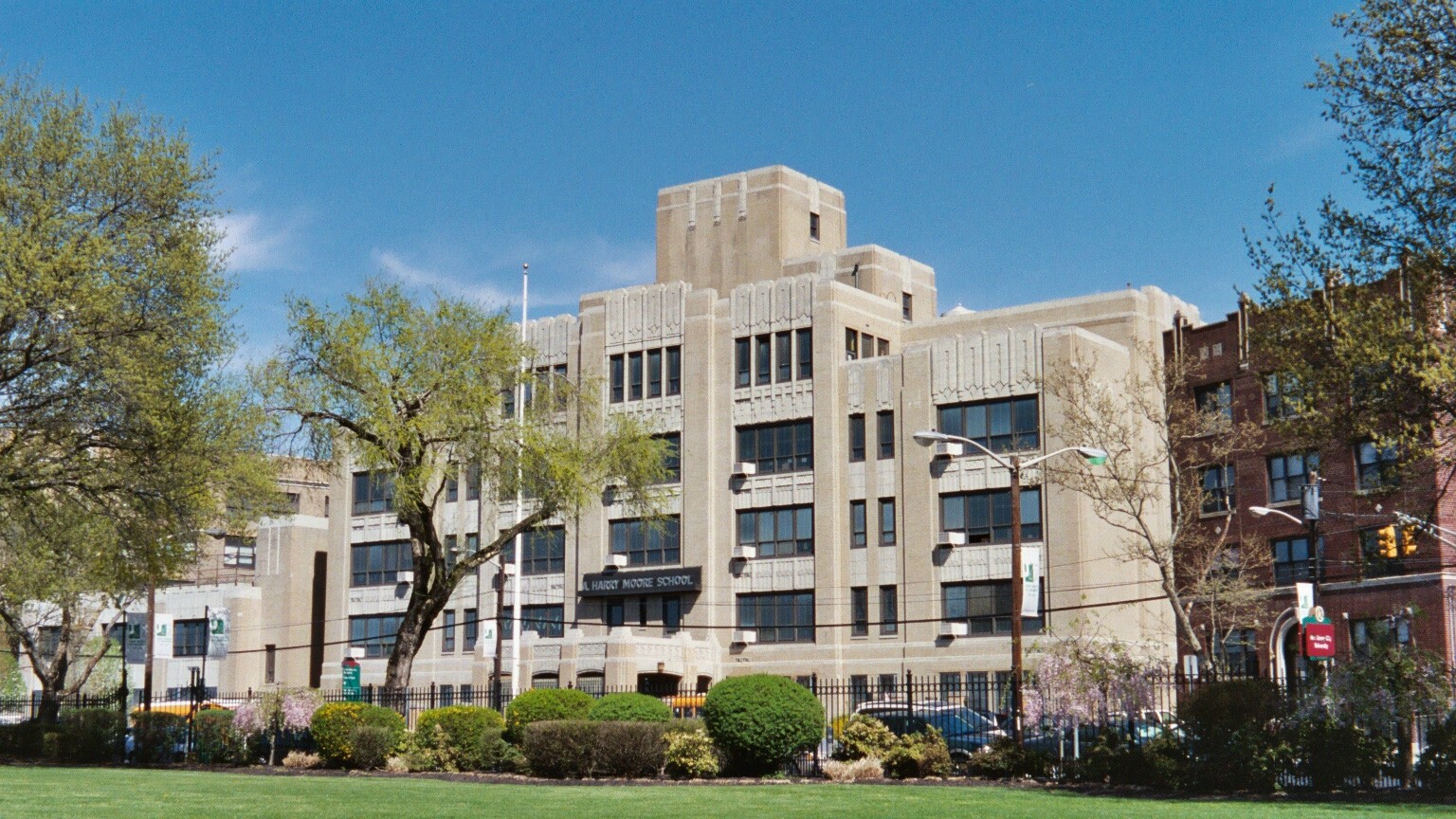 The only three-term governor of New Jersey, Arthur Henry (Harry) Moore was born on July 1, 1877, the date that appears on his New Jersey birth record (see note). He began his political career in Jersey City and was elected to three non-consecutive terms in 1925, 1931, and 1937 under the 1844 state constitution. With the support of his mentor Jersey City Mayor Frank Hague, Moore succeeded to the state's highest office and a US Senate seat as a Democrat in a mostly Republican state. Moore's attributes as a politician are described in a New York Times article: "Mr. Moore's success as the greatest vote-getter in the history of New Jersey was owing partly to his personality. He was an affable, friendly politician of the old handshaking, baby-kissing school. But most important in his rise was the backing of Mr. Hague" (19 November 1952).

Moore, one of six children of Robert White and Martha McComb Moore, was born in the working-class Lafayette section of Jersey City. They lived at 240 Whiton Street and were members of the Lafayette Reformed Church at the northwest corner of Communipaw Avenue and Pine Street. He attended Public School No. 13 at Pine Street (no longer extant) but left school at age thirteen to help support his family and widowed mother. He continued his education by taking secretarial courses at Cooper Union in New York City. It not only prepared him for employment but also his first political job as the secretary to Jersey City Mayor H. Otto Wittpenn (1908 to 1911). Moore and Wittpenn were boyhood friends from the Lafayette neighborhood where Wittpenn's father ran a grocery store at 320 Communipaw Avenue.

In 1911, Moore married Jennie Hastings Stevens. Her father James Stevens ran a butcher shop at 225 Whiton Street, a short distance from the Stevens home at 209 Whiton and near Moore's home. Mrs. Moore, also a member of the Lafayette Reformed Church, took up secretarial studies.

That same year, Mayor Wittpenn appointed Moore as City Collector, filling the vacancy left by the death of Robert "Bob" Davis, the Democratic party boss of Hudson County. After being a tax collector from 1911 to 1913, Moore won his first elective office as parks commissioner on the first City Commission of Jersey City in 1913 and was elected four times to the City Commission. Moore ran on a slate of candidates put up by Wittpenn against that of former mayor Mark Fagan, who led in the polls and was returned to the mayoralty. Moore alone on the Wittpenn slate had the votes to join the Fagan administration as a commissioner. Another young political hopeful on Fagan's ticket was Frank Hague, who became Director of Public Safety. Hague dominated the commission and helped advance Moore's political career.

As the city's Director of Parks and Public Property, Moore became an advocate for children with physical disabilities. His continued commitment to this cause resulted in the 1931 construction of the school in Jersey City that bears his name. He also held an annual "Crippled Kiddies' Day" at Sea Girt, the summer capital of New Jersey. His support for children's recreational programs earned him the title of "the kiddies' friend."

In the 1917 municipal election, Moore ran with Hague. It marked Hague's ascent to power as mayor and his political influence on the state level. Hague's goal was for Moore to become New Jersey's governor--an essential post in Hague's ambitious plans. In preparation, Moore attended the New Jersey Law School in Newark, passed the state bar examination in 1922, and earned his degree two years later at age 45.

In his first gubernatorial campaign in 1925, Moore ran as an anti-prohibition "wringing wet" candidate against his "dry" opponent, Republican State Senator Arthur Whitney of Morris County. Moore pledged that if elected he would start a movement for Congress to alter the enabling Volstead Act, thereby gaining the support of "wet" Republicans. With the backing of Democratic Hudson County, Moore defeated Whitney by a plurality of 40,000 votes. Whitney credited "Hagueism" for Moore's victory.

During his first term, Governor Moore oversaw the revision of state's "Blue Laws," voted to end state court injunctions against strikes and picketing, and supported the increase of workmen's compensation to twenty dollars a week. He worked with New York Governor Al Smith on the opening of the Holland Tunnel. The tunnel construction began in New York and extended under the Hudson River to the "Horseshoe" section of Jersey City. When inspecting the tunnel with Smith in 1926, Moore called the Holland Tunnel "one of the outstanding achievements of engineering history and great significance to the States of New Jersey and New York" ("Smith and Moore Meet in Tunnel." New York Times 22 August 1926).

Against the backdrop of the Depression, Moore ran for governor a second time in 1931 against the Republican candidate David Baird, Jr. He was easily elected with a plurality of 230,000 votes. Governor Moore worked to reduce the state budget and provide additional funding to the state's municipalities. His second term was also marked by his attention to the case of the Lindbergh baby (1932), the formation of the State Planning Board, and control over narcotics by the State Department of Health. On August 28, 1932, Moore and Hague staged a rally for the Democratic presidential candidate Franklin Delano Roosevelt at Sea Girt, NJ. With a record attendance of over 100,000 people, it surpassed their rally with 80,000 attendees at Sea Girt four years earlier (August 25, 1928) for the Democratic presidential candidate Al Smith.

As he was ending his second term, Moore was persuaded by Hague to run for the US Senate in 1934; Moore overran his opponent with a 234,000 vote plurality. Then in a highly irregular move in American politics, Moore, who became disillusioned with New Deal politics, resigned his Senate seat after two years to return to state politics. Historian Richard J. Connors writes that Moore was "philosophically a Jeffersonian Democrat," who came to question the New Deal program of Franklin D. Roosevelt.  He was the "only Senate Democrat to vote against the Social Security Act of 1935" (Connors, Encyclopedia of New Jersey 534). During his Senate tenure, Moore did obtain federal funding for major WPA projects essential to improving the economy in Hague-controlled Hudson County--the Jersey City Medical Center, Roosevelt Stadium, and National Guard Armory.

Hague recruited Moore once more to return to Trenton by entering the 1937 gubernatorial election. Moore was handily elected for a third term against Republican candidate Lester H. Clee with a plurality of 45,000 votes, mostly due to Hudson County voter support. He led the state in approval of its control of gasoline and liquor pricing and the restoration of the parimutuel system of horse race betting. Moore appointed Hague's nephew Frank Hague Eggers to the New Jersey Court of Errors and Appeals (now the Supreme Court) after having advanced him as a judge to the First District Court in Hudson County in 1934. Before leaving what would be his last term, Moore made preparations for the impending Second World War in founding the New Jersey Defense Council and calling up New Jersey's National Guard for federal service. When Hague urged Moore to run again for governor in 1943 against the incumbent Governor Charles Edison, Moore respectfully declined.

Moore retired from public life and resumed his law practice in Jersey City where he lived on 350 Arlington Avenue (see photo to the right). He served as counsel for the Hudson and Manhattan Railroad. In 1945, Republican Governor Walter Edge named Moore to the state board of education.

Moore had a country home in Hunterdon County where he died at age 73 on November 18, 1952. Heis buried in New York Bay Cemetery. In 1953, the A. Harry Moore Apartments on Route 1 and Duncan Avenue were opened and dedicated in his memory. Mrs. Moore received an honorary degree of letters from Jersey City State College (now New Jersey City University) in 1963 when the A. Harry Moore School merged with the college.

Note: The date of birth of A.H.Moore found in several authoritative sources, as well as popular references, including the National Governors Association (online), New Jersey State Library Information Center (online), and the Encyclopedia of New Jersey (Lurie and Mappen), is July 3, 1879. However, according to the New Jersey birth record for Moore in Ancestry.com's New Jersey, Births and Christenings Index, 1660-1931 [database on-line] his actual birth date was July 1, 1877; Moore's U.S. World War I Draft Registration Card in Ancestry.com lists July 3, 1877, as his date of birth. The online version of the Biographical Directory of the United States Congress (online) notes July 3, 1877, as his birth date.

The A. Harry Moore School held its Centennial celebration on April 8th, 2022. It is one of the first public schools in the United States constructed for students with physical disabilities.

Designed by John T. Rowland, Jr., the rectangular Art Deco-style structure of white pressed brick is of different heights of four and five stories. Along the facade, above the top story windows, are panels of Egyptian influenced design. Below the windows are terra-cotta tiles with geometric panels. A ground-level entrance of brick with supporting piers extends from the center of the building's facade. An iron fence with brick piers surrounds the property. The two-story north wing features a solarium. The interior of the school has elevators, handrails, a corrective gymnasium, an auditorium, and other facilities for wheelchair-bound students. The curriculum provides the students with comprehensive services in the areas of physical therapy, professional occupational therapy, and learning disabilities.

About 1915, Dr. Henry Snyder, the Jersey City Superintendent of Schools, and Mayor Frank Hague both sought to found an elementary school for children with physical challenges. Groundbreaking for the construction of the unique school--Public School No. 36 at Clifton Place--began two years later, but it was not completed until 1921 due to design problems. Instead, the building became part of the Jersey City Medical Center, and the proposed school was temporarily relocated to the first floor of Public School No. 30. The new Superintendent of Schools Dr. James A. Nugent and Mayor Hague then enlisted Jersey City school architect Rowland to design a new building on Hudson (now Kennedy) Boulevard. Construction for the school began in October 1930 and was initially called the A. Harry Moore Home for Crippled Children.

Governor A. Harry Moore, for whom the school is named, was present when the cornerstone was laid on May 5, 1931, and the school opened the following September. Moore had obtained the funding for the school to serve children with special needs. In 1939, Moore, then US Senator from New Jersey, obtained Federal Works Progress Administration funds for an addition that included a natatorium, treatment rooms, and solarium.

The school was part of the Jersey City public school system until 1963 when the City of Jersey City leased the school to Jersey City State College (now New Jersey City University) as a laboratory school for its Special Education program. The A. Harry Moore School is presently funded by the State of New Jersey and continues its association with the University. Its enrollment includes students from Hudson, Bergen, and Essex Counties, whose local school districts contribute to the school's operation.