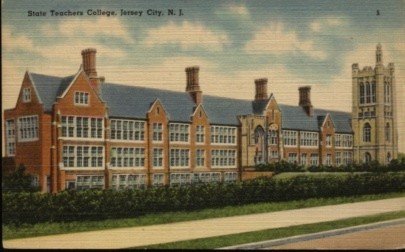 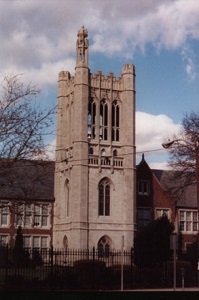 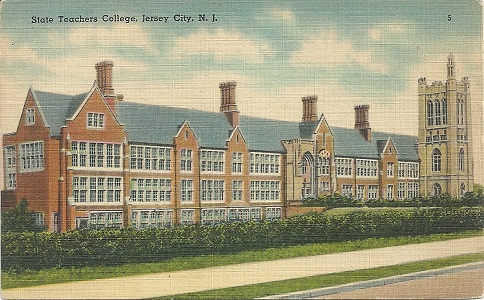 Although the founding principles and mission of this urban institution-- access and excellence -- have not changed, New Jersey City University's physical presence has changed dramatically. The campus has expanded six-fold; the number of buildings and facilities has grown from one structure to 26. The academic focus has expanded from normal school training to 32 undergraduate degree major programs and 19 graduate degree programs offered in three colleges; and the student body has grown to about 10,000 students from across New Jersey, the United States, and 50 countries around the globe.
(Adapted from an essay by Ellen Wayman-Gordon, Director of Public Information, New Jersey City University)

1927: The New Jersey State Normal School at Jersey City was chartered. The institution was built to accommodate 1,000 students and an eight-room demonstration school in its one building, Hepburn Hall, on ten acres on what was then Hudson Boulevard.

1929: The New Jersey State Normal School at Jersey City opened and immediately expanded its two-year teacher education curricula, making it the only teacher preparation program in the United States to offer a three-year program. A faculty of 12, which increased immediately to 29, served a student population comprised of 330 women and one man, who were mostly residents of Hudson County.

1935: The name was changed to New Jersey State Teachers College in Jersey City. The institution was authorized to offer a four-year teacher education program and award the bachelor of science degree in education.

1936: A degree program in health education and nursing was initiated in cooperation with the Jersey City Medical Center for the training of school nurses.

1946: The G.I. Bill enabled many veterans to enroll in the four-year Arts and Sciences Program, resulting in the rapid growth and expansion of the program.

1950: The Arts and Sciences Program was eliminated as a result of the graduation of many World War II veterans.

1955: The institution's first physical expansion took place: a small addition was made to Hepburn Hall, which enabled the Library to expand its holdings to 65,000 volumes; and Fries Hall Gymnasium was constructed. The institution graduated 83 students.

1959: The institution began to offer a master of arts in elementary education.

1962: Grossnickle Hall, a four-story academic building, opened. To enhance its special education program, Jersey City State College began to administer the A. Harry Moore School, and became one of the few colleges in the United States with a special-education demonstration school.

1966: The College's first Board of Trustees was named by the Governor, according to the Higher Education Act of 1966.

1973: The five-story Science Building and the JCSC Women's Center opened; the Cooperative Education Program was established with 25 students placed in paid work assignments.

1975: The Department of Nursing was established.

1977: Both the Department of Business Administration and the Peter W. Rodino Institute of Criminal Justice were established.

1980: The Department of Computer Science was created.

1982: The Department of Media Arts was formed.

1985: The institution was awarded a $5.7 million Governor's Challenge Grant for an expanded Cooperative Education Program, which would serve all academic majors. From that time, JCSC was known as New Jersey's premier cooperative education college.

1986: Autonomy was granted to higher education institutions in New Jersey.

1994: The four-story Professional Studies Building and the state-of-the-art Athletic and Fitness Center opened.

1996: The Center for Public Policy and Urban Research was established.

1997: President Carlos Hernandez appointed a task force to consider a change of institutional status and a name change.

1999: The University's four-story Forrest Irwin Library was completely redesigned and renovated to provide a spacious, modern facility equipped with the high-tech capability for study and research.

2000: The NJCU Library was dedicated in October and renamed the Congressman Frank J. Guarini Library.

2001: The University introduced myNJCU, the initial application of "portal" technology to provide members of the University community with a single integrated point for immediate access to personally relevant information, people, and processes, and to provide a gateway to resources available on the World Wide Web.

2003: A new two-story Visual Arts Building opened in September. The 56,000- square-foot structure is surrounded by a sculpture garden, the centerpiece of which will be a work by the sculptor Maya Lin, whose "Vietnam Memorial" in Washington, D.C. is internationally acclaimed.

The University Academy Charter High School opened in a redesigned commercial building on West Side Avenue. New Jersey City University joined with the City of Jersey City, the Jersey City Board of Education, and New Jersey Transit to collaborate on the "Bayside Project," a redevelopment proposal that is focusing on a 700-acre section of Jersey City that stretches from Communipaw Avenue south to Stevens Avenue and Bergen Avenue west to Newark Bay.

2005: NJCU dedicated the John J. Moore Athletics and Fitness Center in honor of the 1956 alumnus and former chair of the university's Board of Trustees, 1989-2005.

2006: The University dedicated the six-story, 77,000-square-foot, George Karnoutsos Arts and Sciences Hall. It was designed by renowned architect Michael Graves in collaboration with STV Architects of New York. The building of modular precast concrete features a pyramid tower that heightens the structure and an entrance with distinctive portico columns. It is named for Dr. Karnoutsos, a 1955 alumnus and retired professor of philosophy, who donated $2.5 million to the University. It also dedicated the William J. Maxwell College of Arts and Sciences in honor of Dr. Maxwell, a 1958 alumnus, former history professor, Dean of the School of Arts and Sciences, former president, president emeritus, and distinguished service professor of history and education.

2007: NJCU dedicated the Deborah Cannon Partridge Wolfe College of Education in honor of the 1937 alumna, teacher, theologian, and humanitarian.

2013: Dr. Sue Henderson was inaugurated president of NJCU--its twelfth president and the first woman to hold that post. She succeeds Dr. Carlos Hernandez who served the institution for nineteen years. Dr. Henderson holds degrees from the University of Georgia and Georgia State University. She previously was the chief operating officer and vice president of institutional advancement at Queens College of The City University of New York.

2015: The NJCU School of Business opened at Harborside Plaza 2 along the Jersey City waterfront and the city's financial district. The two-story instructional facility features a simulated trading floor and two data science centers. The Business School is associated with the university's Small Business Development Center, Business Development Incubator, and Institute for Dispute Resolutions.

The Confucius Institute opened at NJCU to teach the Chinese language and culture. The institute is in partnership with the Jilin Huaqiao University of Foreign Language, a private university in China.

2016: The university continues to develop University Place, its 21-acre West Campus between West Side Avenue, south of Carbon Place, and Route 440. The four-story student residence--the first of several proposed buildings--opened in September. It is a Public-Private Partnership--the first "P3" privatized housing project in the State of New Jersey. Five market-rate apartment buildings and a performing arts and residential building for the Joffrey Ballet School and its students are planned.

2019: The renovation of the Science Building on the main campus was completed. It houses the Biology, Chemistry, Physics, and Earth and Environments Sciences departments ad features research laboratories, a greenhouse, observatory, and Geographic Information Science Lab.

2021: The university opened an off-site campus location, Squier Hall,  at the former Army base at Fort Monmouth, expanding its presence in Monmouth County and the surrounding area.