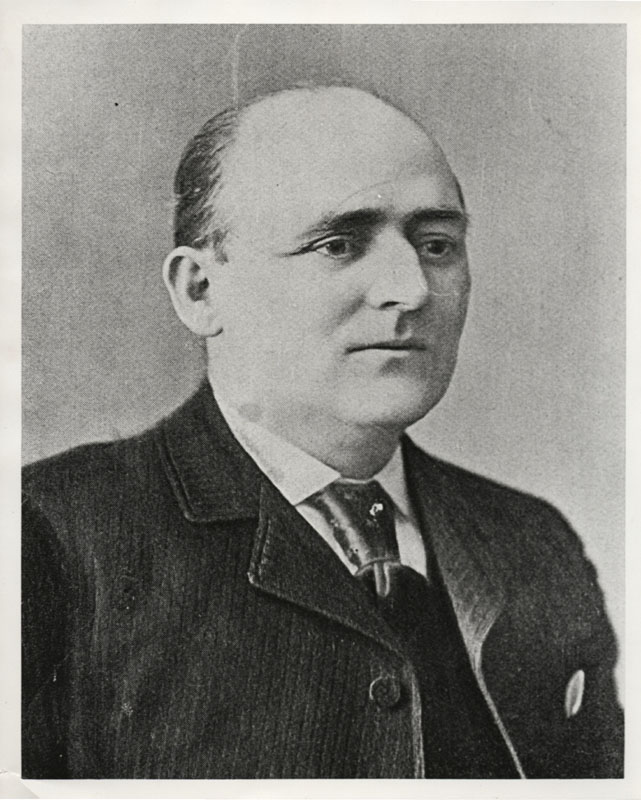 At the turn of the twentieth century, Robert "Little Bob" Davis was one of the most influential political leaders in Jersey City and New Jersey. He joined the Democratic party as a young man and rose to dominate the Hudson County Democratic Committee as party "boss."

Davis, born on March 6, 1848, was the son of Irish immigrant parents William and Eliza Kinling Davis and one of eleven children. The family moved to Jersey City when Davis was an infant and lived on Bright Street. Davis attended Public School No. 3 and St. Peter's R.C. Elementary School. By age eleven, he was working to help supplement the family finances. In 1868, he started to work as a gas meter reader and became an inspector for the Jersey City Gas Company.

Davis sought to build his local power base as president of his civic organization, the (Robert) Davis Association, and of the Fourth District Democratic Association. After working for the local Democratic party, his loyalty did not go unnoticed. Davis was twice elected a Jersey City Alderman (1885-1888) and a Sheriff of Hudson County (1887-1890). New Jersey Governor Leon Abbett appointed Davis a police justice (1891-1893) and in 1893 he was appointed warden (then called jailer) of the Hudson County Jail. An unidentified source commented: "It was a big job, one of the political plums of Jersey City, and it did much to build up Davis's power as a politician" ("Obituary of Robert Davis"). His last political appointment was as City Collector from 1898 to his death in 1911.

While Davis was a sheriff in 1889, a corrupt election in Jersey City for a New Jersey senate seat implicated Davis. The November 5th election was a contest between Democrat Edward F. McDonald and William S. Sturh, supported by Republicans and "dissident Democrats" (Mappen). Election results were overwhelmingly in McDonald's favor and prompted an investigation by the state senate where the Republicans enjoyed a majority. The supposed tamperproof glass-sided ballot boxes from the election were shipped to Trenton. The investigation found irregularities with voter registration in some precincts in Hudson County. There were ballots cast by voters in the same order as their registration before the election and voting privileges granted to residents with bogus addresses, New Yorkers, and even the deceased.

According to New Jersey historian Marc Mappen, "The Senate investigators found that the boxes had been stuffed with so-called 'joker ballots'--counterfeit pre-stamped ballots that were folded inside legitimate ballots so that a faithful party man could cast two or more votes at the same time. The counting mechanism on one box in the Seventh District of Jersey City indicated that 404 ballots had been cast; inside were 507" ("Jerseyana," New York Times). Also, Mappen continues, "Much of the fraud occurred after the election, when burly Hudson County policemen kept the public away while the Davis boys in the back room, with their bowler hats and cigars, counted the votes. Stuhr's ballots were reported to have been removed from the ballot box and burned or tossed in the street."

Having confirmed fraudulent practices, the state senate voted to seat Stuhr. His tenure was short-lived, however, when the Democrats gained the majority in the next senate election and turned out Stuhr to seat McDonald. Although over sixty Hudson County Democrats were proven guilty of election fraud, Davis seems to have used his influence to delay their incarceration for two years. Davis himself was never indicted. Mappen concludes "that whole investigation was a case of rural Protestant Republicans pulling the squeeze on urban Catholic Democrats" ("Jerseyana," New York Times).

Commenting on his political acumen, Alexander McLean in his History of Jersey City describes Davis as follows: "His talent for organization and his executive ability, with his strong friendship, have enabled him to exercise a control over political affairs in Hudson County for many years" (414). It is said that Davis was responsible for the choice of Woodrow Wilson, the president of Princeton University, as the Democratic party candidate for New Jersey governor in 1910.

On January 11, 1911, Governor-elect Wilson attended the funeral service of Davis held at St. Peter's R.C. Church. He was accompanied by Joseph P. Tumulty, a Jersey City attorney. Tumulty, a graduate of Saint Peter's College (now Saint Peter's University), then on Grand Street, later became an advisor to President Wilson. Among the other mourners attesting to the political stature of Davis were Jersey City Mayor H. Otto Wittpenn, Democratic State Chairman James R. Nugent, and former US Senator James Smith, Jr. The flags at City Hall were lowered in his memory.

A successful businessman, Davis owned the controlling shares of the Jersey City Supply Company and the Jersey City Baseball Club. He lived at 239 Grove Street. In an obituary notice, the Jersey Journal reported the Davis estate at one million dollars, claiming that he owned seventy-five pieces of real estate in the city as well as other securities.