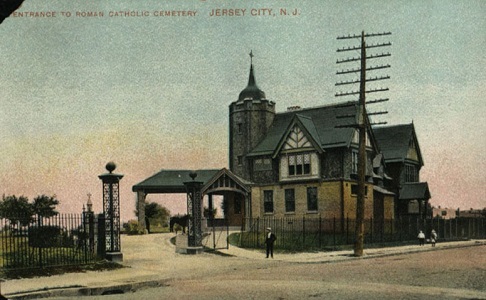 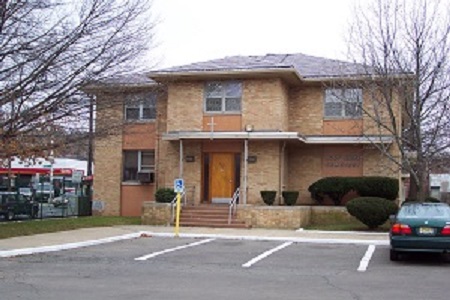 Holy Name Cemetery
823 West Side Avenue, between West Side and Tonnelle Avenues

Holy Name Cemetery, the Roman Catholic burial ground in Jersey City, is administered by the Catholic Cemeteries of the Archdiocese of Newark. With 68-acres on West Side Avenue, it is the city's largest cemetery with over 267,000 burial plots and mausoleums. Begun in 1866, it was named the Hudson County Catholic Cemetery. In its earliest days, the cost of a single plot was $10.

The city's Catholic burials originally took place at St. Peter's Cemetery, founded ca. 1849, on land west of Tonnelle Avenue (now Truck Routes 1 & 9). When it became overcrowded for Hudson County's large and growing Roman Catholic population, land on West Side Avenue was donated for a new and much larger cemetery. By the twentieth century, access to St. Peter's Cemetery from Tonnelle Avenue became increasingly difficult, and the Archdiocese curtailed burials in 2003. Its records are maintained by Holy Cross Cemetery in North Arlington, NJ.

Holy Name Cemetery is remarkable for its beautiful monuments and artwork. Joseph Verzi of Catholic Cemeteries comments that the early statuary and elaborately carved stone monuments were the creative work of local artisans. They needed employment "so they made gorgeous statues for the cemetery." Verzi claims before the Depression the cemetery's artwork came from building construction in New York City: "A lot of the fancy artwork for those buildings ended up being shipped over to the cemetery for memorials and markers, some as high as 10 stories; big crosses and statues came from those buildings. It was the only work the artists had." (Rounds, Jersey CITY Magazine)

A section of the cemetery is dedicated to the burial of priests and nuns from the city's Roman Catholic parishes and parochial schools. Veterans from the Civil War and Spanish-American War have been buried there as well.

In 2005, due to a shortage of land for burials, a granite mausoleum with 1,300 crypts was built for new interments. A neoclassical two-story granite mausoleum was added on West Side Avenue in 2010. Among the stained glass windows in the latter are windows from the former St. Boniface Roman Catholic Church in Jersey City, founded in the 1860s. Designed in Austria for the church's German congregation and completed in 1896, they lend a historic feature from the community to the contemporary memorial facility. The cemetery has continued to expand.