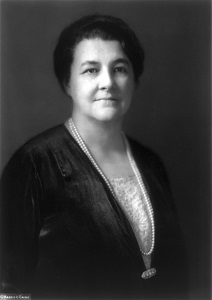 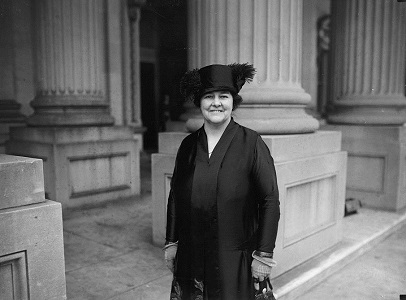 Congresswoman Mary T. Norton was one of Jersey City's most prominent political figures during the era of Frank Hague, with the possible exception of the mayor himself. Service and loyalty to her party, her mentor, and her constituents marked Norton's long political career. It ran parallel to Hague's control of Jersey City and President Franklin Delano Roosevelt's national leadership through the Depression and World War II. Known as a "New Dealer," Norton gained prominence as a legislator who championed the cause of the working poor, especially in her Hudson County congressional district.

Norton was born in Jersey City in 1875, the eldest daughter of Irish immigrants Thomas Hopkins, a construction worker, and Maria (Shea) Hopkins, a homemaker. She attended a local parochial school but she did not complete her elementary education in consideration of her family's financial situation, a fact not revealed during her lifetime. She pursued an informal education at home with the assistance of her brother James. The family resources were reserved for James to be educated for the priesthood--not an uncommon sacrifice for daughters in Roman Catholic families of the times. James Hopkins did not become a priest after all, but he became the principal of Dickinson High School (then the High School of Jersey City) and later Superintendent of Schools in Jersey City.

Norton's mother died when she was seventeen. When her father remarried, Norton and her two sisters, Anne and Loretta, moved to an apartment in New York City, attended Packard Business College for secretarial training, and worked in clerical positions to support themselves.

In 1909, Norton married Robert Francis Norton, a widower with two children (raised by his mother) who managed a cooperage firm in Jersey City. Their only son, Robert, died in infancy the following year. To adjust to the fact that she could not bear children, she turned to public service and volunteer work. In 1912, she helped launch the "Queen's Daughter's Day Nursery," a nonsectarian day-care center at St. Joseph's R.C. Church basement. From her years in the workforce, she knew the concerns of working women for their children and worked on their behalf at the nursery for fifteen years, three as secretary and twelve as president. During the World War I years, she also organized a Red Cross workroom for women in the parish hall basement.

Norton's social activism at St. Joseph's ran parallel to the national suffrage movement in which she was not involved. She was not opposed to suffrage for women, but, at the time, politics was not in her sphere of interest. Mayor Hague would soon dispel that notion.

In 1920, after the suffrage amendment was passed, Hague was determined to recruit women to the Democratic Party. Hague had met Norton years earlier when she requested funds for the daycare center--and he was impressed. If she could translate that drive from her social work to the political organization of women in the Democratic Party, his future in Jersey City, Hudson County, and even the state, would be assured. Norton was overwhelmed by the offer but humbly recommended that a woman identified with the suffrage movement might better serve in the role. Norton eventually accepted the challenge and organized women to participate actively in the Democratic Party.

Progressing in her political career, with Hague's support, Norton became the first woman member of the Democratic State Committee. In 1923, she was elected the first Democratic woman freeholder (now commissioner) in New Jersey on the Hudson County Board of Freeholders (now Commissioners). She successfully obtained Board approval for the construction of a maternity hospital in Jersey City at County expense, a special project of "Boss" Hague. Her interest in the hospital was that the infant mortality rate in Hudson County in 1923 was 212 per 1000 births (Norton Ms). Hague counseled her for a gradualist approach to win over the Board. Using this strategy and Hague's behind-the-scenes support, Norton saw her proposal adopted. With its approval, the Margaret Hague Maternity Hospital, named after the Mayor's mother, was begun. Hague then asked Norton to become the first woman member of the Democratic State Committee, on which she served until 1944.

In 1924, with Hague's encouragement, Norton became a candidate for the House of Representatives from the New Jersey's Twelfth Congressional District (Bayonne and Jersey City). The elections that year were slated to be a Republican sweep nationally, but Norton believed that the women she had met throughout the community would come out to support hers. She won the election by a plurality of 17,000 votes over her opponent, an astonishing victory for the time, even in a Democratic stronghold. She was the first woman Democratic elected to Congress from an eastern state and represented her district from 1925 to 1951 or thirteen successive terms. When she was elected in 1924, she lived at 90 Reservoir Avenue in Jersey City.

During her tenure she served her constituents well, becoming the chair of three Congressional Committees, Veterans Affairs, the District of Columbia, and Labor. On these committees, she obtained funds for the construction of the first veterans' hospital in New Jersey. She championed home rule for the District of Columbia and the Fair Labor Standards Act, which established minimum wage rates for workers in interstate commerce. In 1932, Norton led the Democrats in Congress for the repeal of the Eighteenth Amendment for Prohibition and called the "Noble Experiment" a mistake.

As the Depression progressed, Norton sought New Deal funds to alleviate the unemployment crises in her district, which were important to Hague. On March 23, 1936, he wrote to Norton about additional funding for the enlargement of the Margaret Hague Maternity Hospital: "I want you to take this matter to Harry Hopkins [Director of the Works Progress Administration] yourself and stay with it until you put it over." He adds: "I know of your interest in this hospital; you are the one who introduced the resolution in the Board of Freeholders that created it. It would be a nice thing if you were to finish the job by obtaining approval for this project. The other is for a Nurses' Home, to house the nurses for the Maternity Hospital and the Hudson County Tuberculosis Hospital [Pollak], which is now nearing completion" (Norton Ms.).

Hague's requests to Norton for more money for the Medical Center from the Congress went on until after 1939, but they brought no results over concerns about the "impending war" in Europe. Norton's pursuit of a loan contract for low-rent housing in Jersey City in 1939, however, met with Roosevelt's approval and an award of a loan of $3,090,000 from the Federal Works Agency.

As Hague predicted, Norton was a good role model for women in politics. She advocated the full participation of women as voters, party members, and candidates for office, and at all levels of government. For Norton, women's political activism was not an issue of women's rights but as women's rightful place in American democracy. True to her Roman Catholic background and constituency, however, she voted against the Gillette Bill that proposed federal funding for the dissemination of birth control information.

During World War II, she sought federal funds for day-care centers for working women under the Lanham Act. She never forgot her volunteer work in Jersey City and the problems of working women with children. She identified the issues of maternity leave, child care, "latch key" children, displaced homemakers, and equal pay for equal work among her legislative concerns. Consistent with this position, Norton opposed  Alice Paul's proposal for an Equal Rights Amendment to the US Constitution on grounds of the loss of protective work laws for women.

In recognition of her work, Mary Norton received many honors. On August 24, 1942, Mayor Hague proclaimed August 26, 1942, as "Mary Norton Day," celebrated at Roosevelt Stadium, before a baseball game, with thousands in attendance. She received a gold watch from the Mayor who praised her, "For her loyalty to the President [Roosevelt] and to the people" (Norton Papers). At the time, she was the only Democratic representative from New Jersey and the dean of the New Jersey Congressional delegation.

It has long been debated whether Norton worked in Congress independently of Hague or was there to do his bidding. Throughout her career, Norton denied interference from Hague and the supposition that she was in daily contact with him. She claimed that, as a new member of Congress, she once asked Hague how to vote on an issue. He responded, "You're on the spot. If I didn't think you had brains, I wouldn't have sent you." (Norton Ms.) To the end of her career, Norton was loyal to Hague, whom she called her "political foster father," and to the Democratic Party. In many instances, Norton's legislative agenda for her constituents transcended those of Hague and her legislative successes benefited Hague's constituents as well.

In 1951, at the age of seventy-five, Norton retired from the House of Representatives. It closely marked the end of the Hague regime in Hudson County. Norton sold her residence at 90 Reservoir Avenue in 1926. Upon her retirement, she moved from 2400 Hudson (now Kennedy) Boulevard to Greenwich, Connecticut, where she died at age eighty-four on August 2, 1959.

In 1996, Hudson County Community College dedicated one of its conference rooms to Norton. To celebrate Women's History Month in March 2001, an official portrait of Norton was hung in the office of House of Representative Minority Leader Nancy Pelosi. The Mary Norton Manor, a 45-unit workforce housing project at 23-25 Duncan Avenue, is named for the long-time congresswoman from Jersey City.