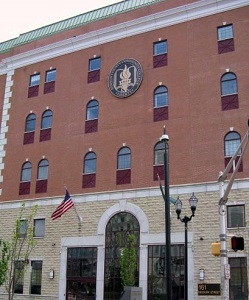 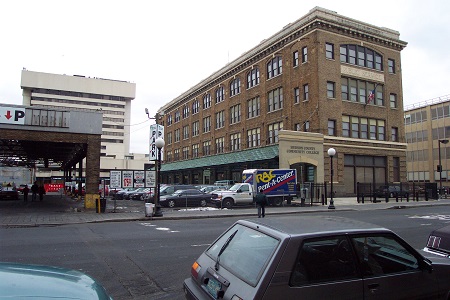 Founded in 1974, HCCC is a two-year public, coeducational community college begun as one of the two "contract" colleges in the United States and New Jersey's only contract college. As such, the institution contracted for faculty and facilities to grant occupational and career-oriented certificates and Associate in Applied Science degrees to students. Its mission was to offer programs that reflected the current job market. Its founding was during an era of fiscal restraints for central campus funding with a permanent faculty.

By 1992, after years of financial problems and a New Jersey chancellor of higher education mandate for reform, the County of Hudson made a commitment to reorganize HCCC with an urban-style campus and expanded services. The HCCC revitalization began with the takeover of the historic Pathside building that was converted into classrooms and a library. Designed by Jersey City architect John T. Rowland, the former Public Service Building (now PSE&G), completed in 1912, served as the company's trolley terminal and office building. In 1996, a board room was dedicated to Hudson County Congresswoman Mary Teresa Norton (1925-1951).

In 2017, the Jersey City Redevelopment Agency bought the four-story Pathside building for a new city-owned museum and community center for $9 million. In 2021, the city announced plans for the former industrial building to become the North American satellite for the Pompidou Center, a Paris art museum, that is expected to open in 2024. Other Pompidou satellites are in Malaga and Shanghai.

Campus Expansion
HCCC offers classes in business and marketing, computer science, health sciences, home economics, law, culinary arts, and multi-interdisciplinary studies. It offers a two-year transfer program through an Associate in Science (A.S.) or Associate in Arts (A.A.) degree to a bachelor's degree program and an Associate in Applied Science (A.A.S.) degree in a professional field.

Adding to its Journal Square campus, the HCCC Library building opened at 71 Sip Avenue in 2014. The six-story multipurpose facility, designed by NK Architects of Morristown, features a rooftop terrace overlooking Jersey City and Manhattan and a 9/11 monument fashioned from a World Trade Center column. In 2015, the Benjamin J. Dineen, III, and Dennis C. Hull Gallery opened on the sixth floor. The gallery's first exhibit displayed selected works from the collection of New Jersey and American art donated to the college by Mr. Dineen and Mr. Hull.

The college's six-story Science, Technology, Engineering and Mathematics (STEM) building at 282 Academy Street in the Bergen Square neighborhood is expected to open in September of 2017.