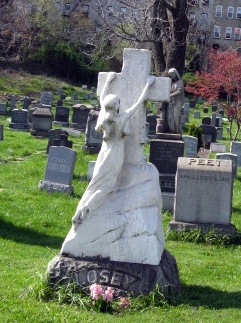 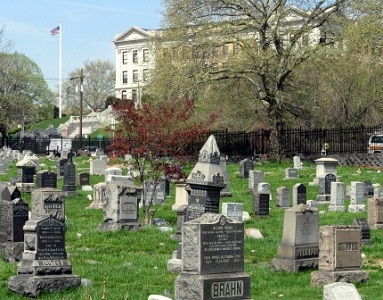 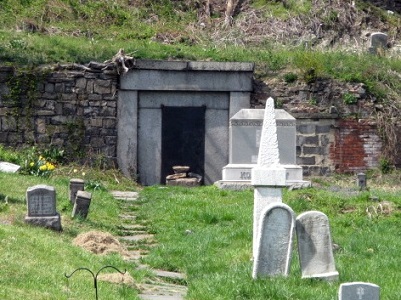 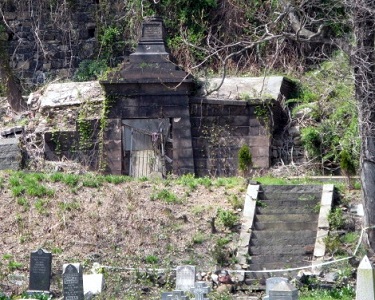 T. Mark Nonestied, in his article "Burial Reform at the Jersey City & Harsimus Cemetery" (GardenStateLegacy.com, June 2011), desribes New Jersey's first incorporated cemetery: " [It] . . . reflects a transition between the colonial graveyards and the garden cemeteries of the Rural Cemetery Movement. The cemetery encompassed design features from both types of burial grounds but never fully embraced one or the other."

Located on 5.5 acres south of Newark Avenue, the site dates back to the Revolutionary War when General Marquis de Lafayette and British forces clashed in 1780. During the War of 1812, the grounds were used as an ammunition bunker and lookout point, and again for military training during World Wars I and II. The hills may have even concealed tunnels for Jersey City's Underground Railroad to help fugitive slaves.

The cemetery's origins, it is claimed, date back to 1829. Residents wished to bury an unidentified man who washed up on the shore off Paulus Hook. They collected money for the plot and a marker, but they refused to pay the sexton the additional $12 fee to open a plot purchased in the  Old Bergen Church Cemetery. Concern about recent cholera outbreaks in New Jersey, as in nearby Bayonne, may have been the basis for the additional burial fee.

A meeting about local burials was held at Hugh McCutcheon's Farmers' Hotel at 42 York Street. The outcome was the formation of a cemetery company, independent of the church burial ground at Bergen. The new cemetery on Newark Avenue was founded and incorporated on February 9, 1831. David Cadwallader Colden, son of New York City Mayor Cadwallader Colden and an investor in the Associates of the Jersey Company, became the president of the board of trustees The Gatekeeper House on the site dates back to the cemetery's incorporation.

Nonestied writes that William F. Bridges surveyed the cemetery using ". . . a grid system with 18 foot by 18 foot family plots and 12 foot by 18 foot vault lots that were divided by the main cemetery road, 12 foot cartways and 6 foot pathways. The total number of lots was 347 . . . ."  Subscribers purchased lots for $20, each with a $5 down payment. They as owners elected a board of trustees. According to Nonestied, it "gave the lot holders the authority to elect a board that would manage and govern the cemetery" away from ecclesiastical control. Delinquencies in subscriber payments, however, handicapped the board with the upkeep of the grounds.

By the 1850s, the Jersey City and Harsimus Cemetery introduced the new features of the Rural Cemetery Movement with the landscaping of trees, plants, and flowers, an iron gate, retail greenhouse, and caretaker's house. Like other garden-style cemeteries, it became a destination for visitors to view the plantings and monuments. Nonestied adds, ". . . visitors had become such a problem that they were soon required to procure tickets for admission."

The cemetery's location at Bergen Hill permitted the construction of vaults and elaborate monuments. "The receiving vault . . . initially started as three private family vaults, built in the 1830s for the Colgate family," remarks Nonestied. William Colgate, the founder of Colgate's Soap and Perfumery Works, later Colgate-Palmolive Peet, was one of the first subscribers, but the family members were later reinterred at the Green-Wood Cemetery in Brooklyn. The family members of Isaac Edge are buried in a brownstone vault in the cemetery. The burial grounds contain the graves of many Civil War soldiers.

According to Colin Egan, "From its inception the cemetery has served the people of downtown Jersey City and bears witness to the area's changing ethnic make-up." There are markers for the descendants of early Dutch and English settlers like Jacob Van Riper and May Rood Drayton. Monuments also give witness to the numbers of Germans, Russians, Polish, and Italians who arrived in America at the turn of the twentieth century. Among the markers, the oldest is that of Andrew Gammell, who died June 22, 1830.

The popularity of the cemetery began to wane in the 1850s from the founding of New York Bay Cemetery, "a garden style burial ground." Nonestied comments that, in an attempt to compete for space and profitability, "In 1876, the [Jersey City and Harsimus Cemetery] burial ground was resurveyed and all unsold family plots were converted to single plots." The sale of plots continued through the twentieth century.

In 1955, for the cemetery's 125th anniversary, the Hudson Dispatch writes: "Stretching out like a huge octopus with the passing years, the city has all but enveloped that once quiet and secluded section. To the north and west, city streets entwine the cemetery, and to the south, the Pennsylvania Railroad has the right-of-way. Still free on the east, however, it is bordered by Mary Benson Park, a favorite recreation spot for children."

Although the cemetery's location posed limitations for expansion, the cemetery has served the community "to provide a fit and proper burial place" (quoted in Nonestied) for its departed and, when founded, fulfilled a Rural Cemetery Movement's purpose to develop cemeteries away from potential industrial areas. The historic cemetery appeared in several episodes of the HBO-TV series The Sopranos.

The Jersey City and Harsimus Cemetery is run by an independent board of trustees, reorganized in 2007. Eileen Markensteen, president of the cemetery (2007-2020) was instrumental in the reorganization of the cemetery operations for it be serve the community as a cultural space. Volunteers work to maintain the monuments, tombstones, and grounds. In the spring, several goats from upstate New York are welcomed on the grounds to graze on the growth of poison ivy and Japanese knot wood.