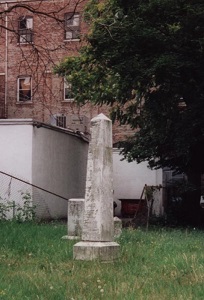 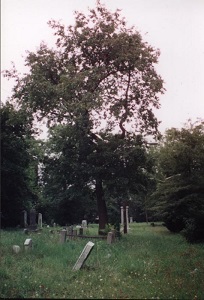 Speer Burial Ground is located on Vroom Street, a few blocks away from Journal Square and a block away from the Old Bergen Church Cemetery. It was begun on the DeMott estate at the border of historic Bergen Square. According to Janice K. Sarapin in Old Burial Grounds of New Jersey, A Guide, it is an example of a graveyard that evolved from a private family resting place to a potter's field and finally to a cemetery owned by Abraham Speer (5).

The L-shaped cemetery of slightly over one acre was the burial site for the DeMott family members, Dutch settlers from the 1660s. There is evidence of the underground DeMott family brick vault and tombstone on the property. Although known as the "oldest cemetery of European settlers in New Jersey," the earliest surviving marker in the cemetery is dated 1756.

Speer was a Jersey City undertaker. He bought the burial ground in 1857 and sold individual plots for $16 each. The absence of records makes it impossible to verify who and how many have been buried in the cemetery over the years. Headstones indicate the burial of veterans of the Revolutionary War, War of 1812, Civil War, and Spanish-American War. Its last interments occurred during World War I.

According to Sarapin, "The best guess is that several hundred persons were buried at Speer, with about 160 grave markers made from sandstone, marble, and granite. Speer is known to have been used as a potter's field in the 1800s. Some estimate that thousands of paupers may have been buried there without markers or records" (60).

Frequently called Jersey City's "forgotten cemetery," Speer Burial Ground has long been neglected and abandoned. A chain-link fence with a gate on Vroom Street was erected in the 1970s to preserve the historic site. A rededication plaque placed at the cemetery on Memorial Day, 1979, indicates that efforts were made to restore the cemetery, but the work was not completed.