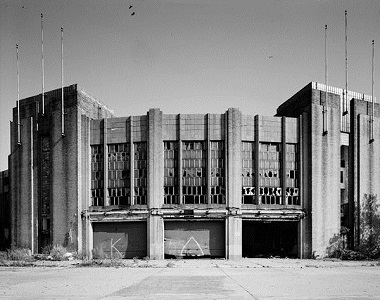 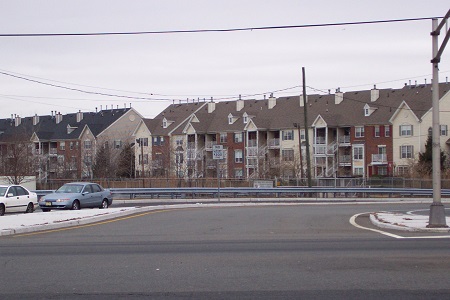 Roosevelt Stadium
Newark Bay, off the Hackensack River and West of the
The intersection of State Route 440 and Danforth Avenue at Droyers Point
Greenville

Roosevelt Stadium was located on nineteen acres, donated by Jersey City, at Droyers Point at the foot of Danforth Avenue and opened on April 22, 1937. At the stadium's first athletic event that day, the Jersey City Giants lost to the Rochester Red Wings, 4-3, with 50,000 tickets sold at the new 24,500 seat stadium. The facility was one of Hudson County's largest funded projects under the federal Works Progress Administration and was built for $1.5 million. It is best known as the stadium where Jackie Robinson became the first African-American to play major league baseball.

Designed by architect Christian H. Ziegler, it was to be called Veterans' Memorial Stadium. Instead, Mayor Frank Hague (1917-1947) named it for President Franklin D. Roosevelt, whose New Deal program brought jobs to Jersey City during the Depression.

From Airport to Stadium

Roosevelt Stadium was not the first development at Droyers Point in the southwest section of Greenville. The reclaimed land on the Newark Bay/Hackensack shoreline was initially used for the Jersey City Airport in the late 1920s. The isolated tract of land came to the attention of the aviator Clarence D. Chamberlin (1893-1976). He made aviation history after his nonstop 43-hour air flight across the Atlantic Ocean to Germany, with a passenger, on June 4, 1927, a few weeks after Charles Lindbergh's famous solo transatlantic flight.

In September 1928, Chamberlin purchased the Chadwick Cotton Mill owned by the Clark Thread Company, located between Lembeck and Linden Avenues. Chamberlin planned to construct an airplane manufacturing plant called the Crescent Aircraft Corporation. Jersey City then leased Droyers Point on Newark Bay, not far from his factory, for the Jersey City Airport, and Chamberlin was named manager of the airport. He later began the Chamberlin Flying Service at 372 Lembeck Avenue.

The city allowed Chamberlin to use the property at Droyers Point as an additional landing field. By 1930, two runways were completed and plans were set for the airport, a flying school, and air passenger service.

Even with its optimum location to serve New York City, Staten Island, and areas of Northern New Jersey, the airport project fell victim to the times. By May 1935, Jersey City was deep in the grips of poverty and unemployment--the eventual toll of the stock market crash in 1929 and the resulting Depression. Chamberlin had also suffered financial reverses affecting his investments in Jersey City.

In the meantime, hoping to create construction jobs for Hudson County's struggling working-class, Mayor Hague had applied for federal funds under the Civil Works Administration and Works Progress Administration of President Roosevelt and his New Deal program. Under the terms of the grant program, the money received could not be used for the purchase of land. To obtain the grant, the city had to contribute land for a project. According to Mayor Hague, the only city-owned property available at the time was Droyers Point and the best use of the site was the construction of a municipal sports stadium and the abandonment of the airport. He claimed that the stadium would be a self-sufficient operation and employ 250 men on a seasonal basis, while the airport would eventually be a financial liability to the city.

Hague's decision to eliminate the Jersey City Airport was not unanimously popular. On October 13, 1935, nine airplanes sponsored by the "Save the Airport Committee," staged what was called an "aerial protest demonstration." One of the planes flew a large banner "Save the Jersey City Airport" as they circled the city. Hague, however, was not dissuaded and insisted that Droyers Point "was the only municipally owned ground available" (quoted in New York Times 12 December 1935).

The recreational facility may have been one of Hague's most progressive achievements for the industrial community. Frank Borsky of the New York Times commented: "It was the paradigm of elegance in a blue-collar town. It had the panache and an almost human-like quality, a personality of its own. It was our stadium, a center of the socio-economic-political fabric of Jersey City. When it was being built during the Great Depression, it provided 2,400 jobs for Jersey City unemployed" (1 July 1984).

Considered the best minor league baseball park of the time, Roosevelt Stadium was constructed of steel and concrete and featured marble from Pennsylvania and Tennessee. The Art Deco bowl-shaped stadium was surrounded by a concrete wall with a terra cotta facade. Terrazzo flooring covered most of the facility. The grandstand consisted of terraced seating of 35 rows and bleachers, and multiple ramps gave easy access to the seats. The roof rose sixty feet from the ground.

Of all of the events held at Roosevelt Stadium, the most historic was undoubtedly the debut of Jackie Robinson of the Brooklyn Dodgers on April 18, 1946. The 27-year old Robinson broke the "color line" in professional baseball when he stepped into the batter's box, his first game in organized baseball. Brooklyn Dodger president Branch Rickey had signed up Robinson six months earlier amidst much controversy. A college football and track star, Robinson had played one season with the Kansas City Monarchs of the National Negro League. Rickey sent Robinson to the Dodgers' Montreal team, the Royals, where he played second base.

On what was to be a landmark day in American social history, the stadium, which was the home of the Giants of the International League, had an overflow crowd. The sale of 52,000 tickets, double the park's capacity, brought spectators from New York City via the Hudson Tubes, from Philadelphia, Baltimore, and elsewhere. Mayor Hague closed schools and required city employees to purchase tickets for the Opening Day of the baseball season. More African Americans than usual were in attendance at the game. Hague threw out the first ball.

In his five trips to the plate, Robinson made four hits, including a three-run homer, scored four times, and drove in three runs; he also stole two bases in the Royals 14-1 victory over the Jersey City Giants. The press reports that Robinson was booed after he was introduced at the stadium. The Giants were the home team with an avid following but were not regarded as the better team. Larry Babich, a Jersey Journal sports columnist, writes "When the game ended, Robinson was mobbed by well-wishers Black and white, who wanted to shake his hand." (Reprint, Jersey Journal, April 27, 2021)

In 1947 Jackie Robinson began his career in major league baseball with the Brooklyn Dodgers for whom he played second base until his retirement in 1956. He was the first Black baseball player inducted into the Baseball Hall of Fame in 1962, and in 2005 was posthumously awarded the Congressional Gold Medal.

Sports fans recall other noteworthy events at the Roosevelt Stadium: In 1940, Max Baer beat "Two Ton" Tony Galento in a heavyweight bout, and Mickey Vernon of Jersey City played for the Giants. In 1950, Sugar Ray Robinson defended his welterweight title. The following year, "Jersey" Joe Walcott beat heavyweight champion Ezzard Charles. On September 21, 1948, European champion Marcel Cerdan of France defeated Tony Zale for the world middleweight crown in one of the Tournament of Champions bouts at the stadium. In the film, La Vie En Rose (2007) director Olivier Dahan includes Cerdan's romantic relationship with French chanteuse Edith Piaf. She is shown praying to St. Therese de Lisieux for the pugilist at ringside, claimed to ber her practice whether physically present at his fights or not. Cerdan overcame Zale in the twelfth round.

The Brooklyn Dodgers played seven games at the stadium in 1956 and 1957. They were hoped to convince the authorities in Brooklyn to replace Ebbets Field before moving to Los Angeles in 1958. Many remember when Willie Mays of the New York Giants hit the only ball out of the stadium to beat the Dodgers 1-0 in 1956. It was also the venue for many exhibition games and football organizations, such as the Atlantic Coast Football League, the old American Football League, the Jersey Jays (1963-1964), the New York Giants football team training camp (1966), and the Jersey City Jets (1970-1971).

Roosevelt Stadium was used by the local schools and colleges for sports and graduations. New Jersey City University (former Jersey City State College) began its football program there in 1966 before it built the Thomas M. Gerrity Sports Complex at the adjacent Tidelands. St. Peter's Prep and Dickinson High School held their Thanksgiving Day Classic football game there for many years. Hague also used the stadium to garner political support and demonstrate his ability to gather a crowd. He declared August 26, 1942, "Mary Norton Day" at Roosevelt Stadium to honor the US Congresswoman before a baseball game, with thousands in attendance. On the Fourth of July each year, a fireworks display and live entertainment were presented for the enjoyment of his constituents.

By the 1950s, attendance began to falter at the sports stadium. The Giants were no longer a part of the International League, and newer pastime activities competed for the spectators' attention. As a result, different events were scheduled at the stadium after the 1960s--rock concerts, professional wrestling, ice skating, drum and bugle corps competitions, and meetings of the Jehovah Witnesses. The Allman Brothers, Beach Boys, Eric Clapton, Tony Bennett, Grateful Dead, and Crosby, Stills, Nash and Young, among other performers, used the stadium. An ice skating rink became a popular winter attraction at the stadium, but it cost more to maintain the facility than the incoming revenue.

In 1970, renovation of the stadium included re-sodding of the playing field and overhaul of the drainage, roofing, and steam heating systems. However, renovation to the structure was impeded by asbestos and decay. In 1978, a thirty-foot light tower fell off the roof, which weakened the stadium's exterior walls and light towers. The athletic facility built to alleviate the financial woes of the city during the Depression became a liability. By 1985, the stadium was demolished. One seat from the stadium was donated to the Baseball Hall of Fame in Cooperstown, New York, and one to the Smithsonian Institution in Washington, DC.

Once again, Droyers Point was available for economic development. A few years later, the K. Hovnanian Companies of Red Bank, NJ, took on the task of building Society Hill, a condominium development on 90 acres for $150 million.

On April 17, 1996, the Hovnanian corporation placed a plaque in the gazebo at Society Hill for the fiftieth anniversary of baseball's opening game at Roosevelt Stadium since the end of World War II. It commemorates Jackie Robinson's landmark baseball game on April 18, 1946. The plaque reads: "His leadership and grit changed baseball and deeply influenced public opinion. He bore freedom's torch to serve family, sport, business, government and family" (quoted in Sterling 18 April 1996).

A sculpture of Jackie Robinson stands in front of the PATH terminal at Journal Square. Dedicated on February 16, 1998, the twelve-foot bronze statue by Susan Wagner was sponsored by the Jackie Robinson Foundation, the City of Jersey City, the NJ Department of Commerce and Economic Development, the NJ Sports History Commission, and the Port Authority of New York and New Jersey.