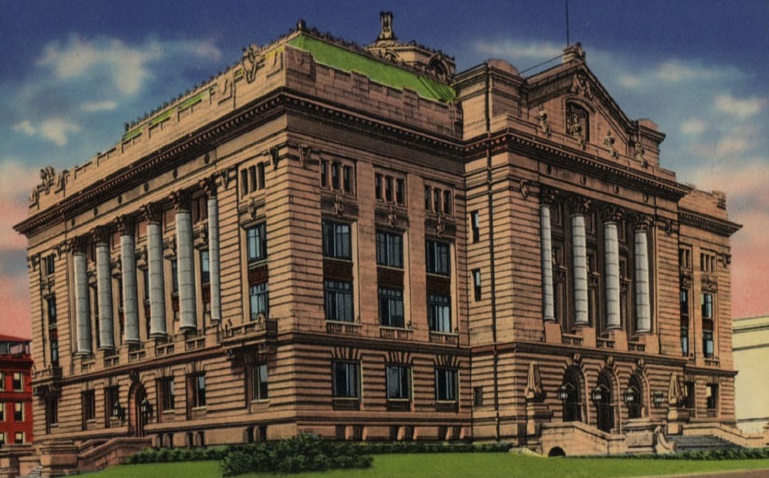 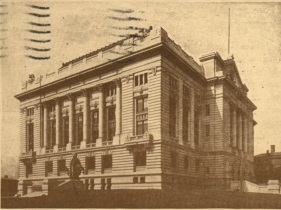 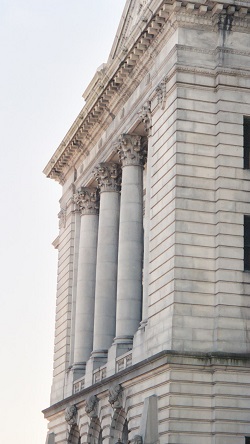 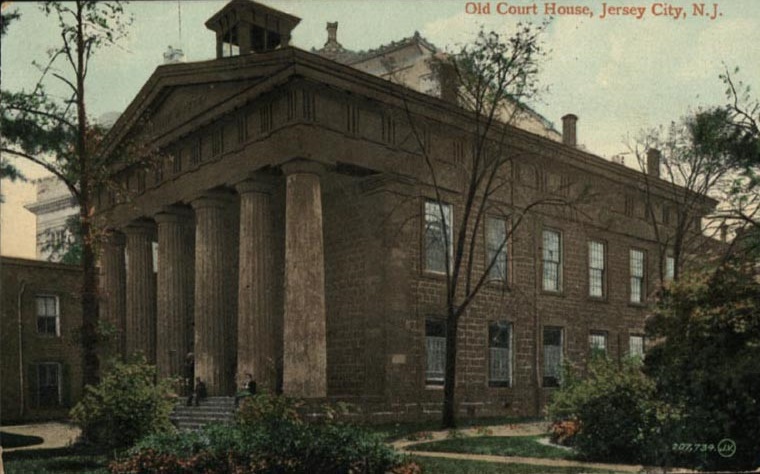 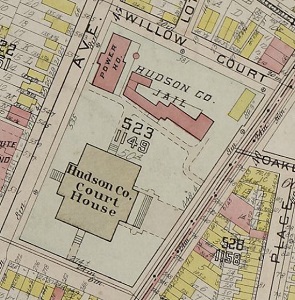 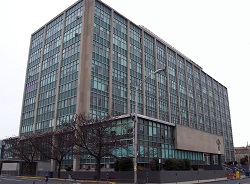 Hudson County Administration Building (595 Newark Avenue) By 1964, the structure was expanded upwards with additional stories so as to accommodate all aspects of the county court system.
Photo: P. Shalhoub, 2002 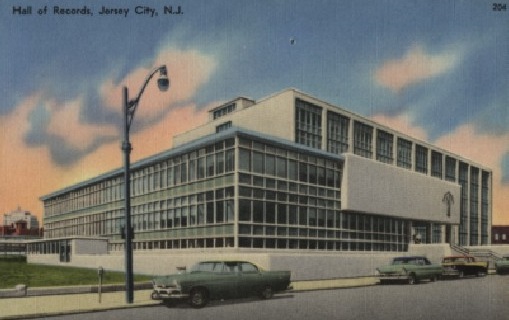 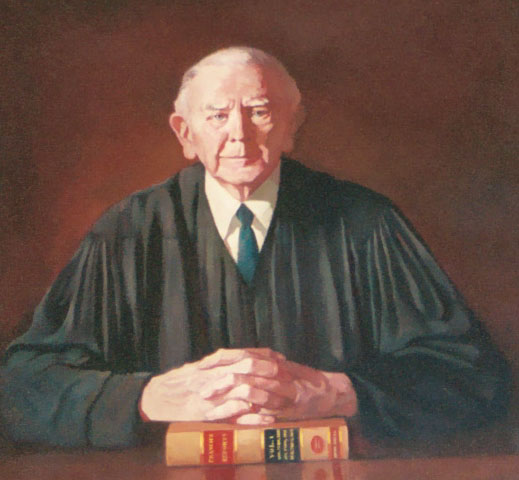 Portrait of Justice William J. Brennan in the 1910 courthouse named in his honor.
Photo: C. Karnoutsos, 2008 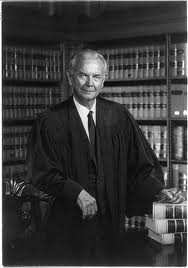 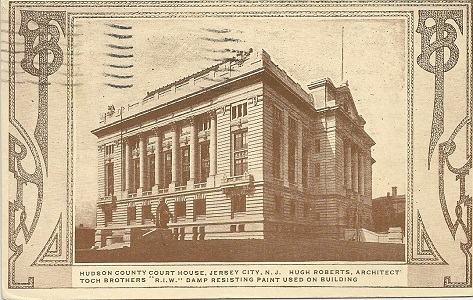 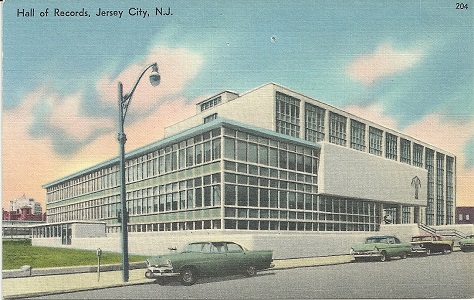 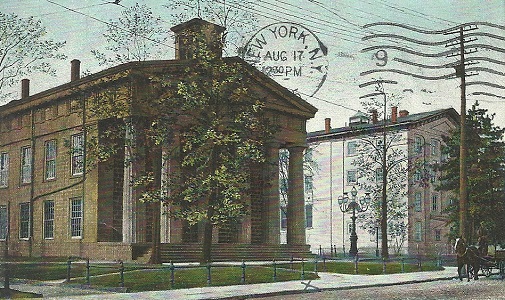 Hudson County's landmark courthouse was built during the time of the American Renaissance (1876-1917) and opened on September 20, 1910.  It replaced the original Hudson County Courthouse built in 1845 on the adjacent property. The "new" courthouse was designed by architect Hugh Roberts (1867-1928), a resident of Jersey City.  He was the brother-in-law of Hudson County attorney William D. Edwards and US Senator and New Jersey Governor Edward I. Edwards. The companies of Well Bros. and John F. Gill & Sons completed the courthouse for $3.3 million, well over the projected budget of $990,000.

Roberts' goal for the structure was to fulfill his commission from the county freeholders to design a grand beaux-arts building similar to the nearby Essex County Courthouse by architect Cass Gilbert. He looked to combine classical style and aspects of American history that reflected the founding of Jersey City.  Reminiscent of Italian Renaissance palaces, the six-story exterior (183' x 134') features massive granite walls, marble flooring, bronze window frames, and doors, Corinthian columns, and a low copper dome with the torch of victory.

The four-story interior design and ornamentation received as much attention as the exterior.  Eight columns of Italian green marble in the center of the building dramatically rise from the second to the fourth floor. It forms an interior court covered by a dome. Scenes of the zodiac surround the rotunda with a dome of stained class. Architectural historian Suzanne Hand remarks that the structure's great rotunda "with its rich materials, columns, balustrades, arches and dome shows the sumptuousness of Neoclassical Revival design" (79).

Roberts, who admired the paintings at the Essex County Courthouse, selected Francis Davis Millet to become the director of decoration, the same role he had for the 1893 World's Columbian Exposition in Chicago. He then commissioned four additional artists who worked at the Newark courthouse:  Edwin H. Blashfield, Charles Yardley Turner, Kenyon Cox, and Howard Pyle. Their murals grace the interior of the building. They depict the history of Hudson County, such as The Coming of the English by Pyle seen in the Hudson County Freeholders' Assembly Chamber. The four major courtrooms on the top floor are each designed in a classical style conveying the majesty of the law.

The Hudson County Hall of Records and Administration Building (595 Newark Avenue) in the International Style of architecture opened nearby in 1953 and was enlarged ten years later. In 1966, the "old courthouse" closed, and plans were made for its demolition. However, in the mid-1970s, citizens and artists waged a successful campaign to save the courthouse that resulted in the restoration of the building. It reopened in 1985 for use in civil cases. The restoration program received a preservation award from the Victorian Society of America in 1988. The following year, the Offices of the Hudson County Executive returned to the first floor of the historic building. In 2007, the rotunda was named for Theodore Conrad who spearheaded the preservation and restoration of the courthouse.

In 1989, the Hudson County Board of Chosen Freeholders renamed the building for William J. Brennan, Jr. He was born to Irish immigrant parents in Newark on April 25, 1906, and graduated from Barringer High School, the University of Pennsylvania, and Harvard Law School in 1931. He served in World War II as an army attorney and as Hudson's County's assignment judge from 1949 to 1951.

In 1848, Justice Brennan was nominated by Governor Alfred E. Driscoll to a judgeship on the New Jersey Superior Court., and in1952 succeeded to the Appellate Division of the Superior Court. In 1956, President Dwight D. Eisenhower nominated Brennan as an Associate Justice to the US Supreme Court where he served until 1990. Justice Brennan's tenure on the court is recognized for his opinions in many landmark cases such as Baker v. Carr and The New York Times v. Sullivan. He died in Washington, DC on July 24, 1997.  In 2001, New York University School of Law opened the Brennan Center for Justice for the former associate justice. He was inducted into the New Jersey Hall of Fame in 2010.

In 2019, the County and Jersey City announced plans to renovate the landmark courthouse, raze the Hudson County Administration Building, and develop a civic district named the Honorable Frank J. Guarini Justice Complex. Former U.S. Congressman donated a parcel of land for the complex  It will be bounded by Newark Avenue, Oakland Avenue, Route 139, and a two-way extension of Central Avenue between Hoboken and Central Avenues. A judicial complex of courtrooms and county offices and a three-acre public park for Journal Square will occupy the area.

The Hudson County Office of Cultural Affairs and Tourism created a special video entitled “A Link to the Past: A Vision of the Future: The Hudson County Justice William J. Brennan Court House” in honor of the centennial of the construction of the 1910 courthouse.