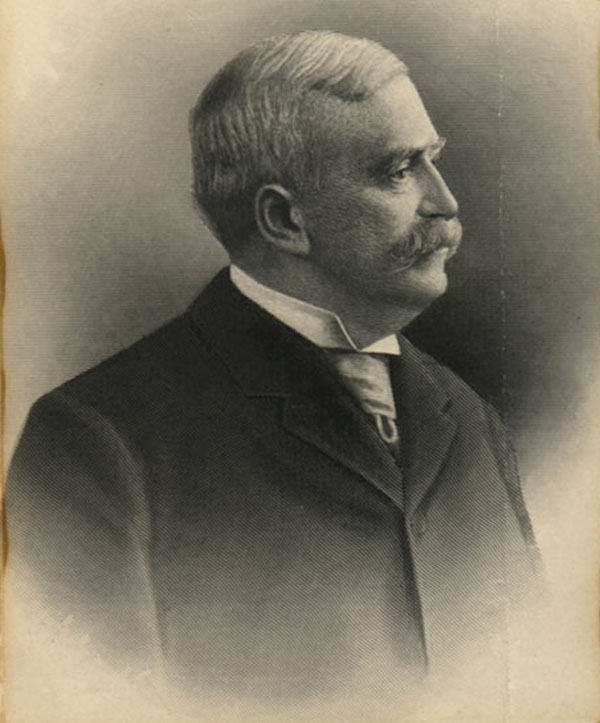 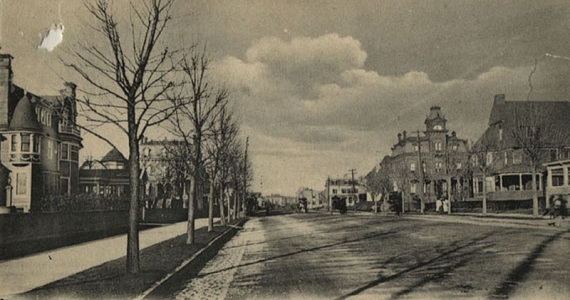 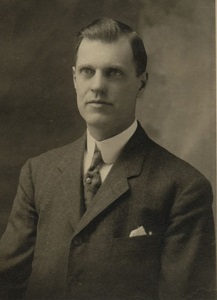 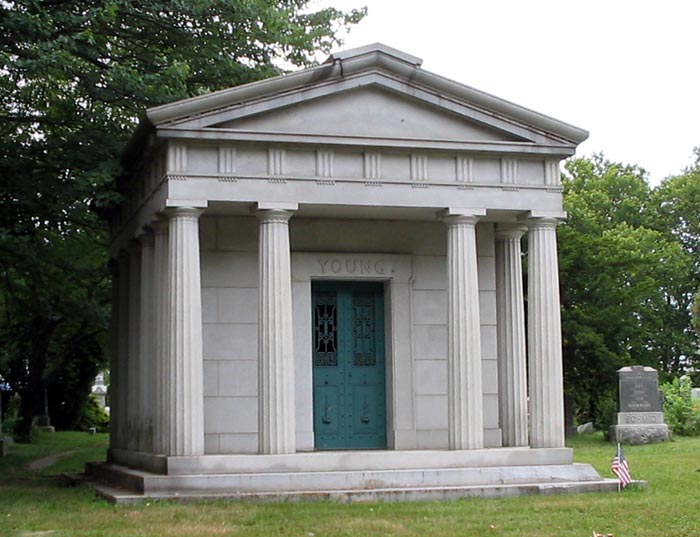 Edward F.C. Young was Jersey City's wealthiest resident, preeminent financial leader, and most influential political power broker at the end of the nineteenth century. He has been called the "father of Jersey City business" and was considered one of New Jersey's most powerful figures in banking and manufacturing.

Young was born on January 25, 1835, in Malapardis, Morris County, NJ., The son of Benjamin F. and Eliza D.Young, he was the descendant of the English minister John Young, who moved from New Haven, CT, to found a settlement at Southold, Long Island, NY, in 1640.

After the death of his father, Young moved with his family to Jersey City. He was nine years of age at the time and attended Public School No.1 at York Street. At age seventeen, he was employed as a clerk by the Hudson County National Bank and became a teller. After he joined the Mechanics' and Traders' Bank at One Exchange Place, it was reorganized as the First National Bank of Jersey City in 1865. From working as an assistant cashier, Young advanced to be elected bank president in 1879, a position that contributed to his larger business and political roles in Jersey City.

During his prolific career, Young was associated with approximately thirty institutions. He was president and director of the Dixon Crucible Company and the North Jersey Land Company and an officer of the Hudson County Bank, the Merchants' and Traders' Bank, the Liberty National Bank, the New Jersey Title Guarantee and Trust Company, and the Pavonia Trust Company of Jersey City. Young served on the boards of directors for several companies:  the Bankers Trust Company of New York, the Bayonne Trust Co., the Bergen & Lafayette Trust Company of Jersey City, the Hudson and Manhattan Railroad Company, the Hudson Gas Company, the Liberty National Bank of New York, and the New York & New Jersey Railroad Company. Among the other corporations with which he served were the American Graphite Company, the Cleveland Steel Company, the Colonial Life Insurance Corporation of America, the People's Light and Power Company, the Port Richmond and Bergen Point Ferry Company, and the Produce Exchange Trust Company. Young was also the partner with S.D. Mackey in the firm of Mackey, Young & Co., a Jersey City coal company.

The breadth of Young’s business, however, did not remove him from Jersey City. He managed all his financial affairs from his office in the First National Bank in Jersey City. Young considered Jersey City to be his home and did not wish to leave the city responsible for his financial success.

Young partnered his management skills with "Little Bob" Davis, the local Democratic Party boss of Hudson County. That established what historian Thomas Fleming called "an unsavory alliance" in the control of Jersey City politics (149-150). "With Davis’s help, Young made sure that the Public Service and other corporations got what they wanted—minimum taxes, perpetual franchises, and indifference from the city and county government on such sticky matters as plant safety and right to organize unions" (150). According to Lincoln Steffens in his political commentary Upbuilders ". . . Davis was the Democratic boss, politically speaking, but . . . Young . . . was the business boss who, backing Davis, was the real power" (11).

A major business enterprise founded by Young was the Public Service Corporation. It began with Young's involvement with Charles B. Thurston in the Jersey City and Bergen Street Railway Company, a horse car company in Jersey. The company, reorganized as the Consolidated Traction Company in 1893, was a trolley car operation, and Young became its president. The company was then leased to the North Jersey Street Railway Company, which operated street railways in Jersey City, Newark, Elizabeth, and elsewhere in North Jersey. Under Young's presidency, these railway lines were brought into the Public Service Corporation of New Jersey, founded in 1896. After its incorporation in 1903, Young left the presidency and served on the original board of directors of the corporation. It became the Public Service Transportation Corporation in 1924 when it developed bus lines to replace the trolley service.

The financial reorganization of the Dixon Crucible Company is considered one of Young's most significant business achievements. He was named receiver of the company in 1883, restored it to profitability, and became its president. The company’s bankruptcy occurred under its president Orestes Cleveland, who used corporate funds to campaign unsuccessfully for governor of New Jersey in 1880. Cleveland (1829-1896) was the son-in-law of the company's founder Joseph Dixon and became its president in 1858. Cleveland entered Jersey City politics in the 1860s, serving on the Board of Alderman (1861 and 1862 as president) and in the US House of Representatives (1869-1871). He was elected mayor in 1864 and again in 1886 with the help of Bob Davis.

Young's economic stature advanced him to local politics on the Democratic ticket. He was elected City Treasurer of Jersey City (1865-1870) and Jersey City alderman (1872-1873). In 1874, Young was elected to the Hudson County Board of Chosen Freeholders (now Commissioners) and in 1876 became its first director-at-large. He was a member of the Democratic State Committee for several years. In 1887, he was appointed to the Tax Adjustment Commission and two years later New Jersey Railroad Director for a four-year term.

In 1892, Young unsuccessfully sought the Democratic nomination for governor with the support of the Hudson County Democratic Party delegation at the convention in Trenton. However, his candidacy was upset by the nomination of Supreme Court Justice George T. Werts for the post placed by Hudson County prosecutor Charles H. Winfield.

Winfield had failed to be elected as a member of the Hudson County delegation to the convention but attended by proxy for an absentee delegate. Werts, a former state senator whose election Young had opposed, had moved to Jersey City from Morristown. He lived in a mansion on Crescent Avenue, the present site of Lincoln High School. Werts was elected New Jersey governor (1893-1896). Political pundits hold that ex-United States Senator James Smith, New Jersey Governor Leon Abbett, and Congressman Allan L. McDermott orchestrated Young's defeat.

According to local historian, J. Owen Grundy, "it was no secret that "boss" Bob Davis . . . took his orders from E.F.C. Young. So powerful had he become that he forced Davis to name his son-in-law George T. Smith as Democratic nominee for Mayor in 1901" (Typescript 3). Davis reportedly did not reveal the first name of the "Smith" candidate for mayor, which led some to believe that Robert Smith, a former army colonel, was running for the office. The deception caused Democrats and Republicans to vote for the Republican candidate Mark Fagan in the local election.

The career of the future New Jersey Governor Edward I. Edwards (1920-1923), originally from the Lafayette section of Jersey City, began under Young's tutelage. Young took notice of Edwards when he was working as a clerk for the First National Bank. He eventually became its president. With Young's support, Edwards followed his mentor into the Democratic Party. Edwards became State Comptroller under New Jersey Governor Woodrow Wilson and was elected a state senator from Hudson County. He had a mansion at 37 Duncan Avenue.

He was also noted for his philanthropy. One of the founders of the Children's Home at Glenwood Avenue, Young contributed $25,000 towards the building fund of the Emory M.E. Church (now Metropolitan A.M.E. Zion Church) at Bergen and Belmont Avenues. He later purchased a $6500 pipe organ for the congregation. He also donated $1000 for a church bell to All Saints' R.C. Church (now Cornerstone Church of Christ) at Pacific and Communipaw Avenues. Young attended services at St. John's Episcopal Church at Summit and Gardner Avenues, where he was a twenty-five-year member of the vestry.

Young's estate began at the corner of Hudson (now Kennedy) Boulevard and Glenwood Avenue, where his mansion was located, extended towards Westside Avenue. It is now the site of Saint Peter's University. His son Edward L. Young and his daughter Hattie Louise (Mrs. George T.) Smith lived in mansions nearby on the city block from Glenwood to Montgomery Avenues. A coach house, with residence above for the coachman, faced Glenwood Avenue.

Young died at his home on December 6, 1908. He is buried in the family mausoleum in Bayview Cemetery on Garfield Avenue. The marble altar and pulpit at St. John's were inscribed as memorials to Young, and a bronze tablet to Young was placed at One Exchange Place. The Evening Journal commented on Young's consummate involvement with business and politics in Jersey City: "It was his city, his life, his scope, his being and nothing that affected it was a matter of indifference to him" (December 8, 1908).