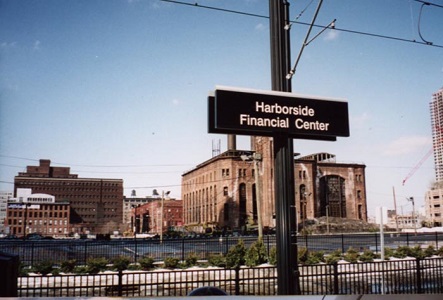 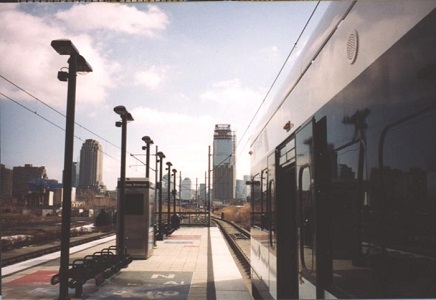 In April 2000, the Hudson-Bergen Light Rail of NJ Transit opened the first segment of its passenger service starting from Bayonne through Jersey City. When the 20.5-mile railway service is completed, it will make its way to the Vince Lombardi Park-Ride in Bergen County. The Light Rail project began during the administration of Governor Thomas Kean in the late 1980s.

On the western spur of the Light Rail, the Jersey City Medical Center is reached from the Garfield Avenue station. The campus of New Jersey City University is a short distance from the West Side Avenue station. The Light Rail will evenually extend westward toward the Hackensack River to accommodate the 8,000-unit Bayfront development planned between the river and Route 440.

Art Along the Rails

N.J. Transit incorporated original artworks in the design of several of the stations. It obtained a federal grant of $2.5 million for the project. Ana M. Alaya of the Star-Ledger comments, "In displaying artwork in stations along its new line, . . . NJ Transit is upholding a tradition of displaying major artworks at transit hubs that is firmly established in places from Mexico City to Paris to Moscow." In Jersey City, four stations display artworks reflective of the history and culture of the city and its environs:

The tribute to Dr. King is fitting. He visited Jersey City twice within the three years before his assassination on April 4, 1968. On September 22, 1965, Dr. King received an honorary degree of Doctor of Laws and Letters from Saint Peter's College (now Saint Peter's University). He had received the Nobel Peace Prize the previous year. On March 27, 1968, Dr. King visited the Metropolitan A.M.E. Zion Church (northeast corner of Bergen and Belmont avenues). Over 2000 individuals tried to find a seat in the church with a capacity for only 1,000 to hear his ten-minute speech. He urged his audience to participate in the "Poor People's Campaign" on April 22 in Washington, DC, that he himself never lived to see. The former Jackson Avenue and Public School No. 11 (Dr. Martin Luther King, Jr. School) on Bergen Avenue are also named for the slain civil rights leader.