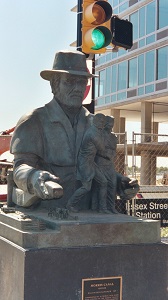 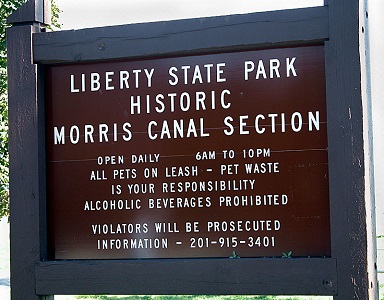 The area surrounding the old Morris Canal basin in Paulus Hook has been incorporated into Liberty State Park.
Photo: A. Selvaggio, 2002

Little Basin of the Morris Canal at Paulus Hook
Photo: A. Selvaggio, 2002 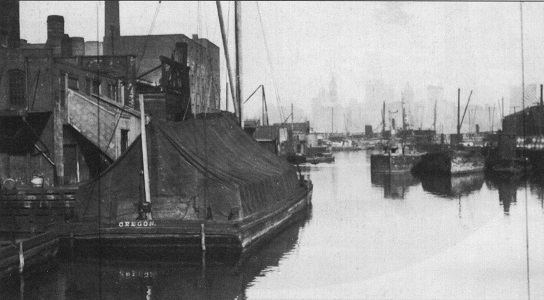 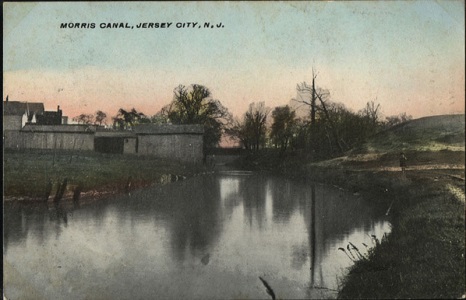 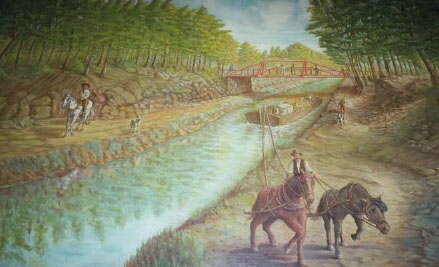 Mural of a scene along the old Morris Canal in Jersey City by Charles Renzulli (1967). Formerly on display in the Greenville Branch of the Provident Bank, it was donated to the Hudson County Community College Foundation in 2015. It is permanent display in the newly constructed Gabert Library at Hudson County Community College's Journal Square campus. 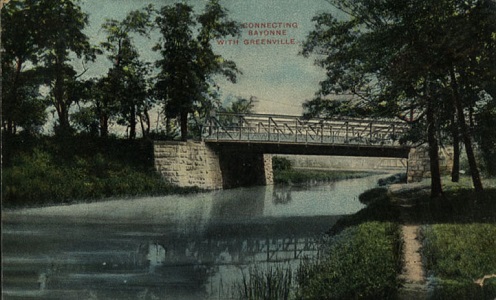 The extension of the Morris Canal into Jersey City at Little Basin from Newark was completed in 1836. As the canal's eastern terminus, it linked Jersey City to the anthracite coal, or "black gold" fields, of northeastern Pennsylvania that arrived on flat-bottomed boats for the city's industrial development.

The canal extension advanced canal trade and manufacturing. Jersey City's prime location on the Hudson River offered an available ferry service to carry coal across to New York City. Jersey City also benefited from the warehouse and freight yard industry required for the transshipment of goods across the river. The Irish immigrants in the city worked on the docks, many as day laborers for very little money.

The Morris Canal was designed by Morristown engineer George P. MacCulloch. It originally ran ninety miles from Phillipsburg on the Delaware River to Newark when completed in 1831. It traveled into Jersey City from a ravine at Newark Bay near present-day Route 440.  It then cut between Mercer Park and Currie's Woods and went on to New York Bay at 52nd Street, Bayonne, for a total of over 109 miles.

In Jersey City, a dry channel, forty feet wide, was dug from the Hackensack River to the Canal, or Little Basin. Lock gates at the end of the canal allowed water to pass through the canal with the assistance of a pumping station near the Hackensack River. Barges ". . . passed under the Bergen Road bridge and across Bergen Neck [Bayonne] almost to New York Bay. There it [the canal] rounded a very sharp bend known as 'Fiddler's Elbow' and headed northward for the [Morris] Basin in Jersey City" (Robinson, n.p.).

With railroad development in the northeast, the use of the Morris Canal declined. It had reached its peak after the Civil War, carrying 900,000 tons of coal. The canal route that took five days for delivery was overtaken by the shortened railroad time of only eight hours. The Jersey City extension of the canal on the Hudson River waterfront remained the only viable part of the canal after 1871. That year, the Lehigh Valley Railroad leased the Morris Canal to eliminate competition. In 1922, New Jersey took over the canal, except in Philipsburg and Jersey City, and drained it in 1924.

In 2013, the New Jersey Transportation Planning Authority proposed the Jersey City: Morris Canal Greenway Plan to design a recreational pathway for pedestrians and bicyclists along the former route of the old Morris Canal.