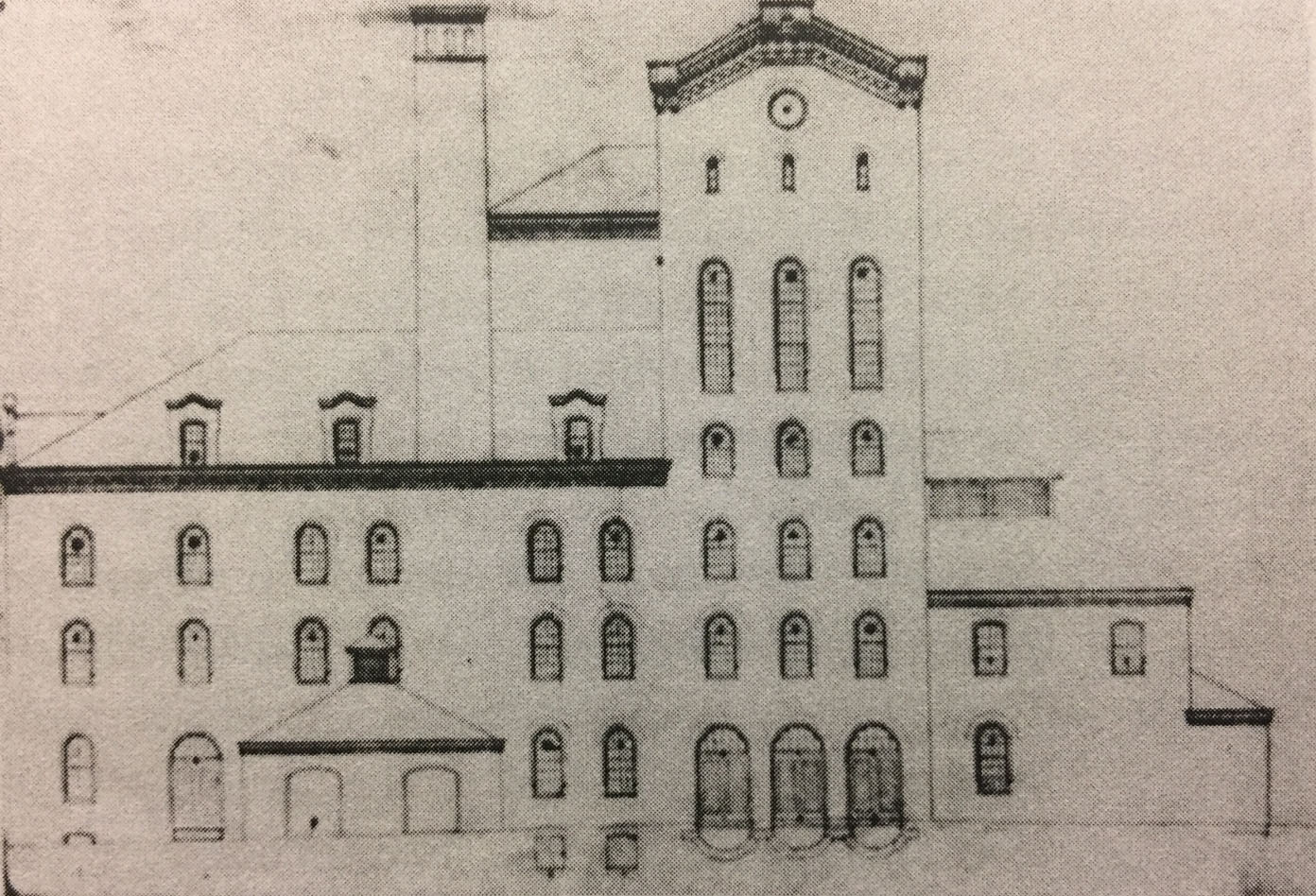 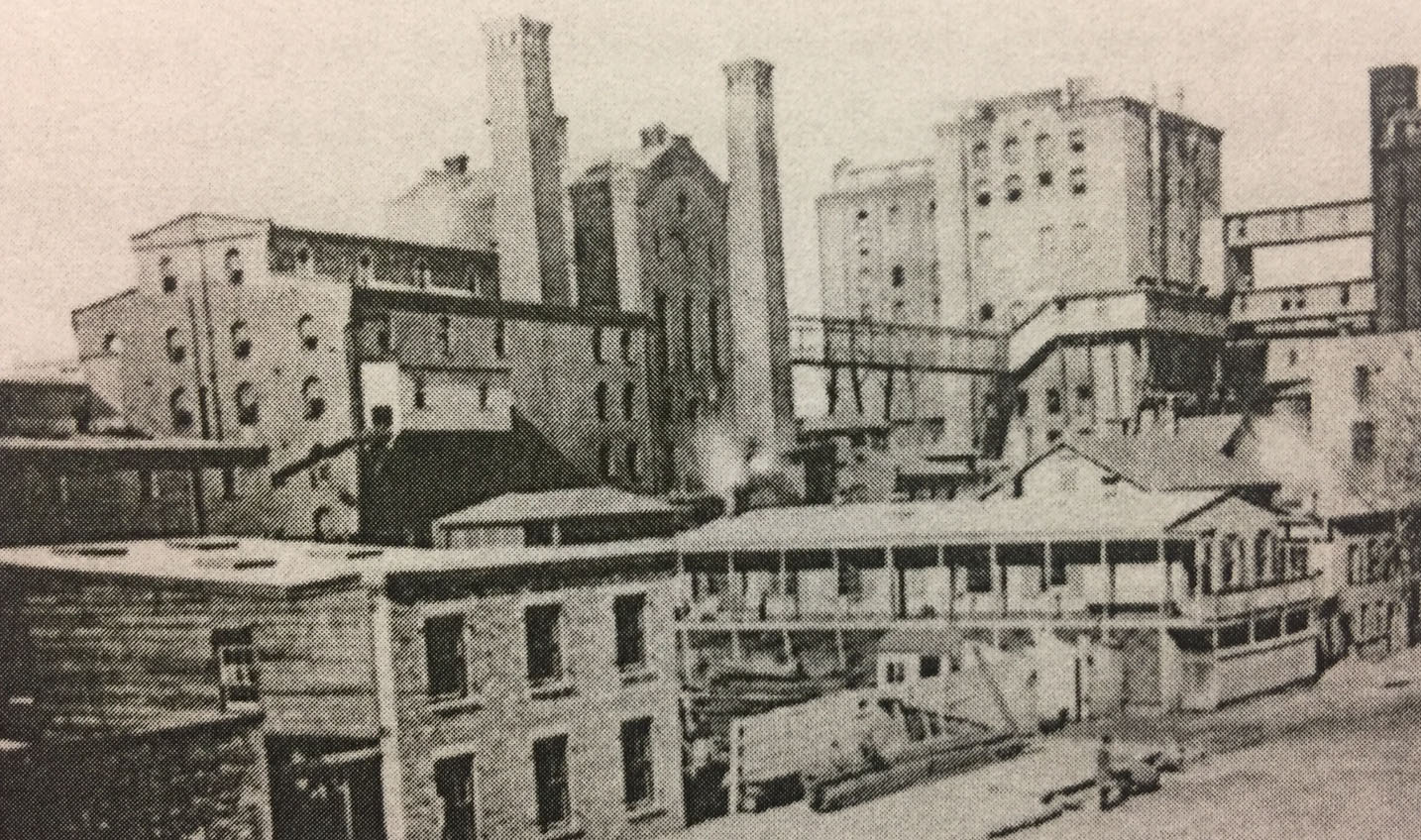 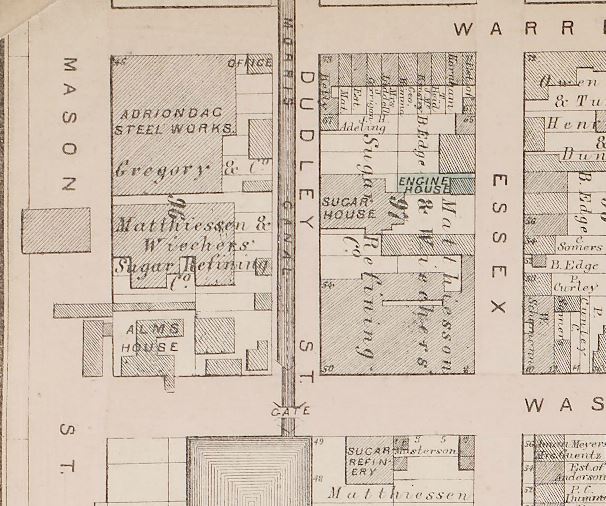 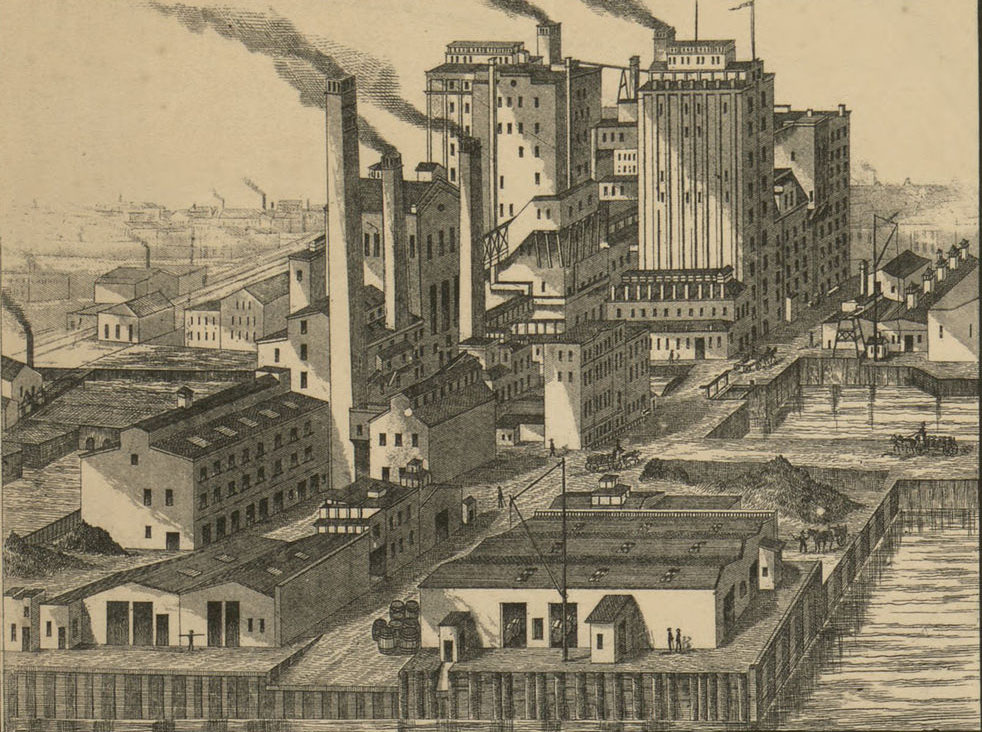 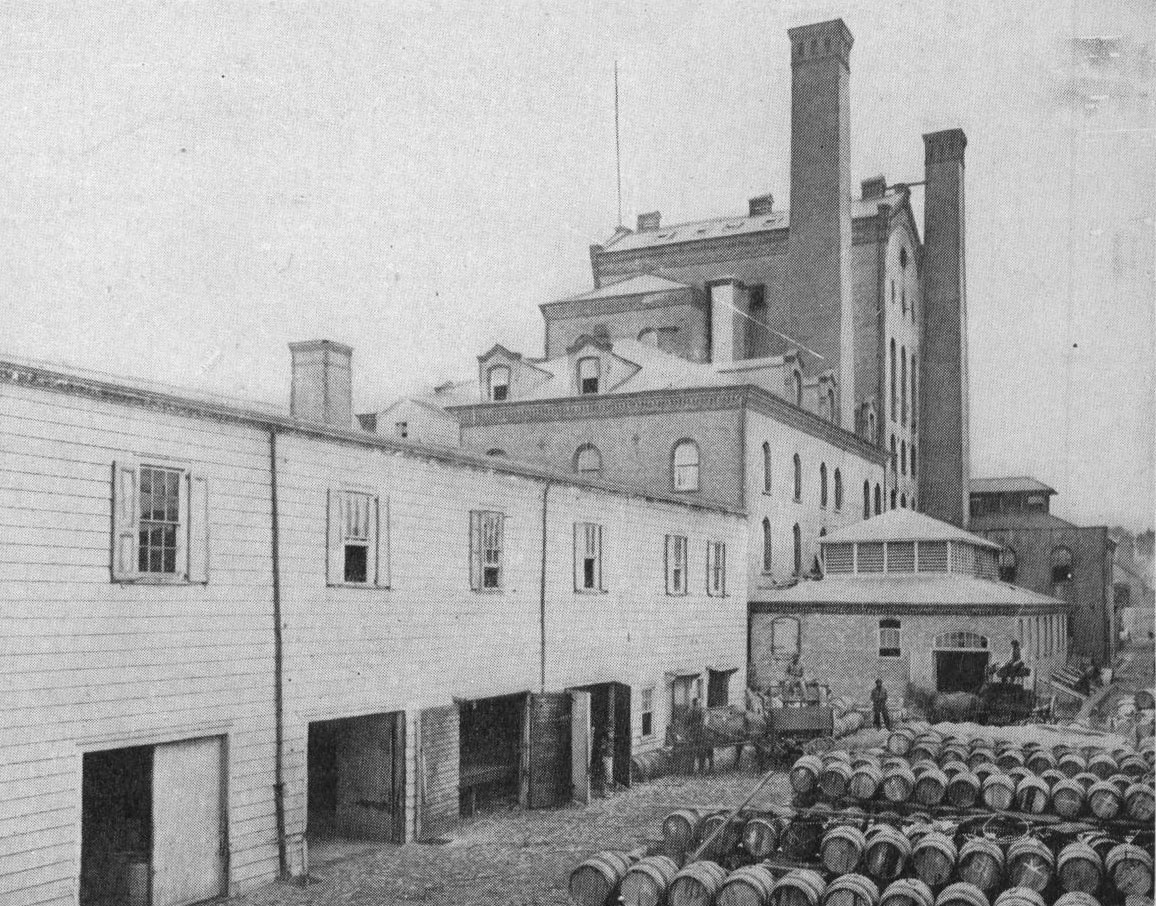 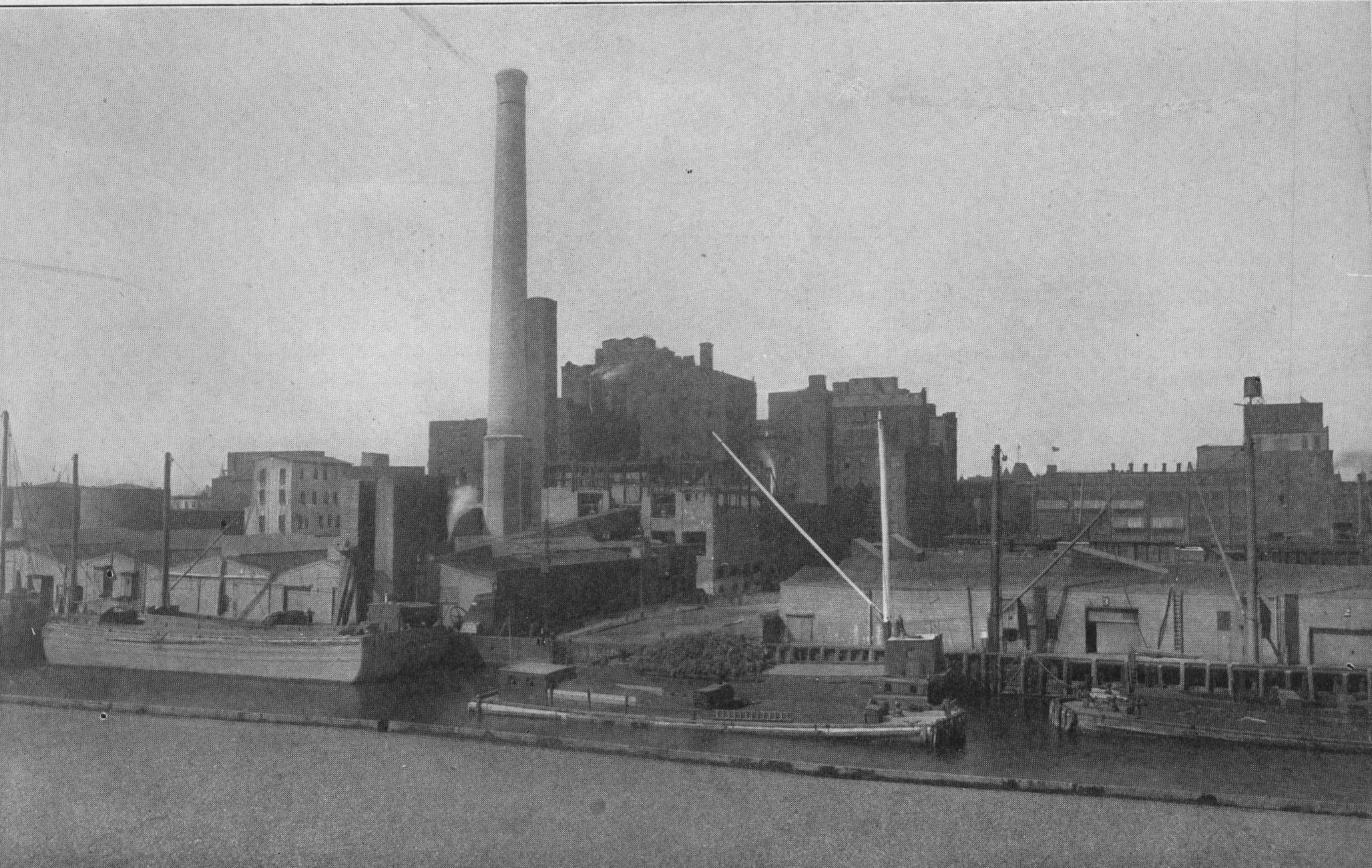 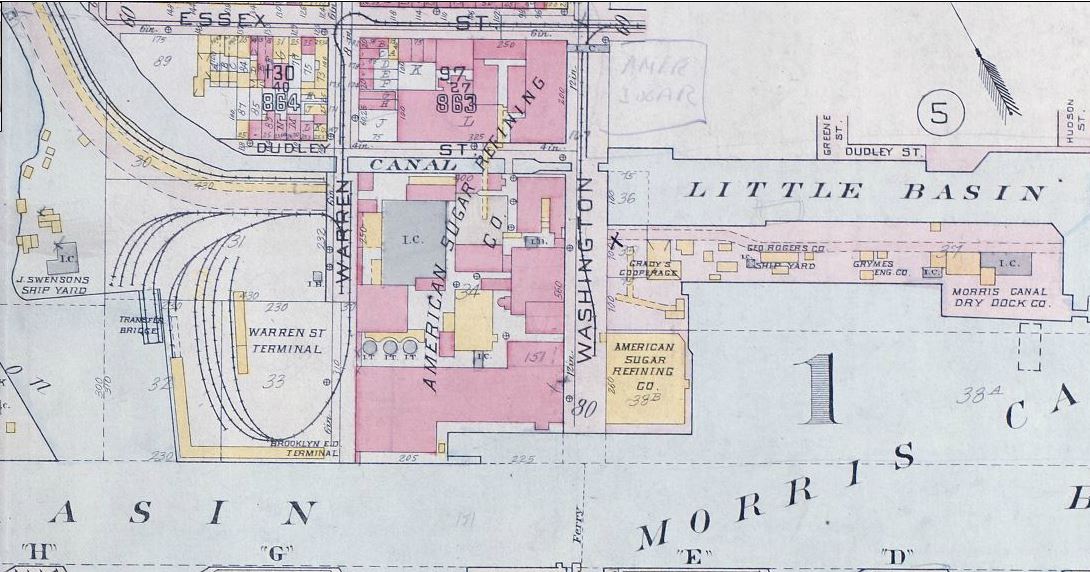 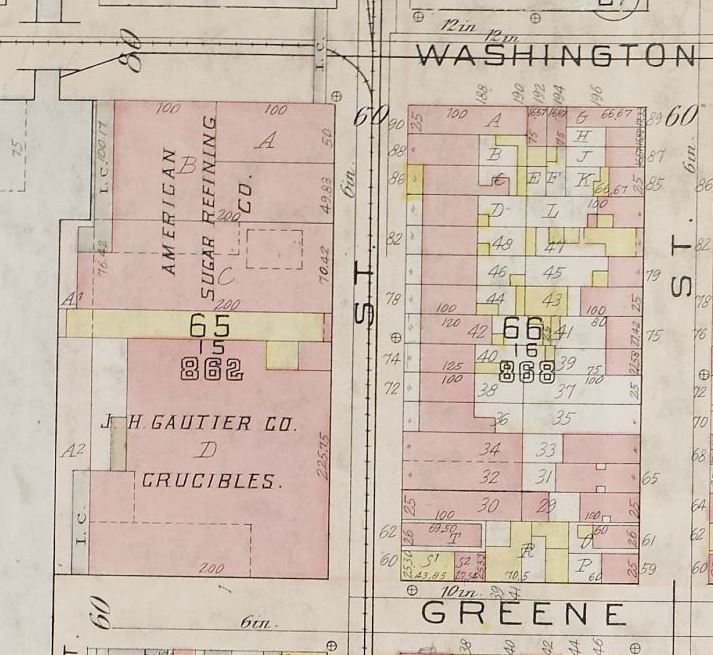 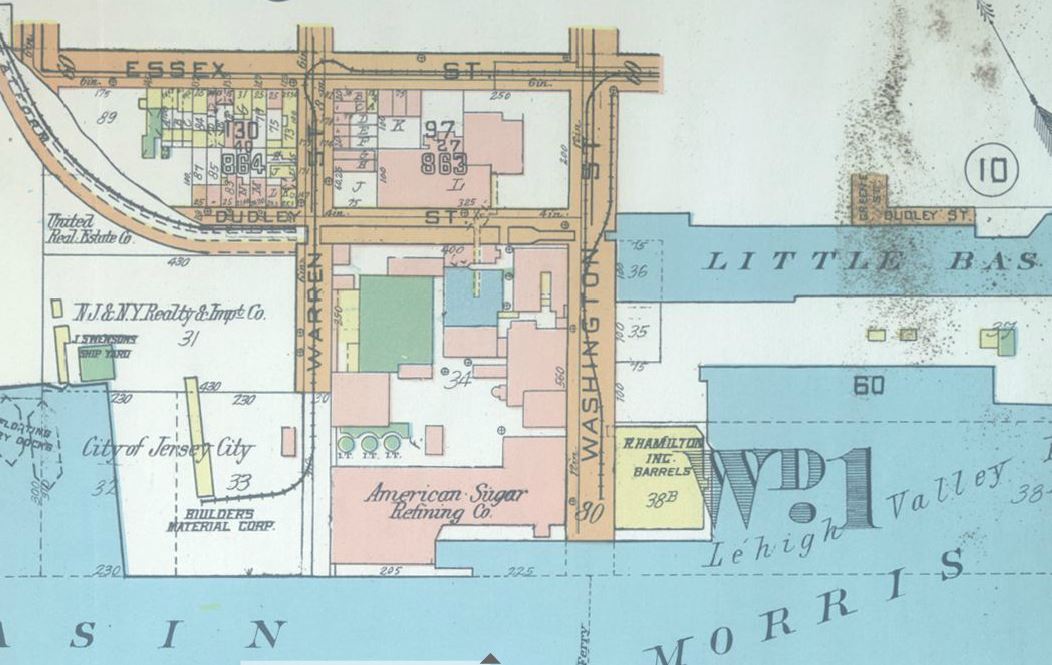 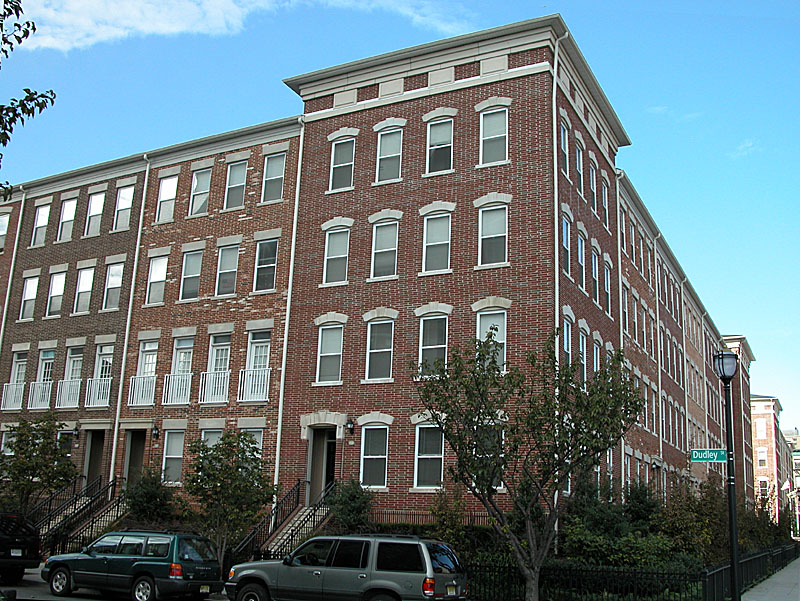 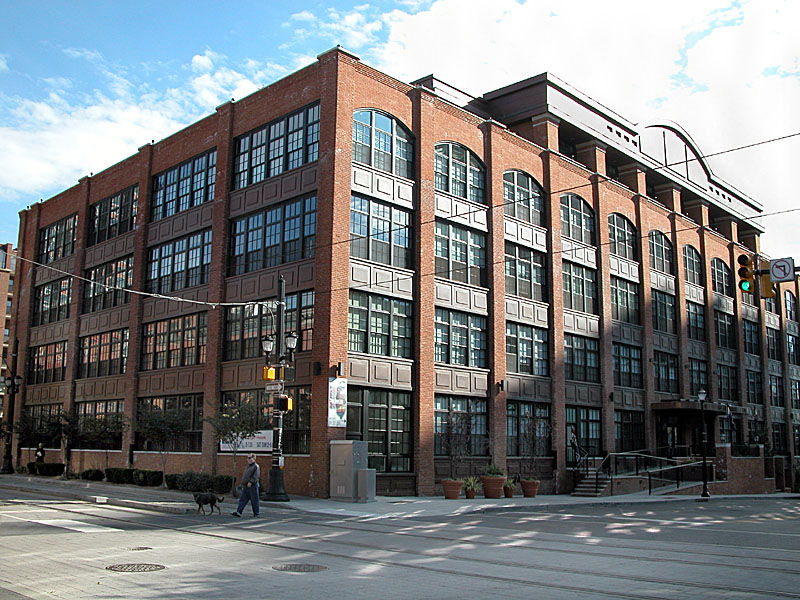 The Sugar House Lofts condominium now occupies the site of the once extensive complex of the American Sugar Refining Company, built ca.1907. It serves as a reminder of Jersey City’s once important sugar refining industry. Located on the east side of Washington Street at Essex Street, the business dominated the industrial waterfront at the Morris Canal basin in Paulus Hook from the late-nineteenth century through the 1920s.

The Sugar House Lofts opened in June 2001 as a 64-unit luxury condominium building. Colgate-Palmolive owned the property from 1942 and sold it to developers during the late 1990s. Rather than demolish the original four-story brick-and-steel industrial warehouse building (ca. 1900) for new high-rise construction, the developers and architects redesigned and renovated the building to blend in with the historic character of the Paulus Hook neighborhood. The renovation's design preserves important design elements like large arched windows and high ceilings.

The first refinery for the company was designed by Danish-born architect Detlef Lienau (1818-1887) in 1863 between Washington and Warren Streets. The company quickly implemented technological innovations in sugar refining like centrifugal processing. By 1875, Matthiessen & Weichers expanded north of the Morris Canal. It built a seven-story office and warehouse on the site of the old Jersey Glass Works factory at the southwest corner of Washington and Essex Streets. In 1892, the American Pottery Company buildings, on Warren Street between Essex and Morris Streets, were demolished for the refinery's expansion.

In its heyday, local operations employed over 1500 workers and occupied four city blocks with an expanse of over 900 feet of waterfront to receive transport ships. During this time of industrial expansion, the company was noted both for the quality of its product and for its progressive views on the redesign of production equipment in its own machine shops to remain a leader in its industry. Jersey City refineries were daily producing a variety of over 5,000 barrels of 360 pounds each of refined sugar from raw sugar imported worldwide (Muirhead, 1910).

The American sugar market reached a saturation point by the end of the nineteenth century. Recurring oversupply and declining prices led larger refineries to attempt to reduce competition to revive profitability. By 1891, under the leadership of the Havemeyer family of Brooklyn, NY, several refining plants, including Matthiessen & Weichers Co., were consolidated under the corporate ownership of the American Sugar Refining Company. The incorporation papers were filed in New Jersey to avoid New York’s stricter regulations that had earlier thwarted the Havemeyers of Brooklyn. Matthiessen relinquished direct control of his Jersey City refineries but maintained considerable influence as a Director and Treasurer of the new organization. Often referred to as the "Sugar Trust," the industry remained a frequent target of anti-monopoly government lawsuits from its inception through the 1920s.

An art collector and enthusiast, Matthiessen officially retired from the American Sugar Refining Company in January 1900 to pursue travel in Europe. However, he died not long afterward and is buried in Woodlawn Cemetery in the Bronx, NY. At the time of his death, his estate was valued at approximately 15 million dollars.

On November 14, 1924, a four-alarm fire at the Battelle and Renwick Saltpeter Co. on Morris and Warren Streets spread to the refinery across the street. Saltpeter (sodium nitrate) used in the making of explosives is highly inflammable. The fire caused the evacuation of nine hundred residents, mostly immigrants, living in nearby wooden tenements in Paulus Hook.  News reports claim that the daytime conflagration, starting at nine a.m., enabled firefighters to bring the injured to safety. There were no fatalities.

The fire gutted most of the refinery buildings. They had been shut down by the company three years earlier when operations were moved to Baltimore, MD. The rapid-spreading fire, explosive noises, and shattering of windowpanes reminded some Jersey City residents of the Black Tom Explosion, eight years earlier. Thickening smoke and sparks carried by heavy winds affected the surrounding homes. Firemen, incapable of reaching the fire, could only water adjacent properties as a preventative measure. Fireboats used the access of the Morris Canal Basin at the foot of Washington Street to protect the piers and properties south of the fire.

Fire officials claimed the overheating of the machinery in the manufacture of the saltpeter to be the cause of the fire. Company officials, however, held that a bonfire set next to the building caused sparks to ignite a fire in the basement. The fire that raged for four hours destroyed thirty-seven tenement houses and several large factories with total property damage amounting to approximately one million dollars. Part of the complex was saved by the dynamiting of "an overhead passageway connecting the soap plant and the sugar house to halt the flames" (Jersey Journal 18 December 1964).

After the fire, the only building on the block to remain intact was a small "fireproof" building that was constructed in 1923 for Onyx Chemical Co., next to the saltpeter plant. Onyx Chemical would grow to occupy much of the area destroyed by the fire. In the late 1990s, Onyx left Jersey City, selling the land for residential redevelopment. Today, the townhomes and luxury apartments of The Windsor at Liberty House complex line the formerly industrial streets.

A segment of the Hudson River Waterfront Walkway was opened alongside the southern edge of the property. It provides public access to the adjacent Morris Canal Basin and the northern edge of Liberty State Park.