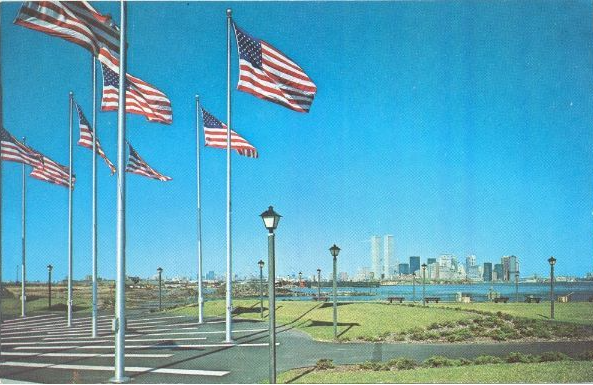 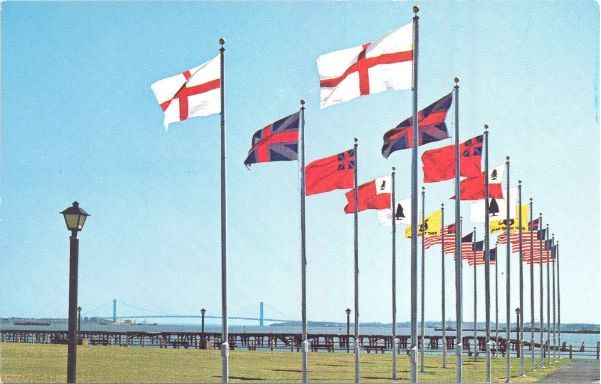 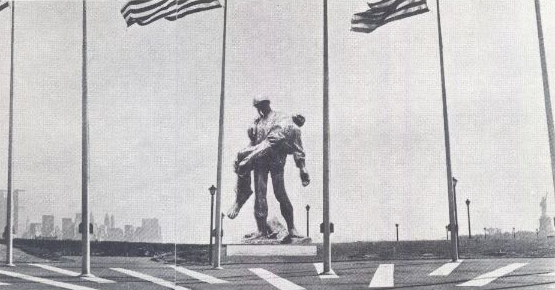 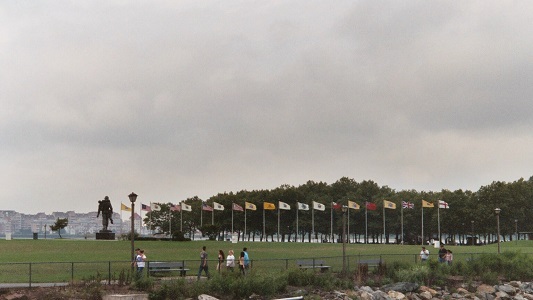 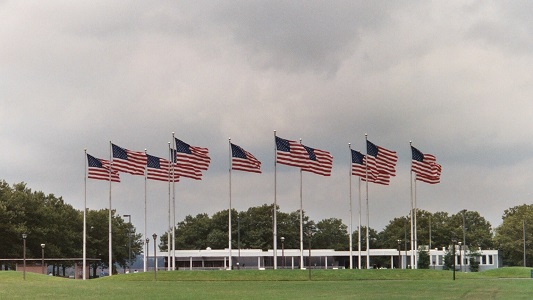 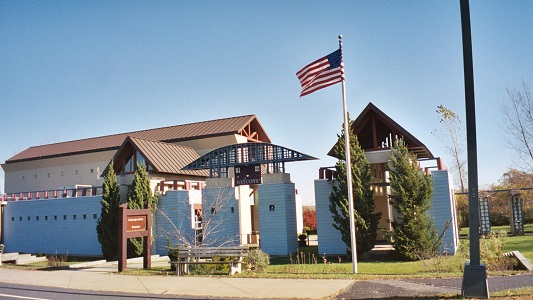 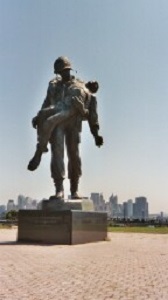 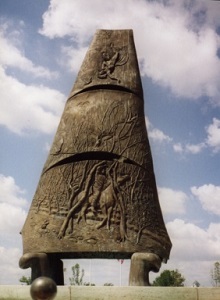 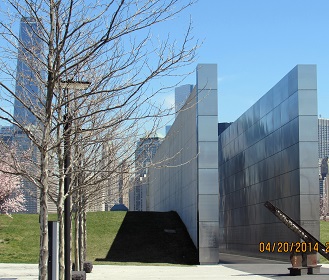 Opened on Flag Day, June 14, 1976, Liberty State Park is the largest urban park in New Jersey and receives some 5.1 million visitors annually.  II has more than 1,200 acres of approximately 300 acres of developed space for active and passive recreation, including the two-mile Liberty Walk along the Hudson River waterfront.

The western edge of Liberty State Park was once the waterfront home of the Lenape, New Jersey's Native Americans. During the Colonial Era, in 1661, Dutch settlers of New Netherland ran a ferry service on the waterfront to Manhattan. The northern edge follows the path of the nineteenth-century Morris Canal. Its barges carried coal from Pennsylvania to the expanding industrial and urban markets at New York Bay. In the mid-nineteenth century, the railroads filled in the eastern edge of the park. Waterfront tidal flats were transformed into expanses of railroad yards and passenger and cargo transportation facilities.

At the north end, the Central Railroad of New Jersey (CRRNJ) operated the terminal complex from 1849 to 1967. The present terminal, completed in 1889, received the stream of immigrants entering America from Ellis Island off Jersey City's coast. The new arrivals once examined and proven "clearly and beyond a doubt entitled to land," more than fifty percent, boarded barges for the mainland at the CRRNJ terminal. Thousands of workers and travelers also boarded the ferries or trains daily at the terminal for parts elsewhere. In 1967, the decline of railways nationally brought the bankruptcy of the Central Railroad and the close of the terminal. It gradually fell into disrepair with an uncertain future.

Some residents, believing the site had potential as a public natural resource, sought support from the state and federal governments to transform it into a waterfront park. In 1958, community activist and former City Councilman Morris Pesin began a public awareness movement about the site's proximity to Liberty Island. With a reporter from the Jersey Journal, Pesin canoed between the two locations, a journey of only eight minutes.

Other early advocates for the preservation of the site for a park were Audrey Zapp and Ted Conrad. Backed by community support, they succeeded in obtaining Green Acres Bond Funds and Land and Water Conservation funds. Jersey City donated 156 acres for park grounds. The Department of Environmental Protection and the US Army Corps of Engineers joined the project to clear the harbor. In 1976, the National Park Service undertook the restoration of the terminal and waterfront property. The firm of Geddes Brecher Qualls Cunningham drew up the architectural plans for the park.

As one enters the park on Morris Pesin Drive, the flags of the fifty states are assembled by their admission to the union. Flag Plaza in front of the Park Administration Building and Visitors' Center has thirteen American flags for each of the original states of the union. To the right are flags that were flown during the Revolutionary War era. Nearby, at the southern end of the park, is a plaque commemorating the Black Tom explosion of 1916.

An imposing Holocaust memorial statue stands before the flag plaza in the South Overlook t Field. Dedicated on May 30, 1985, the twenty-foot, two-ton bronze, cast at the Tallix foundry in Peekskill, NY, rests on a black marble base. Named Liberation Monument by sculptor Nathan (Natan) Rapoport (1911-1987), the statue depicts a World War II concentration camp survivor carried to freedom by an unarmed American soldier. Its placement opposite the Statue of Liberty and Ellis Island forms a triad of symbolism for liberty and freedom. Born in Warsaw, Poland, Rapoport is known for his Holocaust-related monuments, including Monument to the Warsaw Ghetto Uprising, erected in Warsaw in 1948.

La Vela di Colombo, or "The Sail of Columbus," Monument at North Cove is at the center of the circular Christopher Columbus Plaza.  Designed by Italian sculptor Gino Gianetti, the two-story sail-shaped bronze monument commemorates the 500th anniversary of the journey of Christopher Columbus to America in 1492. It is within the view of the Statue of Liberty and Ellis Island--symbols of the nation's foremost gateway to America.

In 1998, The National Italian-American Foundation and the Christopher Columbus Citizens Foundation dedicated the sculpture from the Italian government and the City of Genoa. The architect for the project was John Maiorano of the RBA Group. "The Sail of Columbus" is atop four bronze mooring posts mounted on a stone base in the shape of a ship. The waterfront side of the sail depicts scenes of the explorer's travels. The inland side includes a scene with Columbus at the helm of his ship.

The Environmental Educational Center, now the LSP Nature Center, was designed by Princeton architect Michael Graves. It opened in 1982 at the park's thirty-six-acre natural area--a tidal marsh of the Hudson River estuary--at 275 Freedom Way. It has a prominent view of the Statue of Liberty, Ellis Island, and the southern end of Manhattan Island. The post-modern-style two-story stucco-glazed timber building originally featured a colonnaded entrance that joined two pavilions designed to integrate their interior with the unique external landscape.  According to New Jersey journalist Gordon Bishop, the center "resembles a Roman cathedral with a natural beauty" and "was inspired by the Madonna de Villa in Italy" (Bishop 13).

The devastating floodwaters of Hurricane Sandy in 2012 all but destroyed the interior of the center. The building was closed for repairs and renovation costing $3.5 million and reopened as the Nature Center in 2021. Among the changes are the vestibule, the enclosed lobby at the entrance, and new water bottle filling stations. It has a multi-media auditorium and exhibit spaces for nature interpretive programs, such as the Salt Marsh Room, Discovery Room, Pond Room, and Night Theatre that include a high-tech periscope to highlight the Hudson River Estuary and its surroundings.

In 2005, the Center closed for a renovation and expansion of 125,000 square feet of floor space. It reopened in 2007 with a Center for Science Learning and Teaching. In March 2017, the Jersey City Municipal Council transferred approximately 17 acres to the Center for the $280 million SciTech projects that will include a K-12 school, conference center, and Scholars Village.

On April 25, 2003, Arbor Day, the New Jersey Department of Environmental Protection and volunteers planted trees at the "Grove of Remembrance," south of cobblestone Audrey Zapp Drive. It is a memorial of trees to the 697 New Jersey residents who died during the September 11, 2001, tragedy at the World Trade Center Twin Towers in Lower Manhattan. The trees, such as birch and dogwood, were selected for the environment. Two walkways allow visitors to travel the 10.8 acres in the park. A Memorial Circle of weeping cherry trees and benches is a quiet space for reflection by visitors.

At the waterfront, opposite Ground Zero is the Empty Sky monument, named for a Bruce Springsteen song. It was dedicated on September 10, 2011, to commemorate the tenth anniversary of the 9/11 attack. It honors the 749 New Jersey residents and those associated with New Jersey who died at the Twin Towers.  Architect Frederic Schwartz, with Jessica Jamroz, designed the $12 million memorial sponsored by the Port of Authority of New York and New Jersey, the State of New Jersey, and the New Jersey Building Authority. It rests on a 10-foot grassy mound surrounded by weeping cherry trees.

Two parallel 30-foot high panels of brushed-reflective stainless steel have names of the deceased etched in random order and are illuminated from the base of the walkway. The memorial's outside concrete walls span 208 feet,10 inches to replicate the width of the Twin Towers. A steel remnant from the towers complements the memorial.

Frederic Schwartz, who witnessed the collapse of the towers, also designed the 9/11 memorial for Westchester County at the Kensico Dam Plaza in Valhalla. It is named The Rising for the commemorative song also by New Jersey's Bruce Springsteen.

Visitors to Liberty State Park enjoy its free open space, cultural events, and outdoor recreation with picnic areas, playgrounds, boat launches, 100-acre Green Park, and Liberty Landing Marina (opened in 1998).  Its undeveloped acres have been reclaimed to allow for freshwater wetlands at Freedom Way and a wildlife refuge supervised by the Division of Parks and Forestry. Ferry service takes visitors from the park to the Statue of Liberty and Ellis Island. The park's interior of 250 acres that was once used by the railroad has undergone successful ecological restoration to transform the area for tourism and the community.