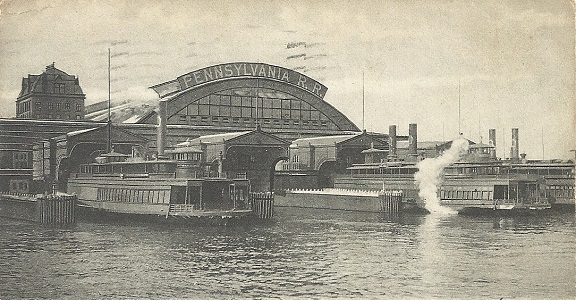 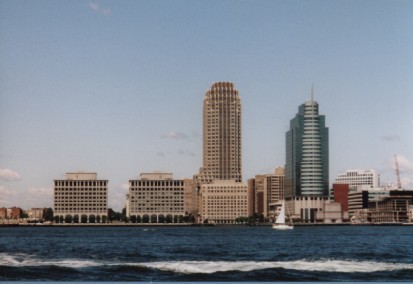 Developed as a transportation hub and financial center, Exchange Place was considered the "center" of Jersey City from the 1890s to the 1920s. It started on ten acres of reclaimed land from the Hudson River for $140,000. Its redevelopment restored the historic area and brought the return of several financial and commercial institutions. The removal of former sites at the Paulus Hook area, such as the Colgate-Palmolive Company complex, which stood on Hudson Street for 150 years, gave way to corporate towers and Jersey City's own skyline along the Hudson River.

The New Jersey Railroad and Transportation Company (NJRR) initiated the placement of a terminal on the Jersey City waterfront. In 1839, it bought the riverfront property owned by mill operator Isaac Edge and, in the 1850s, began the long process of building a bulkhead on landfill and pilings. The bulkhead extended the foot of Montgomery Street into the Hudson River.

In 1853, the New Jersey State Legislature approved the railroad's purchase of the ferry franchise and water rights from the Associates of the Jersey Company for $485,000. The transaction was upheld by the US Supreme Court in an opinion rendered by Chief Justice Roger B. Taney. The common council of Jersey City further enabled the development by passing an ordinance permitting the use of certain wharves and piers on the Hudson River for a ferry operation, dating back to pre-Revolutionary War times. In 1858 the Pennsylvania Railroad (PRR) bought the assets of the NJRR and "built a 500-foot long passenger station with five tracks and started a ferry service to Cortlandt Street at 10-minute intervals" (Pearlman). The two-story brick structure, located just north of Montgomery Street at Hudson Street, had towers at each corner. Architect Job Male designed the depot facility. The old NJRR depot, west of Hudson Street, that dated back to 1837 was also renovated.

In 1873, a new railroad terminal, designed by Joseph Wilson, was constructed by the Pennsylvania Railroad and damaged by fire ten years later. Architect Charles Conrad Schneider designed a replacement and more elaborate terminal. Modeled after a terminal in Frankfort-on-the-Main, Germany, the seven-story PRR Terminal was built in 1891. Completed in 1892, it became the largest terminal in the United States. The arched roof of the building had a single span of 250 feet. Four elevators brought passengers to and from the Hudson and Manhattan Railroad, known as the "Tubes," one hundred feet below the structure. This terminal also succumbed to fire in 1898 and was replaced the following year. It was demolished in 1953, and the site was used as a parking lot for many years.

The PRR built a ferry house in 1891. It once accommodated ten ferries offering passengers transport on new "double-decker" ferries from Jersey City to Cortland Street in Manhattan, Brooklyn, and Staten Island for a nickel. New Jersey truck farmers brought their produce to Jersey City to ferry across the Hudson River to New York City as they had before the Revolutionary War. In 1901, the PRR completed its transportation project at the foot of Exchange Place with an office building that had an entrance at 26 Exchange Place. It was razed in 1960.

In 1891, the PRR constructed the elevated railway at the eight blocks of Railroad Avenue (renamed Christopher Columbus Drive) and east of Grove Street over a viaduct near the terminal to Newark Avenue. It extended the PRR railway through part of Jersey City and was to eliminate the dangers to pedestrians inherent to grade crossings, thereby reducing insurance rates from fewer casualties. These considerations took precedent over aesthetic considerations and caused pollution affecting neighboring tenement apartments.

After the turn of the twentieth century, electric trolley cars owned by the Public Service Company ran its service from the PRR terminal at Exchange Place taking passengers south to Bayonne and parts of Hudson County. The Public Service depot, next to the Pennsylvania Railroad ferry slip, had a large covered shed and sheltered several trolley lines for the city.

The bustling Exchange Place complex soon appeared outdated from an earlier transportation era. The PRR, having developed a transportation center in downtown Jersey City, began to focus its attention across the Hudson River. In 1910, it opened Pennsylvania Station in New York City. It gave commuters railway access to mid-town Manhattan via the new Hudson River tunnels. In 1913, it began the Lincoln (formerly Hudson River) Tunnel from Weehawken. Passenger train service was rerouted through its Pennsylvania stations in New York and Newark, and the business center for the city found its way to Journal Square.

By 1931, the PRR updated the ferry service at Exchange Place by building three two-story piers for freight and passenger service. Ferry transport, however, had already slid in popularity when the Holland Tunnel opened in 1927. The mounting costs of maintaining and operating the Jersey City facilities against incoming revenue resulted in the discontinuation of regular ferry service in 1949. Exchange Place was also affected by the demolition of manufacturing plants in the downtown section of the city. The Wilson and Meseck Lines used the waterfront to run excursions to amusement parks at Rye Beach (Westchester County, NY) and Rockaway Beach (Queens, NY) in the 1950s.

The PRR terminal was razed in 1963, the last train leaving on November 7, 1961. the site was used as a parking lot for several years. The removal of the trestle for the elevated railway began in September 1963. The common council of Jersey City purchased the embankment site and paved Railroad Avenue between Henderson and Warren Streets. For some observers of the city's development, "Although the old trestle once represented hope for Jersey City's financial future, its demolition . . . [was] also a hope. It is one of the first steps in the redevelopment of the downtown area" (Pearlman, Jersey Journal). The PRR sold its five acres of Railroad Avenue and Exchange Place holdings to the city, owning more than five hundred acres overall in 1965.

When New Jersey approved the Aldene Plan in 1967, passenger rail and ferry service in Jersey City were officially deemed part of its past. The Jersey Central Railroad ended train and ferry service that same year. The Erie Railroad had closed the Pavonia Station in 1958. However, the potential for rapid transportation service in one of the most densely populated areas of the northeast could not be ignored. The PATH purchased the Tubes at Exchange Place and renovated the railway service that serves commuters between New Jersey and New York City. And in a reversal about the trains and ferries in Jersey City, the Hudson Bergen Light Rail System of New Jersey Transit returned passenger service to Jersey City in April 2000 with a convenient stop at Exchange Place, one of thirteen stops in the city. Commuters could leave the Colgate Center Ferry dock to the World Financial Center and 38th Street in New York City.

Today, the site of the former PRR Terminal is the J. Owen Grundy Green Acres Waterfront Park. Built on a pedestrian pier at the foot of Montgomery Street, it is part of the Hudson River Walkway and named for local historian J. Owen Grundy.

The imposing Katyn Forest Massacre Monument, unveiled in 1991, stands at the end of Montgomery Street. It was sculpted by Polish-born Andrzej Pitynski of New York. The 34-foot bronze statue of a soldier--mouth gagged, hands bound, and struck in the back by a bayoneted rifle--stands atop a granite base that holds Katyn soil. It commemorates the Soviet massacre of over 22 thousand Polish prisoners, soldiers, and others in April and May 1940, when Soviet troops invaded eastern Poland by order of Joseph Stalin. The event led to the partition of Poland and the dissolution of the nation during World War II. The east side of the pediment has a bronze relief depicting the plight of starving Poles sent to Siberia.

The revitalization of the Jersey City waterfront in the 1980s gave Exchange Place the distinction of having the construction of three consecutive buildings among the tallest in New Jersey. The first was Exchange Place Center at 10 Exchange Place on the site of the former PRR office building completed in 1988. Architect Harry B. Mahler of Grad Partnership in Newark designed the mixed-use building of post-modern or contemporary style architecture on 2.5 acres at the tip of Exchange Place. It is east of Hudson Street and on the north side of Exchange Place with a view of the Hudson River. Located above the PATH tunnel, the center offers commuters lobby-level shops and access to the PATH elevators. The center's interior is noted for the nineteen-foot high lobby of gray granite and green marble with a coffered ceiling.

Exchange Place Center is a thirty-story skyscraper of masonry and green glass; it rises 485 feet above the Hudson River and extends skyward. The masonry base has a seven-story parking garage, and the office floors rise above the base clad in green glass. Reporter John Zeaman describes the center's design: "The building's most distinctive feature is its east façade, which has a bay-like projection that maximizes views of New York Harbor from the offices. The projecting bay tapers in four telescoping stages, culminating in the triangular spire. The tapering effect creates a perspective illusion that accentuates the sense of height" (Zeaman). The adjoining PATH station is a semicircular masonry structure designed to complement the Exchange Place Center. The World Trade Center attack of September 11,  2001, caused flooding of the station and suspended service. It reopened on June 29, 2003, after renovation and expansion, restoring service to Newark, Hoboken and 33rd Street, New York.

Second, the 101 Hudson Building, completed in 1992, is located on the site of the former Colgate-Palmolive complex. Designed by Brennan B. Gormanthe, the 548-foot structure is a neo-deco-style office building. Rising to forty-two stories, the building is crowned by a series of setbacks and has a marble and granite lobby accessed by a dual entrance.

In 2002, the Hudson Building gained much attention when a pair of endangered peregrine falcons nested atop the building. The New Jersey Department of Environmental Protection's Division of Fish and Wildlife approved the state's first wildlife webcam, set up on the building with a grant from the Verizon Foundation, to observe the peregrines and their care for the three chicks that were hatched in the May of that year.

And third, the Goldman Sachs Tower at 30 Hudson Street, completed in 2004, is the second tallest building in New Jersey. It occupies 1.36 million square feet of office space at the former site of the Colgate-Palmolive property. The architectural firm of Cesar Pelli (1926-2019) designed the post-modern design office tower for the global investment banking institution. The forty-two-story, blue-tone structure, with a tapered top, stands at 781 feet. The contemporary design offers occupants a panoramic view of the Hudson River, especially from the interior block-long glass atrium with the opulence of marble from Italy and France. Skidmore, Owings & Merrill L.L.P., known for its work on the Sears Tower, designed the interior.  Pelli Clarke Pelli Architects are known for the Petronas Towers in Kuala Lumpur, Malaysia, and the World Financial Center in New York, among its more than 100 projects.