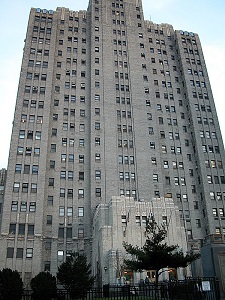 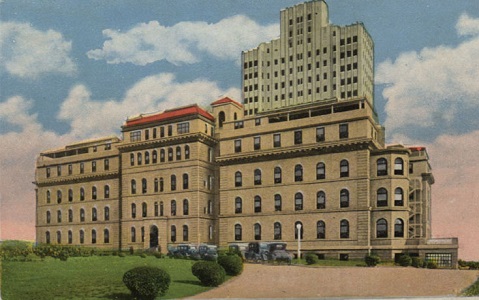 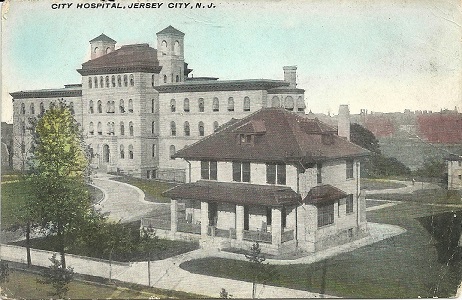 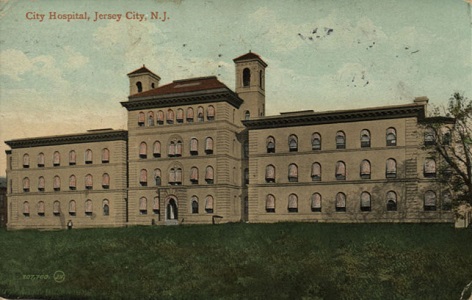 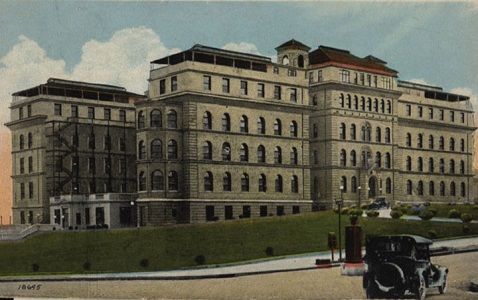 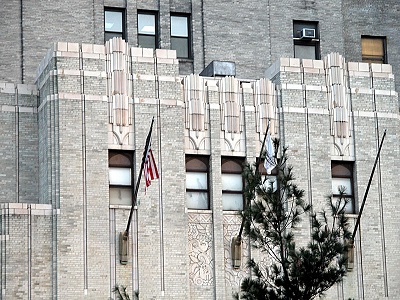 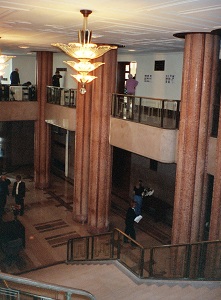 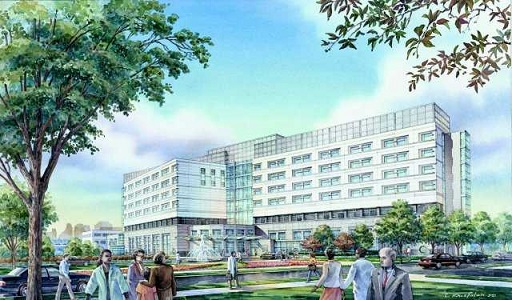 One of Mayor Frank Hague's goals for Jersey City was to found a free state-of-the-art hospital. When the hospital was completed, the Jersey City Medical Center stood as "a monument to the policy of municipal socialism" and a testimony to the "Hagueism" of a bygone era (Donohue). After it closed in 2004, the hospital complex was rehabilitated for The Beacon, a luxury condominium. Today, the  Art Deco-style buildings, perched on the fourteen-acre site at the Palisade Cliffs, grace the Jersey City skyline and are the city's most recognizable landmarks. The complex is New Jersey's largest site on the National Register of Historic Places (1985).

John T. Rowland, a native of Jersey City and the architect for the Jersey City Board of Education, was the center's general architect. Christian H. Ziegler, who succeeded Rowland, designed the Margaret Hague Maternity Hospital and Murdoch Hall. The Art Deco buildings feature stepped setbacks on the upper floors, terrazzo floors, marble lobbies, glass and brass railings, and terra-cotta engravings of Egyptian and Greek motifs and floral patterns. The city-run buildings were made fireproof, an advance in public safety for its day.

Jersey City's first hospital opened in 1808 in a building intended as a public market by the Associates of the Jersey Company. Known as the "pest house," it treated patients affected by cholera and smallpox epidemics. Its location at the foot of Washington Street in Paulus Hook isolated the patients from the community. The pest house later served as a county poorhouse until the development of Laurel Hill in 1861. On December 15, 1868, the Jersey City  Board of Aldermen reclaimed the pest house as a medical facility and renamed it the Jersey City Charity Hospital. True to its name, it provided free medical care by physicians who contributed their services.

When the Charity Hospital outgrew its usefulness to the community, the Board of Aldermen bought land at Baldwin Avenue and Montgomery Street in 1882 for a new hospital. The locale was chosen to remove the hospital from the industrial development at Paulus Hook. In 1885, it was renamed the Jersey City Hospital with 200 beds. However, the facility could not keep pace with the demands of the growing city. In 1909, the original hospital building was reserved for men and a second wing was added for women patients.

When he became mayor in 1917, Hague planned for an expanded facility that would attract the best physicians and staff for Jersey City residents. Hague renovated the original double-wing, six-story City Hospital and erected a new 23-story structure for surgical cases. Opened in 1931, Dr. George O'Hanlon was the new facility's first director. With the Works Progress Administration funding during the Depression, new buildings were added to the Jersey City Medical Center Complex. Hague showed his interest and pride in the medical facility with an office in Murdoch Hall, seemingly a second office away from City Hall. The mahogany-paneled office had a concealed door to leave the complex by the back hallway.

The Medical Center also became the pride of the city with free health care for residents. Reportedly, during the Hague years, the hospital cost $3 million to operate annually, but in a year, such as 1929, it received less than $15,000 in payments. By 1934, 750 employees treated approximately 900 patients daily. On October 2, 1936, the Medical Center Complex was dedicated. President Franklin D. Roosevelt and Mayor Hague attended the ceremony with a reported crowd of 200,000. President Roosevelt was driven from New York City through the Holland Tunnel to Jersey City. He arrived amidst heavy security by the Port Authority of New York and NewJersey and Jersey City police and firemen,

From its completion in 1941, the Medical Center was considered larger than necessary for the city's population, overstaffed, and fiscally irresponsible. In 1988, the Medical Center declared bankruptcy and became a private, nonprofit organization. In 1994, the State of New Jersey designated the Medical Center as a regional trauma center. In the late 1990s, it became a core teaching affiliate of Mount Sinai School of Medicine and was approved for open-heart surgery.

The Pollak Hospital started at the site of the Jersey City School for Crippled Children (see A. Harry Moore School). It became the Infectious Disease Hospital, and, in 1934, received a loan of $2,996,000 from the Reconstruction Finance Corporation for a new county tuberculosis hospital. Named for Dr. B.S. Pollak, the 250-bed facility treated chest diseases. When completed in 1936, the 22-floor hospital, at 320 feet, was the tallest building in Jersey City. In 1989, it was surpassed by Exchange Place Center at 490 feet high.

Murdoch Hall, the residence for graduate and student nurses.was the Medical Center's last structure built in 1941. The seventeen-story Art Deco building also housed the Center's School of Nursing, begun in 1907, and named for Jessie M. Murdoch, Director of Nurses and a friend of Hague. It had a gymnasium, swimming pool, and auditorium. Its main attraction was a modern art lobby.  A marble staircase with a glass-and-brass banister led to a circular mezzanine. An indoor crosswalk connected the nurses' residence to the Margaret Hague Maternity Hospital.

In 1993, the art deco building took center stage in the movie Quiz Show, directed by Robert Redford. The film was based on the 1950s television show Twenty-One, whose main character was the contestant Charles Van Doren, a Columbia University professor. The interior of Murdoch Hall had a decor similar to the art-deco design of NBC's Rockefeller Center where the game show originated. To spruce up the vacant building, approximately $25,000 was spent in preparation for the film production.

In 1991, the Jersey City Medical Center merged with the Greenville Hospital at 1825 Kennedy Boulevard. They formed the Liberty HealthCare Systems, a hospital consortium in Hudson County. It was New Jersey's primary care responder in the aftermath of the attacks on the World Trade Center's Twin Towers on September 11, 2001. The following November, construction began for Liberty Health/Jersey City Medical Center on a 15-acre campus at the intersection of Grand Street (355) and Jersey Avenue. The new hospital, with a view of New York Harbor and Liberty State Park, is accessible from the Hudson-Bergen Light Rail Jersey Avenue Station.

The Medical Center, a private, nonprofit hospital costing $217 million, was dedicated on June 14, 2004. It was funded through federal loan guarantees from the Federal Housing Administration, state grants, and municipal assistance. Governor James E. McGreevey, who was born at the Margaret Hague Maternity Hospital, attended the ceremony. The two buildings at the time were the seven-story steel and granite Wilzig Hospital, named for Siggi B. Wilzig, a former president of Trust Company of New Jersey, and the Provident Bank Ambulatory Center.

RBSD Architects designed the 364,000 square-foot acute care hospital and the 44,000-square-foot ambulatory care center in a joint venture with Ballinger of Philadelphia. The Medical Center became a teaching affiliate of the Mount Sinai School of Medicine. In 2013, it joined the RWJBarnabas Health system that includes Clara Maass Medical Center in Belleville, St. Barnabas Medical Center in Livingston, and Newark Beth Israel Medical Center.

In 2011, LibertyHealth Systems purchased the Jersey City Museum at 350 Montgomery Street for administrative offices, and, in 2012, leased Greenville Hospital at 1825 Kennedy Boulevard from Community Healthcare Associates for an outpatient medical facility. Both properties were sold and are now owned by RWJ Barnabas Health since 2021.

To preserve the historic Medical Center, the Jersey City Redevelopment Agency sold the complex to Metrovest Equities of Manhattan for $6.5 million in 2002. Renamed The Beacon, Metrovest proposed the rehabilitation of the buildings into rental and condominium apartments with commercial space and cultural venues for a projected cost of $350 million. According to George Filopoulos, president of Metrovest: "These structures could never be rebuilt and nobody would try, because of the lavish amounts of space--grand entrances and 25-foot ceilings, wide hallways with marble walls, theater space, and solariums, plus the ornate detail of the interior and exterior" (Martin).

Filopoulos renovated two of the towers into condominiums, named the Rialto and the Capital, costing over $100 million for the first phase of the development. In recognition of the transformation, The Beacon was named "Project of the Year" by the NJ District Council of Urban Land Institute in 2009.

In 2012, after the economic downturn in the real estate market, Filopoulos sold five of the undeveloped buildings at The Beacon to the Connecticut development firm of Building and Land Technology (BLT) for $46 million. The following year, the NJ Economic Department Authority granted tax credits of $33 million towards the second phase of the redevelopment of the properties into luxury rental apartments using the names Orpheum,  Mercury,  Paramount. and Tower at The Beacon.

In April 2016, Margaret Hague Maternity Hospital renamed the Hague with 241 apartments was the last of the Medical Center complex buildings completed by BLT.

The restoration at The Beacon marks one of the nation's largest historic property renovations with 1,500 residential units and preserves New Jersey's largest example of the mid-20th century Art Deco-style architecture according to state and national register guidelines.