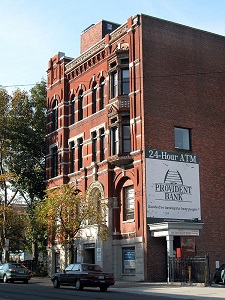 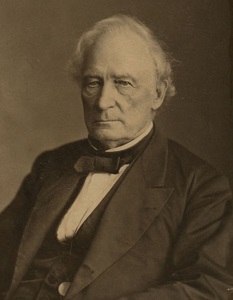 The Provident Savings Institution was the first bank in Jersey City and Hudson County and is New Jersey's oldest mutual savings bank.

The bank was granted a charter in 1839 with John F. Ellis as president. It occurred on the heels of the economic Panic of 1837, and it thereby did not begin to conduct business until 1843 when it opened as The Provident Institution for Saving.  Under the leadership of Dudley S. Gregory, its president from 1841 to 1874, the bank hoped to allay the concerns of depositors with its unique banking operation at the time as a "mutual savings bank" that would assist the immigrant poor in the city. According to its charter, the bank "shall be capable of receiving from any person or persons any deposit or deposits of money . . . and of using and improving the same . . . provided that no part of the funds of said corporation shall be used at any time for banking purposes" (Quoted in An American Success Story 10). The new savings bank granted depositors semiannual dividends and paid no salary to its officers.

The Provident opened in a room in the Temperance Hall, at Washington and York streets, on October 16, 1843. To accommodate the growing number of depositors, Gregory moved the bank's operations in 1846 to the office of its treasurer Peter Bentley at 23 Montgomery Street for daytime transactions and to the Mechanics and Traders Bank providing evening hours.

In 1853 the Provident and the Mechanics and Traders Bank shared a new building at the southwest corner of Plymouth and Washington streets. This property was the former home of Dr. Theodore R. Varick, a surgeon and a grandson of Richard Varick of the Associates of the Jersey Company, at 239-241 Washington Street. The location was chosen for its proximity to the ferry to New York City and commuter traffic in the area.

During the Civil War era, the Provident again shared a building with the Mechanics and Traders Bank, now called the First National Bank, on the corner of Hudson Street and Exchange Place. The Provident took over the building and formally referred to itself as "The Beehive Bank" and then "The Old Beehive."

According to historian Barbara Petrick, "A beehive, symbolize[ed] the thrift and industry of many humble workers . . . ." (Petrick 30). In 1843 a local newspaper, the Jersey City Advertiser, described the purpose of the savings bank: "We expect to see deposits made by mechanics, and artisans, laborers, and servants, shopkeepers and apprentices, men and women, boys and girls . . . these will be the proprietors of the beehives" (quoted in Petrick 30). The bank's earlier association with the local Temperance Society also seems to affirm Gregory's belief that together the bank and the temperance movement could influence the behavior of the city's working poor.

In 1890, the Provident opened a new bank building, and present-day main office, at the northwest corner of Washington and Grand street at the site of the fort at Paulus Hook during the Revolutionary War. That same year, the ground floor of the bank, which had an entrance on Washington Street, became the temporary site of the beginnings of the Jersey City Free Public Library until its present building on Jersey Avenue was constructed.

Although Gregory, known as the "architect" of the bank, had secured great stability for the Jersey City-founded banking institution, the Provident like other banks faced challenges during the financial crises of the nation and banking industry, such as the panics of 1873 and 1893. But none was more threatening to its future than the era of the Great Depression. In 1932, when President Franklin D. Roosevelt declared a "bank holiday" in response to the banking crisis, the Provident was forced to close its doors for the first time since its inception. It was also one of the first banks allowed to resume business.

The Provident's success allowed it to open new branches in the twentieth century. Bank president James B. Throckmorton opened the bank's first branch office at 533 Bergen Avenue in 1928 and another in the Lafayette section at (350) Communipaw and Pacific avenues, taking over the Title Guaranty and Trust branch-office building. Additional branches were started in the Greenville (1553 Kennedy Boulevard) and the Heights (3670 Kennedy Boulevard) sections of Jersey City. President William Neuman Jr. designed the Heights bank branch in 1964. Before his banking career, Neuman was an architect and designed buildings for Christ Hospital, St. Francis Hospital School of Nursing, and the Jersey City Chamber of Commerce Building. The Bergen-Journal Square branch at 895 Bergen Avenue opened in 1965. Provident changed its original name to Provident Savings Bank in 1970.

Provident Saving is publicly traded on the New York Stock Exchange and in 2003 began the Provident Bank Foundation to contribute to local educational and community projects.