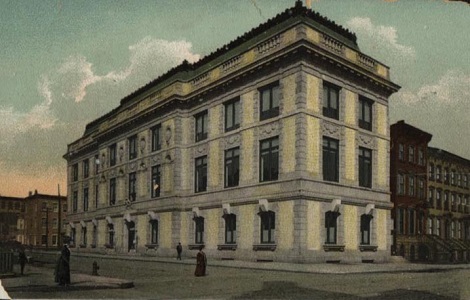 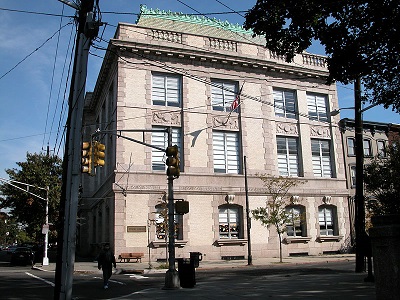 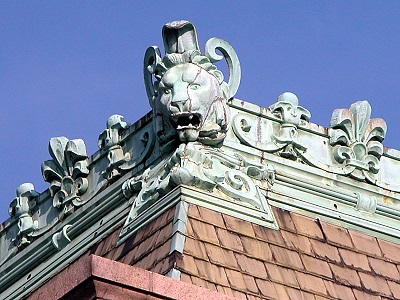 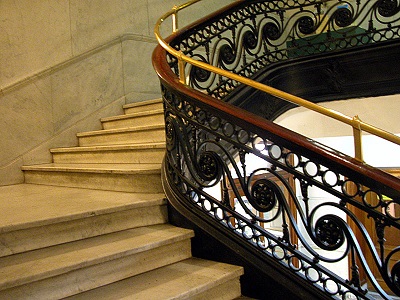 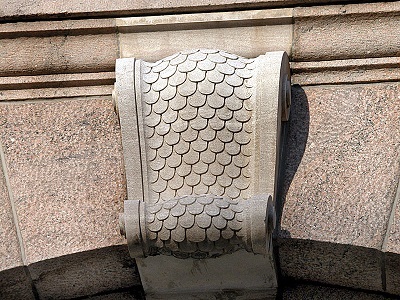 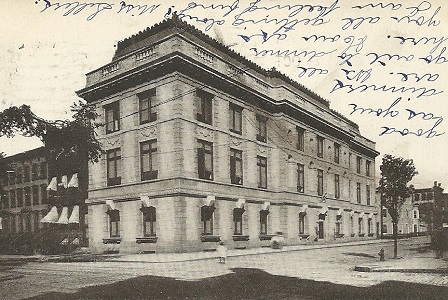 The Main Library of Jersey City is an Italian Renaissance four-story building of granite and buff brick. The firm of Brite and Bacon of New York, selected from forty-seven competitors, designed the building. It was constructed by the Norcross Brothers for approximately $208,000 and completed in 1901.

The distinctive corner building is noted for its contrasting brick and large windows. A frieze with the Greek key appears above the row of windows on the first floor. The head of Minerva by sculptor Philip Martiny decorates the keystone over the front entrance. The first-floor windows display keystones. The seal of Jersey City (right) and the seal of Hudson County (left) flank the building's entrance.

Beyond the lobby of the entrance are a wide marble stairway and black wrought iron railing leading to the fourth floor. An extension to the Main Library was added to the rear of the building on Mercer and Montgomery streets. The eight-story structure, designed by Albert S. Gottlieb of New York City and built by William Robertson & Sons of 15 Exchange Place, is primarily used for the shelving of the library's collection. Gottlieb also designed the library's Greenville Branch on Kennedy Boulevard and Stevens Avenue, the Temple B'nai Jeshurun (now Hopewell Baptist Church) on High Street in Newark, and the landmark Rizzoli Building on Fifth Avenue, New York City.

The first public library in Jersey City began in 1866 as a private member-subscribed venture in the town of Bergen in Library Hall at Ivy Place at the corners of Summit Avenue and Grand Street. The Bergen Fire Department sponsored 200 public school students of "superior scholarship" in Bergen to use the private library. Another library room opened in Hudson City at the corner of Newark and Baldwin Avenue. Neither library lasted due to declining support.

In 1873, the Jersey City Board of Education established a Public School Free Library in the Jersey City High School (now Dickinson High School) on Bay Street. It provided one thousand dollars a year for its maintenance, but management problems ended the project. In 1884, the New Jersey Legislature passed a law for the founding of free public libraries in cities where a local referendum supported a library. After two failed attempts, Jersey City voters approved the provision by a vote of 15,304 to 345 in an April 9, 1889 election. Jersey City Mayor Orestes Cleveland appointed a board of trustees to guide the founding of the library. It included community leaders, physician Dr. Leonard J. Gordon as president, William C. Heppenheimer as treasurer, Michael Murray, Nelson J. H. Edge, and Charles S. Haskell.

Dr. Gordon long championed the founding of a public library for the city.. After its approval and financing, he became the library's director. A memorial window on the library's staircase landing and a bust of Dr. Gordon by sculpto Herbert Adams at the entrance were donated by residents in February 1907. His brick, Queen Anne-style home by architect William Milne Grinnell, constructed in 1887, was at 485 Jersey Avenue, not far from the library.

Awaiting building completion, a temporary library was located on the ground floor of the Provident Institution for Savings building on Washington Street. Space in the adjoining Hudson County National Bank building was leased for a reading room. The library trustees purchased properties for $47,250 at 286 at 288 Montgomery Street, adjoining plots on Jersey Avenue, at the corner of Jersey Avenue and Mercer Streets, and 484 Jersey Avenue. They also selected A.D.F. Hamlin of Columbia University as supervising architect for a new building. On July 6, 1891, the permanent home of the Main Library opened to the public. In its collection were 15,515 books and approximately 300 magazines and newspapers.

The Main Library includes a Children's Room, Federal Government Documents, Lending Department, Reference, and the Joan D. Lovero Collection in the New Jersey Room that holds material on local, county, and state history. In 2019, it was named for retiring director Priscilla Gardner, its first African-American director.

In addition to the Main Library, the city has nine library branches and a bookmobile. One of the largest of the branch libraries is the Greenville Branch (1841 Kennedy Boulevard), at the corner of Boulevard and Stevens Avenue. It was designed by Albert S. Gottlieb at the cost of $256,000 and opened in October 1926. The branch, renamed in 2018, honors the memory of Jersey Journal columnist Earl A. Morgan. The Afro-American Historical and Cultural Society Museum is housed on the second floor of the library building.