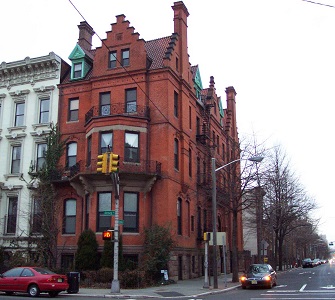 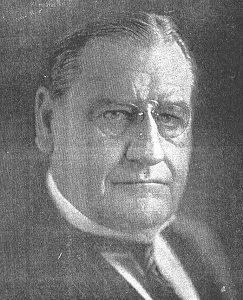 The imposing corner building at Montgomery Street and Jersey Avenue, opposite Van Vorst Park, is the former Heppenheimer Mansion. It was designed for John Ward, circa 1884, by the New York architect Frederick Clarke Withers (1828-1901). With his partner Calvert Vaux, Withers is noted for the landmark Jefferson Market Courthouse and Jail in Greenwich Village, now the Jefferson Market Library. Withers also designed the Weehawken Water Tower (1883), commissioned by the Hackensack Water Company,  listed on the National Register of Historic Places in 1980.

The Flemish Renaissance-style Heppenheimer Mansion is a three-story red stone building with a raised foundation and attic. Prominent chimneys define the roofline of the building as do the stepped gables. Palladian windows on the second and third levels are outlined by balconies and surrounded by decorative ironwork. The copper dormer windows face Jersey Avenue.

In 1892-93,  "General" William Christian Heppenheimer, a prominent figure in banking, business, and government in New Jersey and New York, purchased the building  His title of general came from his service in the old Seventh Regiment of the New York National Guard and then in the New Jersey National Guard as Inspector General and as Aide-de-camp of the Governor of New Jersey. He rose to the rank of Brigadier General when he retired in 1895.

Born on March 27, 1860, in New York City, Heppenheimer was the son of German immigrants who moved to Jersey City when he was four years old. He graduated from Weinham in Germany, studied law at Columbia and Harvard universities, and was admitted to the bar in New York in 1881 and New Jersey in 1883. Active in local and state polities, Heppenheimer aligned himself with the Democratic party and supported Jersey City "bosses" Bob Davis and Frank Hague. He was elected to the New Jersey Assembly, representing the Fourth District in 1887 and 1889, and became speaker of the New Jersey Assembly in 1890. During the 1890s. he served consecutively as New Jersey Comptroller of the Treasury, President of the Board of Finance of Jersey City, and City Treasurer. In 1928 Governor A. Harry Moore appointed him as a member of the Port of New York Authority, later the Port Authority of New York and New Jersey, on which he served to 1933.

Heppenheimer enjoyed playing host at his Jersey City mansion. He entertained an array of individuals from financiers and politicians, like presidential candidate William Jennings Bryan, to athletes. An avid sports fan, Heppenheimer invited the fighter Jack Dempsey to stay at his home as he prepared for his famous 1921 bout with Georges Carpentier. The site of the event at Boyle's Thirty Acres was within walking distance from Heppenheimer's home.

Heppenheimer was a friend and advisor to both Governor Moore and Mayor Hague. Hague called him "the greatest supporter Jersey City has ever had" (Hudson Dispatch, March 28, 1930). When Heppenheimer died on September 16, 1933, Hague is quoted as saying, "His loss is not only a personal one, but is one of great sorrow to Jersey City. He was one of the outstanding citizens of our city and state" (New York Times 20 September 1933). His funeral was held at Saint Aedan's Roman Catholic Church at Bergen Avenue and Mercer Street. He is buried at Holy Name Cemetery. Port Authority workers at the Holland Tunnel held a minute of silence in his honor.

Wisch Associates restored the Heppenheimer Mansion in 1987. Today it is a ten-unit condominium complex.