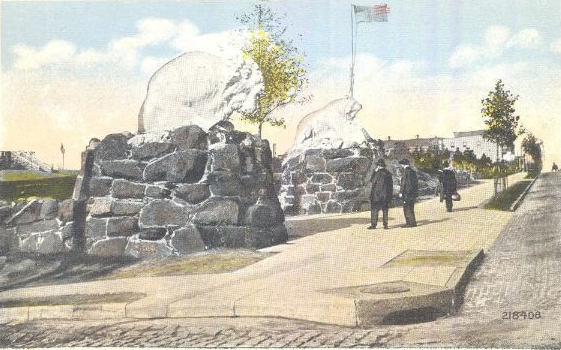 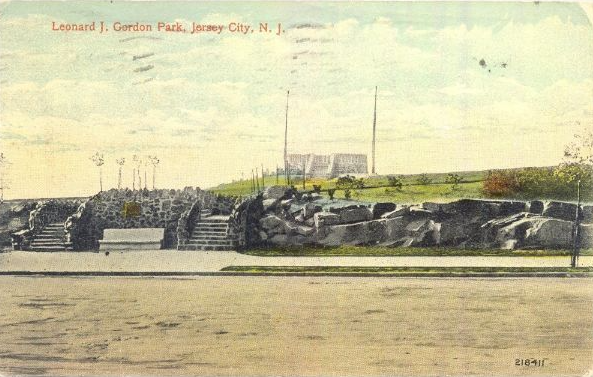 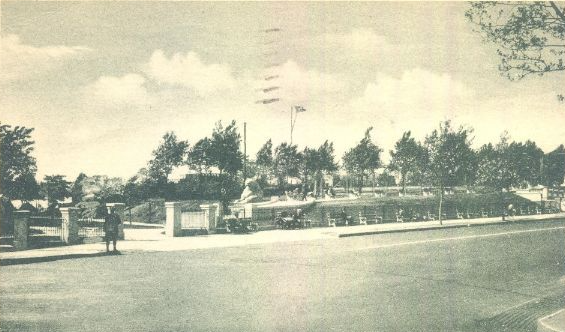 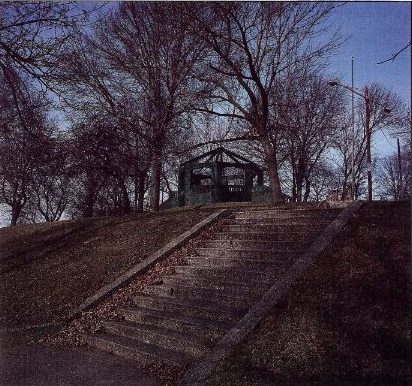 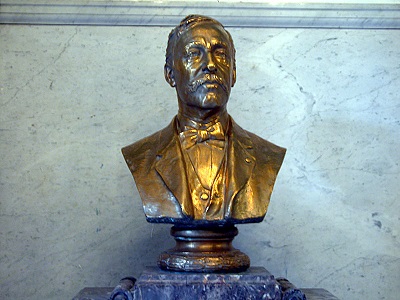 Bust of Dr. Leonard J. Gordon
at the Entrance of the Jersey City Free Public Library
Photo: A. Selvaggio, 2002 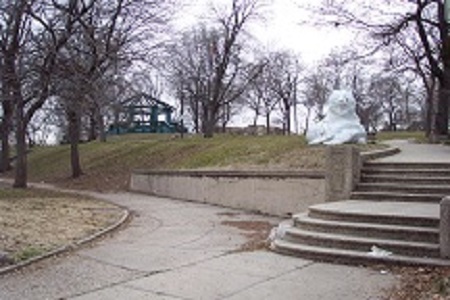 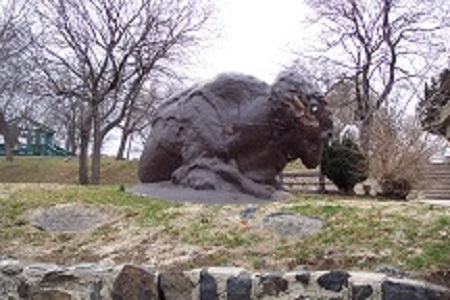 The Dr. Leonard J. Gordon Park at Jersey City Heights is best known for the sculptures of Buffalo and Bears (c. 1907) seen from Kennedy Boulevard and its nickname "mosquito park" after the pesky New Jersey insect.

The park was planned during the "City Beautiful" movement in the United States at the turn of the twentieth century. The movement advocated the revitalization of industrialized communities through public spaces for recreation. The Jersey City Charter Company owned the hillside woodland with stone boulders and sold it to Jersey City for $46,000 on September 19, 1907.=

Municipal landscape architect John T. Withers, who designed the 5.7-acre park, left much of the rocky terrain as he found it. Appointed by Mayor H. Otto Wittpenn, Withers was also responsible for the Mary Benson Park on Newark Avenue and the Bayside Park in the Greenville section of Jersey City. According to local historian J. Owen Grundy, "Withers had made quite a reputation in Jersey City at the turn of the century by giving illustrated lectures before various organizations showing how attractive a city could be if the citizens and public officials cared" (Grundy).

The larger-than-life stone statues of the "buffalo and the bears" are the work of sculptor Solon Hannibal Borglum (1868-1922). He was influenced by the many years he spent on the Western plains of Utah and later Nebraska, where his father owned a ranch. He came to foster an appreciation for the people and animals of the land and visited the Sioux, who revere the buffalo, at their South Dakota reservation. It resulted in his work Sioux Indian Buffalo Dance (1899).

Art commentator Meredith Bzdak remarks that "Borglum's Buffalo and Bears are unusual works for their time. The animals are depicted in a naturalistic fashion, lying directly on the grass and therefore completely within the space of the viewer; they are unencumbered by a base or pedestal. These works . . . typify his spontaneous style. Forgoing strict anatomical illustration, Borglum preferred to simply suggest an animal's form and to infuse the work with a sense of movement" (Bzdak 57). Among his other works are Lassoing Wild Horses (1898) and On the Border of the White Man's Land (1899). They represent his frequent theme of frontier life. Borglum's brother Gutzon is the noted sculptor of Mount Rushmore and the statue of Abraham Lincoln in front of the Essex County Court House in Newark.

An iron fence, anchored in concrete piers, surrounds the urban park. In the center is a circular gazebo or bandstand. On November 9, 1930, the Hudson City Soldiers and Sailors Welfare League, Inc. placed a World War I memorial statue Dough Boy in the park. An American eagle atop a granite shaft was placed in the park by the Raymond Sipnick Post of the Jewish War Veterans.

According to Grundy, the naming of the new park for Dr. Gordon was put forth by William H. Richardson. A member of the city's Board of Shade Tree Commission, he "believed that all city parks should be named to honor distinguished citizens" (Grundy). Dr. Gordon (1844-1905) died two years before the founding of the park. Local leaders agreed that his contributions to the city merited the park's naming. At a memorial for Dr. Gordon, Mayor Mark M. Fagan notes that "No better man or more useful citizen ever lived in this city" (Quoted in Grundy).

A New York native, Dr. Gordon served in the Union army during the Civil War. After moving to Jersey City, he obtained his medical degree from Bellevue Medical Center in 1875 and completed his internship at the Jersey City Charity Hospital that predated the Jersey City Medical Center. After practicing medicine for two years, he was appointed chemist for the Lorillard Tobacco Company.
He was responsible for the placement of the sculpture Soldiers and Sailors Memorial by Philip Martiny in front of City Hall and the advancement of the Jersey City Free Public Library. Dr. Gordon became the president of the library's board of trustees and then the director. In his honor, a memorial window and a bust of Dr. Gordon were donated by residents in February 1907.
Dr. Gordon's brick Queen Anne-style home at 485 Jersey Avenue by the architect William Milne Grisnell was built in 1888, not far from the library at 472 Jersey Avenue.