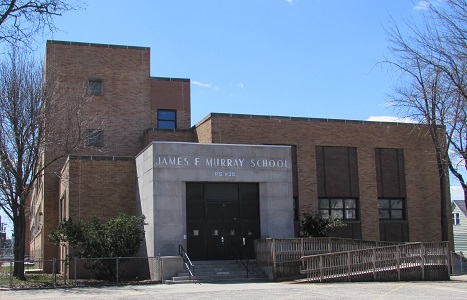 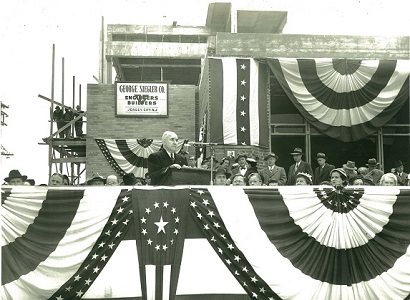 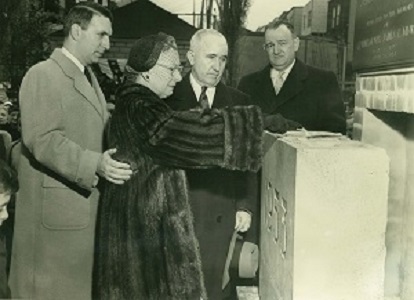 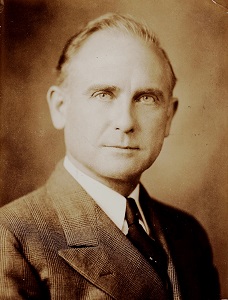 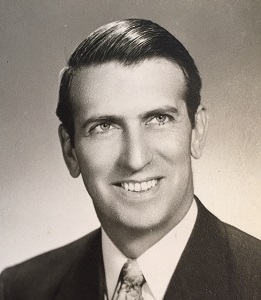 James F. Murray, Jr. (1919-1965)
This widely used publicity shot was taken in 1957 for use in the Victory Ticket campaign
Courtesy, Joe Murray

Named for James F. Murray, Sr., an attorney and indefatigable opponent of long-term Jersey City Mayor Frank Hague, the contemporary-style, three-story elementary school was built in 1953. The new public school was needed at that time to accommodate the increasing student population of the area, the result of several new and planned housing developments such as College Towers.

Located on the south side of Stegman Parkway between Kennedy Boulevard and Stegman Terrace, the site of Public School No. 38 was formerly occupied by a greenhouse and market gardening operation during the late nineteenth and early twentieth centuries.

The property was acquired by the State of New Jersey in the early 1920’s to be incorporated into the proposed campus of the Jersey City Normal School (now New Jersey City University). As the State’s plans for the new normal school were being finalized, it became clear that the lot on Stegman Parkway was not going to be needed, and a mutually beneficial land swap with the City of Jersey City was negotiated.

On July 14, 1928, Mayor Hague and the city commission gave the State Board of Education a deed for the right-of-way at Bayview Avenue in exchange for the deed for the Stegman Parkway property. The deal provided the State with a large unified parcel upon which to construct its normal school campus; however, the City was not in a rush to do anything with its property and the lot remained vacant until the new school was built.

A memorial Jersey Journal article (September 30, 1952) for Murray entitled "Murray Was Consistent Foe of Hague" seems to capture Murray's political career that lasted twenty years. In 1929, Murray led the Fusion Ticket with the support of the local Republican organization and Independent Democrats in a mayoralty election. The ticket lost by the narrowest margin in any challenge to unseat Hague. Murray, leader of the Tenth Ward branch of the Democratic Association of Jersey City, had hoped to become mayor. In 1937, Murray ran for governor, campaigning as the "Roosevelt-Labor Anti-Hague" candidate opposing Hague's choice, his close friend Senator A. Harry Moore.

In 1942, Governor Charles Edison appointed Murray to the office of Hudson County register. Murray saw the position as an opportunity to clean out what he called the "payroll drones" or sinecures in Hudson County.

After Hague "retired" from the mayoralty in 1947, Murray remained intent on removing Hague's supporters from City Hall. He joined the Freedom Ticket led by John V. Kenny, a former Hague ward leader. They challenged Hague's hand-chosen successor and nephew Frank Hague Eggers in the 1949 election. Kenny was elected mayor (1949-1953) and Murray became the Commissioner of Parks.

Murray and Kenny, however, clashed over the proposed nomination of Murray's son (James F. Murray, Jr.) to the US 13th Congressional seat for Hudson County vacated by Mary T. Norton in 1950 against Kenny's choice of Alfred D. Sieminski. Kenny retaliated by undermining Murray's authority as parks commissioner. Two years later, Kenny, seeking Murray Sr.'s support, agreed to name him Hudson County Registrar and his son Murray, Jr., president of the Jersey City tax board and state senator. Although Murray, Sr., died in 1952 prior to the 1953 municipal election, Kenny kept his bargain to endorse younger Murray's candidacy as the Democratic NJ Senator from Hudson County (1954-1958). Kenny, who completed only one term as mayor in favor of local party leadership, also endorsed the naming of the new elementary school on Stegman Parkway for his political ally and nemesis. The cornerstone was set in place in April 1953.

Following in his father's footsteps, Murray, Jr., (1919-1965) continued in local politics. A graduate of Fordham University Law School (1942) and decorated World War II navy veteran, he broke with Kenny and joined the Victory Ticket in 1957. Murray joined with Charles S. Witkowski, Thomas Gangemi, and others in an attempt to defeat Kenny's candidates .

As NJ senator, Murray put forth two projects that would come to pass at the Jersey City waterfront. He proposed that the recently closed (1954) Ellis Island be transformed into an ethnic museum. He also advanced a vehicular causeway be constructed between Ellis Island and Jersey City.

Adopting the "new" medium of television for political campaigns, Murray appeared on the "Voice of Victory" telecasts in 1957 to promote the slate's message. In a political maneuver after the election in which Murray obtained the most votes, Murray was bypassed for the mayoralty in favor of Witkowski (1957-1961). It was Jersey City's last election under the commission form of government, adopted in 1913 under the Walsh-Leavitt Act of 1911, in favor of the present mayor-city council form.

Murray became the director of the Department of Revenue and Finance under Witkowski and retained the post until the mayoralty of Gangemi (1961-1963). This significant directorship allowed Murray to contribute to the city's redevelopment. Among his contributions for middle class housing are the St. John's and Gregory apartments as well as Country Village. He also promoted the revitalization of the area at the entrance of the Holland Tunnel and construction of a new Ferris High School and the Fine Arts Library at Five Corners.

As part of his goal for redevelopment of the city's waterfront, Murray supported land reclamation for industrial parks, such as Liberty Industrial Park, the forerunner for the future Liberty State Park project. His foresight for the city's resources included holding a three-day symposium at Jersey City State College (now New Jersey City University) called Operation Rebirth (1959) and the city's first Trade Fair at the Jersey City Armory (1961).

Joseph M. Murray has produced a video about the Hague Era and the roles of his father and grandfather: "Past Is Prologue: Jersey City, 1949, End of the Hague Era." https://vimeo.com/106156060