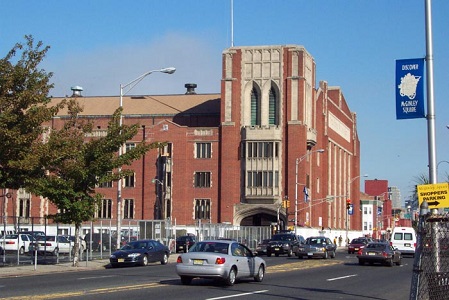 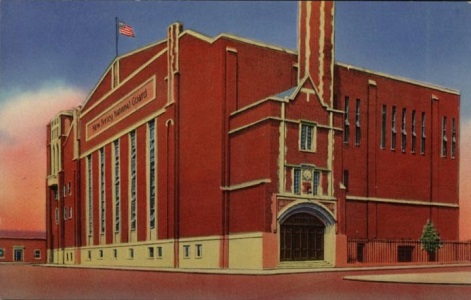 The  Armory was constructed in 1937 as a federal WPA project replacing the old Fourth Regiment Armory facility. It was designed by the chief architect General Hugh Kelly of the Jersey City firm of Kelly and Gruzen. Kelly was a friend of Mayor Frank Hague. He appointed Hugh Clark, a graduate of Cooper Union Institute and a Jersey City resident, to carry out the project with J.K.Harris-Smith, another Jersey City architect.

The massive 175,000 square-foot, three-story beaux-arts armory has English Renaissance features with a basement, granite base, brick exterior walls, and terra cotta trim. The main stairway, with an iron fence, faces Summit Avenue. Decorative terra cotta panels with military insignias are on the second floor of each of three projecting pavilions. On the Montgomery Street side of the Armory is a stone strip engraved with "New Jersey National Guard."

The Jersey City Armory is an Army National Guard facility used for military training. It has also served the community with exhibits, ethnic festivals, prizefights, and entertainment events. At the Armory's first boxing event on June 24, 1918, Johnny Dundee defeated Mickey Donley. In a first-round knockout, Gene Tunney defeated Young Guerini on July 8, 1918. Chuck Wepner, known as the "Bayonne Bleeder," lost to Sonny Liston, a former heavyweight boxing champion, in the ninth round at a match held on June 29, 1970. New Jersey Governor Brendon Byrne and Jersey City Mayor Thomas F.X. Smith entered the boxing ring with Mohammed Ali at a benefit event held for the Jersey City Medical Center in 1972.

The Armory was briefly used by the Metropolitan Football League and as a studio for the movie industry. Local high school and college teams competed in basketball and track and field events in the cavernous space.

In 1987 and again in 1998, the Armory was renovated to share its space with the Jersey City Youth Center in a regional movement for local armories to sponsor youth services. These include an array of educational and self-development programs in a drug-free environment.

In 2002, Jersey City received a grant from the New Jersey Department of Human Services to expand the use of the Armory as a recreational center for after-school activities under the city's Recreation Program. The building reopened with a ceremony on January 3, 2006, to celebrate its $6 million restorations. Among the improvements are a state-of-the-art running track, a new basketball floor, seating, scoreboards, and lighting. The second phase of renovations, sponsored by the New Jersey Department of Military and Veteran Affairs, for $1.7 million began in July 2008. The renovations ensure the continued use of the historic structure.