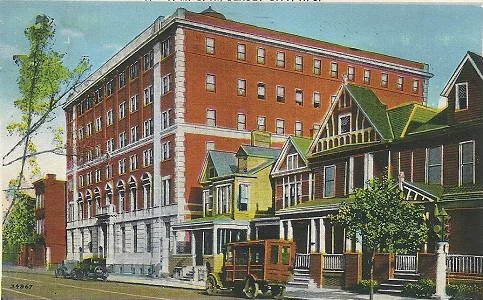 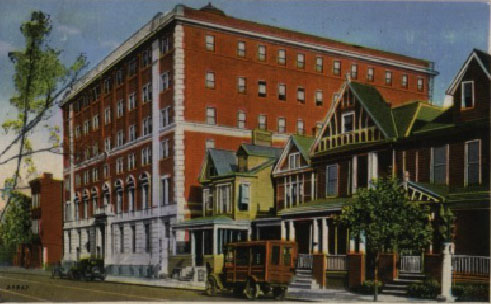 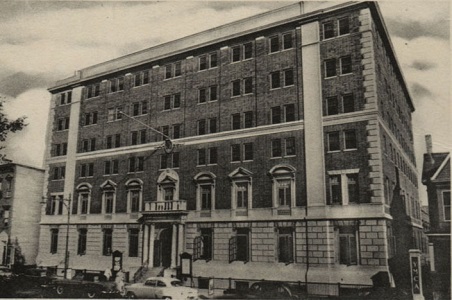 Members of the Grace Van Vorst Church established the beginnings of the Jersey City branch of the Young Men's Christian Association (Y.M.C.A.) in the 1850s. Located in rooms at the corner of Gregory and Henderson streets (now the Gregory Apartments), the "Y" strove to provide inexpensive housing in a Christian environment for young men, both immigrant and native-born, who came to the city to work in Jersey City's waterfront industries during the nation's era of industrialization. Its purpose was to follow in the mission of the first Y founded in the United States in Boston, MA, in 1851, which was dedicated to the spiritual, mental, and physical development of individuals, who in turn will contribute to their communities. The purpose of the "Y" was also to socialize and "Americanize" the immigrant workers in the values of the society.

By the 1860s its members gathered in rooms at Franklin Hall, which had a reading room and library containing 200 books, magazines, and newspapers. Lectures and prayer meetings were also held there. Ministers of the local churches, such as North Baptist, First Presbyterian and Dutch Reformed, were active participants. According to its publication The Journal (1867-68), Y.M.C.A. members debated moral and political issues, ranging from the enforcement of Sunday observance laws to the purchase of Alaska, Bible reading in public schools, and capital punishment. One such debater was Z.K. Pangborn who founded the Jersey Journal. The "Y" also sponsored classes for young men in mechanical drawing, nature study, and German, as well as evening classes for businessmen.

After moving to several locations in the city, the "Y" settled at Montgomery and Greene streets in 1909. Here the Pennsylvania Railroad participated in a residence program, called Bergenview Village, for its employees and those of the Railroad Express service "To help make Pennsylvania Railroad men better father, sons and employees." In an annual report for 1909-1910, the dormitory facility was described as "A home for the man away from home, the homeless . . . to keep them from the evils of the saloon and other places of vice. To render the best service, employees must be sober." Among the other companies that sent their new workers from outside the city to live at the "Y" were Western Electric, Public Service, American Can Co., and the State Highway Department.

After a five-year fundraising campaign following World War I, plans were made to build a new structure on Bergen Avenue, where land was purchased for $35,000. Completed in 1924, the Y.M.C.A. building in Jersey City was designed by architect John F. Jackson, who was responsible for designing "Y" buildings nationally. The Renaissance Revival structure is topped by a stone parapet with the inscription "Young Men's Christian Association." One entered the building through a stone portico with columns in front of the entrance that was eventually removed. Today, steps lead to the rectangular entrance with glass doors. The six-story building with a basement of brick and stone is constructed in a reverse L-shaped design. Above the ground story of rusticated stone, the main feature of the facade is a second story with seven central bays of rectangular windows with pediment window heads, which are alternately triangular or arched, and stone grill decoration below each window. The window over the doorway is set against a background formed by arched stone. Stone quoins line the corners of the building.

The interior of the Y.M.C.A. building was noted for its grand arched gothic ceilings and detailed tile work. Besides the 220-dormitory rooms, there was a reading room, billiard rooms, bowling alley, and a four-lane, 25-yard indoor swimming pool that was an elegant natatorium. An addition to the "Y" opened in 1934 for handball courts and an exercise room.

Over the decades, the Y.M.C.A. made accommodations with a variety of services to meet the interests of the community. It operated as a private, nonprofit agency and received assistance from Jersey City through its Community Development Block Grant funds. Its athletic facilities were upgraded with features such as a Nautilus Center, free-weight room, indoor running track, sauna, and whirlpool. Its education program included courses in public speaking, foreign languages, American literature, dance, and business courses. Its religious programs offered Bible classes on Sunday mornings. Residents at the "Y" paid for their housing by the week or the month and enjoyed the convenience of an on-site cafeteria and meal plan; there were special rates for students.

The "Y" almost closed after 1992, having declared bankruptcy, and it ceased to be a Y.M.C.A. affiliate in 1995. The building is now owned by New Hope Housing, a subsidiary of The Community Builders, a nonprofit group. It renovated the housing residence, with assistance from Jersey City, into a total of 131-housing units consisting of affordable 73-efficiency apartments and 58-single-room apartments with provisions for the homeless and those at-risk. Space is available for the Jersey City Head Start program, church groups, and the municipal recreation department. A new entrance separates the recreational and residential areas.