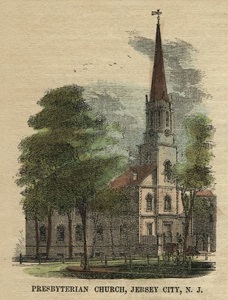 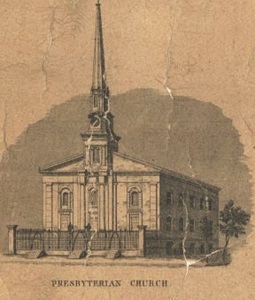 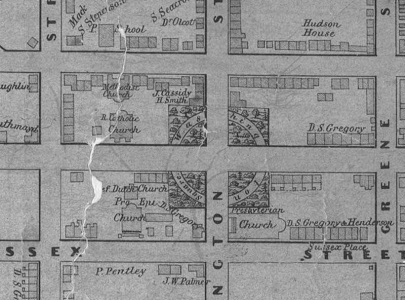 Detail of the 1850 Dripps Map of Jersey City showing the location of the Presbyterian Church in the lower right adjacent to the Washington Square Park
Courtesy, Jersey City Free Public Library 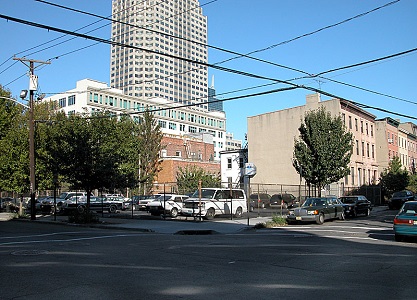 Site of the First Presbyterian Church of Jersey City northeast corner of Sussex and Washington Streets
Photo: A. Selvaggio, 2002

In 1844, the First Presbyterian Church building was assembled in Jersey City after its removal from Wall Street in New York City. The Presbyterian congregation in Jersey City dated back to 1809. They held services at the Jersey Academy when, in 1825, they planned to found a church of their own that took many years and in a unique way.

It occurred with the removal of a brownstone church building from New York to Jersey City.  The arrangement met the needs of two congregations on either side of the Hudson River. The Presbyterian Church in New York, which dates back to 1716, wished to relocate from its property on Wall Street to a new structure on Firth Avenue and Twelfth Street and to use the proceeds from the sale of the property, which brought $148,000, to build the new church. The Jersey City congregation desired a church. Negotiations were completed by the presidents of the two boards of trustees on July 10, 1844. The sale of the building was set at $3000 and included "iron railing, stone wall, coping, flagging, fixtures of the church, stoves, cushions, lamps, chandeliers, and carpets" (Heck). Former Jersey City Mayor Dudley S. Gregory and local manufacturer David Henderson (American Pottery Company), both church trustees, assisted with the financing of the sale.

The first site in Jersey City selected to receive the building was that facing Sussex Street on two lots that had been set aside for church construction by the Associates of the Jersey Company. Trustees Gregory and Henderson each donated an additional lot. Later, a decision was made to place the church building on Washington Street, on a site 100 feet by 100 feet, where Gregory and Dudley owned four lots (Nos. 41, 43, 45, and 47) adjacent to a public square. This required an exchange of the two lots (Nos. 27 and 29) on Sussex Street that the trustees also owned.

The removal of the church building took place between July and September 1844. A builder Richard Bumsted of Jersey City arranged with the local ferry company to dismantle, mark, and cart the stones. Andrew Clark, Esq., an architect and member of the congregation, supervised the project of rebuilding the church. It was to be set on a newly constructed basement, which it did not have at the New York City site. A Jersey City mason, William Bumsted, and a carpenter, John M. Trimble of New York, were also hired for the project. A clock placed in the original steeple was the only alteration to the exterior of the building.

The total cost for the shipment and reconstruction of the church, excluding the basement, was $13,394. At a ceremony on September 30, 1844, a new cornerstone was placed in the building. It contained a wide-mouth jar made at the American Pottery Company owned by Henderson. In the jar were placed newspapers, periodicals, and coins to commemorate the event. The following spring, on Sunday, May 25, 1845, the church was dedicated and officially opened to the community. According to an unpublished paper by John W. Heck, the photo prints made by Mr. W.R. Harrison "practically reproduces the looks of the church as it stood on Wall Street."

The First Presbyterian Church did not last. On June 20, 1888, it was sold to George R. Mc Kenzie for $19,000. According to Heck, "the building was taken down and the 'Kingussie Flats' erected upon the site by the owner. The church members and their organization became united with the Presbyterian Church in the Bergen section of the City. . . ."

Today the site is a vacant lot.