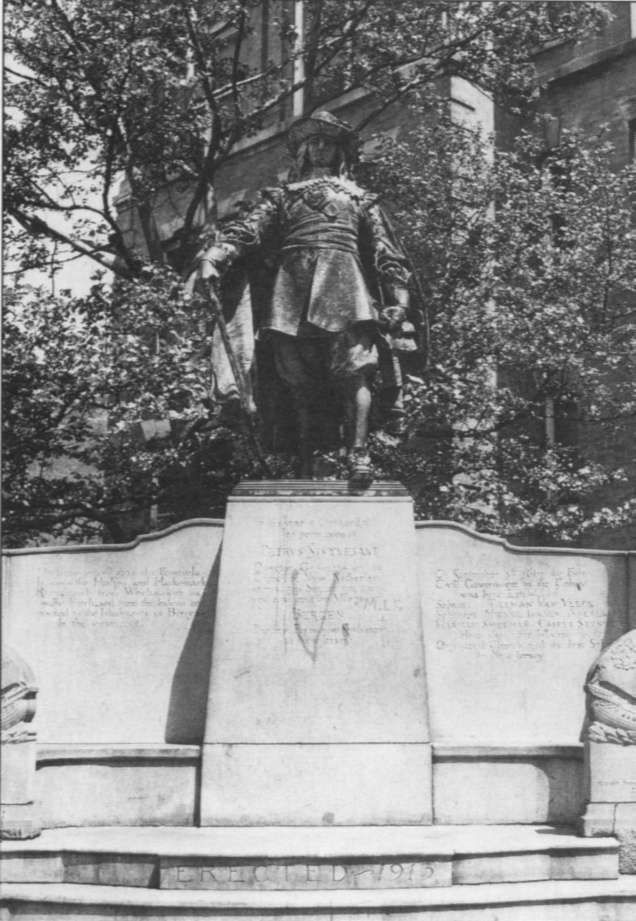 Statue of Peter Stuyvesant in its first
location (1913-1969) on the northeast corner
of Bergen Square in front of the second PS #11.
Courtesy, Jersey City Free Public Library 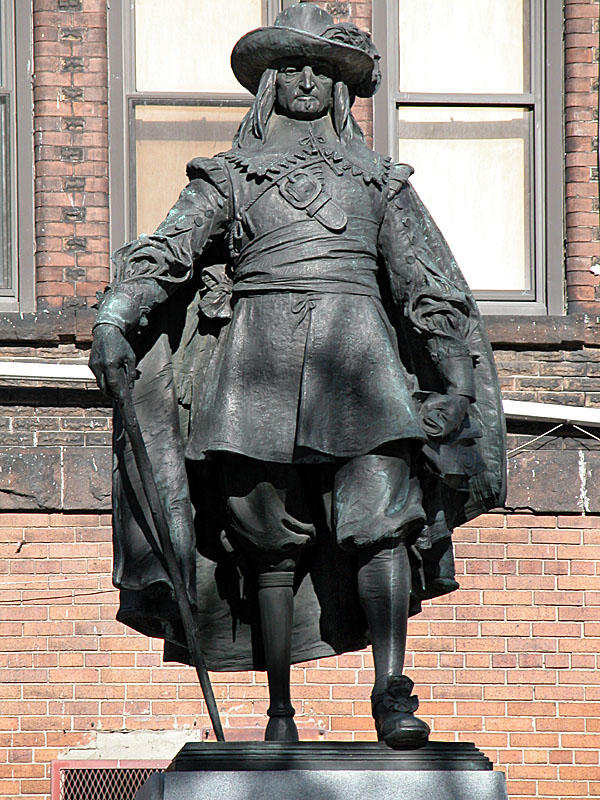 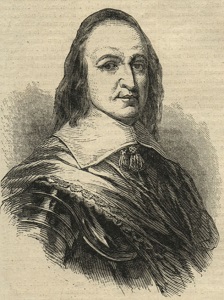 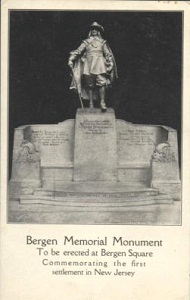 Postcard of the Statue of Peter Stuyvesant
to be constructed on Bergen Square circa 1910.
Courtesy, Jersey City Free Public Library 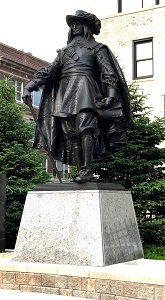 Statue of Peter Stuyvesant in the plaza park near the HCCC Culinary Conference Center at Sip and Newkirk Avenues.
Photo: P. Shalhoub, 2015 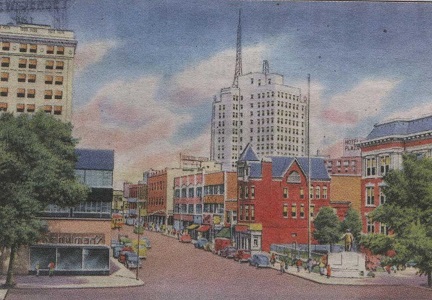 Postcard circa 1950 of Bergen Square. In the lower right,
note the original location of the statue of Peter Stuyvesant
on Bergen Square in front of PS #11.
Source: The Jersey Journal, February 18 2010

The fourth and last Director-General of New Netherland was the somewhat notorious Peter Stuyvesant (c.1612-1672). A former soldier, he had served as governor of the Dutch Caribbean Island of Curacao, where he lost his right leg. The injury left him with the unfortunate nicknames of "Peg Leg Pete" and "Old Silver Nails" from the stick of wood studded with silver nails that formed his artificial limb. The ill-fitting prosthesis may have been the reason for his reputed ill-tempered manner and autocratic style.

Appointed by the Dutch West India Company in July 1646, Stuyvesant replaced William Kieft during the colony's time of most vulnerability. A staunch member of the Dutch Reformed Church, he knew the Bible well and attempted to strictly enforce the rules of his employer. These factors came into play in 1655 when the Dutch West India Company ordered Stuyvesant, illiberal in matters of religion, to concede from his initial objection and allow Dutch Jews from Brazil to live in the colony.

As the new governor, Stuyvesant's charge was to improve the economic status of the colony and to quell Native American hostilities that curtailed the growth of Dutch settlements like Pavonia. In August 1655, he successfully took over the colony of New Sweden along the Delaware River. Returning from that victory, Stuyvesant took on the problems at Fort Amsterdam and Pavonia caused by the "Peach Tree War." He bargained with the Native Americans for the ransom of captives and entered into negotiations that later culminated in a peace treaty signed on March 6, 1660. Afterward, Stuyvesant directed settlers at Pavonia to establish a town for defense rather than live on isolated farms and estates along the Hudson River.

On January 30, 1658, at Fort Amsterdam, Stuyvesant met with Native American chiefs from across the Hudson River for the repurchase of the western shore, that is "all the lands between the Hackensack and North (Hudson) rivers from Weehawken and Secaucus to the Kill van Kull" (Lovero, p. 12). This paved the way for him to authorize the founding of Bergen in 1660, a major impetus for Jersey City's future development. The town was built behind a square wooden palisade as a defensive measure for protection against Native Americans.

The fortified site, near elevated terrain, was a former Native American cornfield and approximately two miles from the Hudson River. On September 5, 1661, Stuyvesant issued a charter of incorporation to the Village of Bergen to include a court of justice, church, and school. The eight hundred foot area is now Bergen Square at Bergen Avenue and Academy Street. During the remainder of Stuyvesant's tenure, Dutch settlers, mostly from New Amsterdam, moved into Harsimus, Paulus Hook, Communipaw, Hoboken, Minkakwa (Greenville), Pamrapo, and Bergen.

Four years later, Stuyvesant tried to defend New Netherland from takeover by England. King Charles II and his brother James, the Duke of York, wanted to close the geographic gap in their control of the northeast coast of America. An Anglo-Dutch rivalry had developed over the slave trade and the availability of cheaper goods from the West Indies. The end of New Netherland would potentially affect eliminate the illicit trade between the Dutch and England's southern colonies.

The Duke of York sent Colonel Richard Nichols with four ships and 400 soldiers to take over the Dutch colony. Nichols first went to Boston for additional recruits. When the English naval fleet took their position at the entrance of the New Amsterdam harbor on August 27, 1664, Nichols sent notice to Stuyvesant to surrender. Stuyvesant tried but could not rally support among the settlers to defend the colony. Rather, the settlers and his council offered no resistance and advised him to surrender. After years of discontent with Dutch rule and Native American warfare, the colonists held back while the English claimed control of the colony. Stuyvesant surrendered to the English, and the Dutch agreed to a peace treaty in 1667.

New Netherland was divided into the English royal colonies of New York and New Jersey. Dutch settlers, as well as Stuyvesant, remained and accepted English rule and law that included the promise of town government. They could keep their property, religious freedom and continue trade with the Dutch. These conditions allowed the Dutch to retain their ethnic culture in America through their customs and their Dutch Reformed Church. Stuyvesant died in 1672 and is interred at St. Mark's Church in the Bowery.

A statue of Peter Stuyvesant once stood in the front courtyard of the Martin Luther King, Jr. School (1969)/ School No. 11, at 866 Bergen Avenue. The statue's placement was proposed in 1910 for Jersey City's 250th anniversary of the founding of the village of Bergen. The Bergen Monument Association raised $15,000 for the monument, receiving contributions from the Bergen Dutch Reformed Church/Old Bergen Church, Jersey City and its Board of Commissioners, residents, and schoolchildren.

In a well-subscribed competition, the design by Scottish-American sculptor J. Massey Rhind (1860-1936) was selected. It would be his second statue of Stuyvesant. The first, completed in 1898, is at Kingston, NY.

The near nine-foot-high statue of Stuyvesant was cast at the Roman Bronze Work Foundry in New York City.  Stuyvesant dons a flowing cape, plumed hat, and seventeenth-century Dutch attire holding a carved walking stick in his right hand. The rolled charter in his gloved-left hand is a symbol of his governance. Local historian John Gomez describes the statue: it, "... was platformed [sic] on a 10-inch-high plinth and affixed to an 8-foot-high semi-circular granite exedra, or wayside seat, with a wingspan of 12 feet. The exedra . . . was caped [sic] at each curling end by Dutch seafaring reliefs" (Jersey Journal 7 February 2011). An inscription reads, "In the year of our Lord 1660, by permission of PETRUS STUYVESANT, Director-General, and the Council of New Netherland, around this Square, was founded and built the Village of BERGEN, the first permanent settlement in NEW JERSEY."

When completed, the monument was placed at an angle to the entrance of Public School No. 11 facing Bergen Avenue. On October 18, 1913, a parade, starting from the Carteret Club (Bergen Avenue and Mercer Street,) marched towards a waiting crowd of 5,000 viewers, who had gathered for the unveiling by Daniel Van Winkle, president of the Hudson County Historical Society. Among the dignitaries in attendance were Acting New Jersey Governor James F. Fielder, who addressed the audience, Mayor Mark Fagan, and City Commissioners A. Harry Moore, James J. Ferris, and Frank Hague.

The statue was well-received by the community. Three engraved tablets affixed to the monument inform passers-by about the colonial settlement of Bergen and its historic significance.

Rhind's other notable works are the bronze figures for the Grand Army of the Republic Memorial (Washington, DC), George Washington (Washington Park, Newark, NJ), Philip Schuyler (Albany, NY), and bronze south doors at historic Trinity Church, (New York City). Rhind's design for a monument in front of City Hall in Jersey City had been bypassed by the selection committee.

The Stuyvesant statue stood at historic Bergen Square undisturbed until the devastating three-alarm fire that destroyed Public School No. 11 on October 3, 1966. The community made known its wishes to Mayor Thomas Whelan to build the sixth school on the site. The future of Stuyvesant, minus the damaged exedra, however, was not clear. It was eventually affixed to a new concrete base and sidelined to the back north corner of the front courtyard.

The new school, designed by Comparetto & Kenny, was named for the Rev. Dr. Martin Luther King, Jr. and dedicated on April 2, 1969. A bronze bust of Dr. King by sculptor Archimedes Giacomantonio was placed in the school lobby in remembrance of the slain civil rights leader.

The Stuyvesant statue remained in the courtyard until, on February 5, 2010, it disappeared from the site. The Jersey City Board of Education, assuming ownership of the statue, had it uprooted by Burns Brothers Monuments. The Board explained that it was planning to redesign the school's courtyard, refinish the statue and place it at the Culinary Arts Plaza at Newkirk Street of Hudson County Community College, a site outside the four-block historic Bergen Square. The statue's removal met the ire of local preservationists and residents looking for answers about its status.

During its hiatus from public view, it was taken to The Beacon complex. Here, under the guidance of the Jersey City Landmarks Conservancy, the statue was restored by Zakalak Restoration Arts of Jersey City. The bronze portrait sculpture was carefully power washed and its surface repaired and treated with three coats of wax. Funds for the restoration came from Hudson County Open Space and the Historic Preservation Trust Fund.

The Peter Stuyvesant statue presently stands at the Newkirk Street plaza, as per an agreement with the City. According to John Hallanan, Jr. of the Jersey City Landmarks Conservancy, it is considered a temporary location while "a new base approximating the look and size of the original inscribed base is waiting for funding." It is expected that the monument will return to the Martin Luther King School, in historic Bergen Square, with its new base and statue intact.