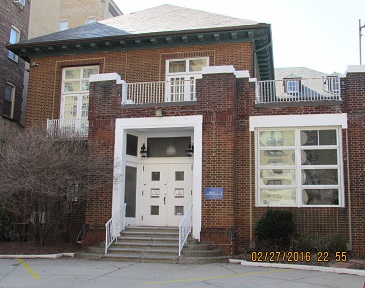 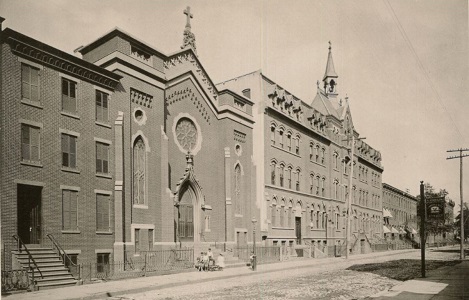 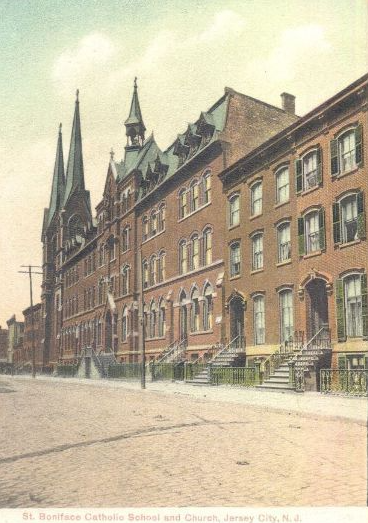 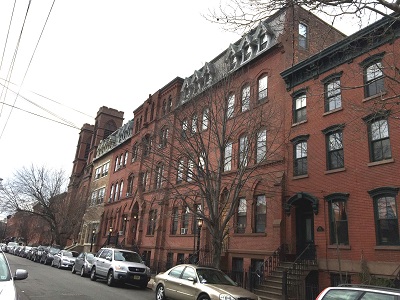 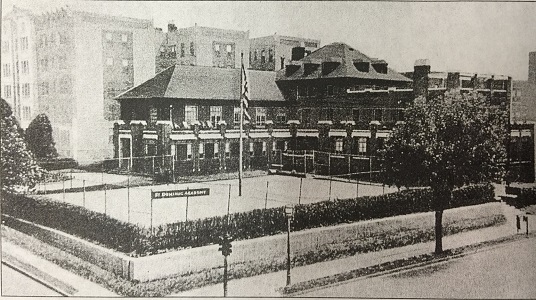 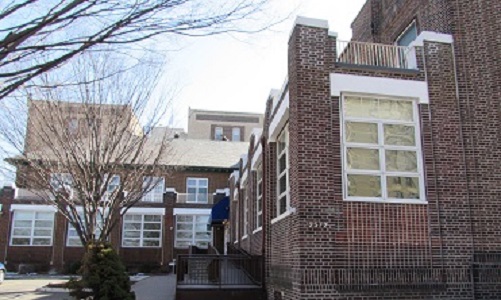 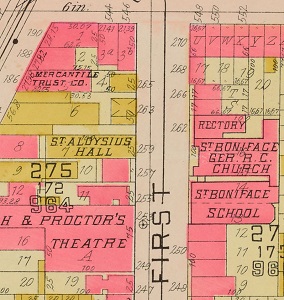 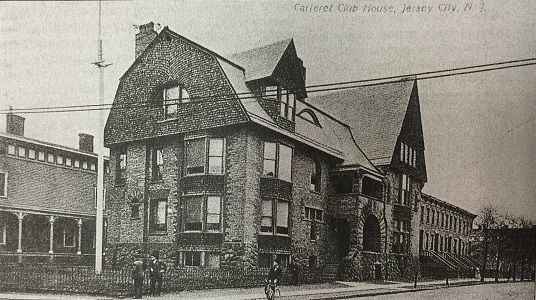 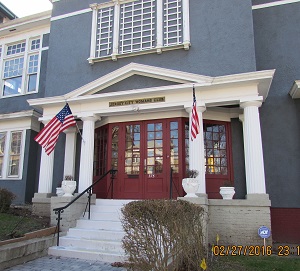 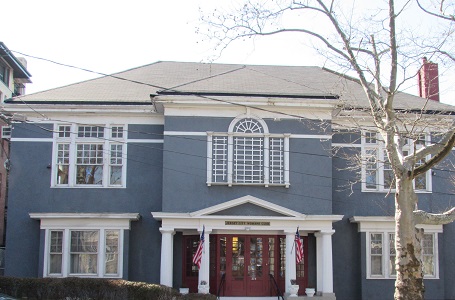 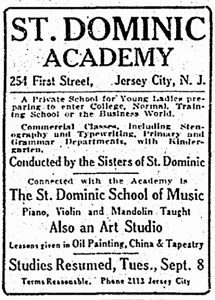 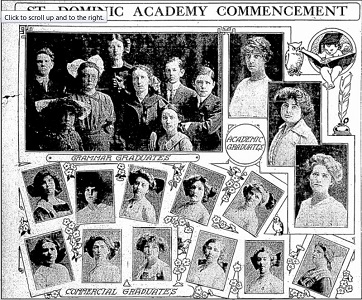 Saint Dominic's began its long educational tradition in Jersey City as part of the German ethnic parish and school of St. Boniface Roman Catholic Church on First Street. German immigration to Jersey City had begun in the 1840s and 1850s and continued in large numbers well into the early twentieth century. The non-territorial parish of St. Boniface Church was established during the 1860s to minister to the newly-arrived German-speaking Catholics throughout the city.

The original academy started with a coeducational grammar school and a much smaller all-girls secondary division. The founders, administrators, and teachers were the Sisters of Saint Dominic of Caldwell, who came to New Jersey from Germany by way of New York City. The cornerstone for the First Street convent and school building was laid on May 24, 1878, and the academy received its official charter on September 21, 1882. The school was enlarged to the east by an addition completed in November 1888.

In 1915, St. Dominic Academy opened a special annex in a large vacant home at 669 Bergen Avenue between Kensington and Duncan Avenues for its secondary school programs. The secondary division students followed one of three different courses: academic, commercial, or stenographic. The Academy's lower grades remained on First St. and later became known as St. Boniface R.C. School. During the 1930s, St. Dominic's operated out of 20 Bentley Avenue. On March 7, 1942, the school was moved to its current location on the corner of Duncan Avenue and Hudson (now Kennedy) Boulevard.

The school purchased its new premises from the Carteret Club of Jersey City. Some of Jersey City's larger homes and most prestigious addresses, such as Jersey City Mayor Frank Hague's luxury apartment building at 2600 Kennedy Boulevard, dominated the neighborhood. During the years that followed, St. Dominic expanded and increased its enrollment at the location.

While the property has retained most of its original exterior features, a new wing for laboratories in the sciences and language was added to the campus in 1994. The Academy's mission to educate immigrant girls under the motto: "Empowering Women for Leadership" has remained for more than 135 years.

At the turn of the twentieth century, social clubs and organizations were at their peak of popularity throughout the United States. Local historian Harriet Phillips Eaton claims that approximately 50 clubs began in Jersey City. They were sex-segregated social and civic organizations, except when men and women gathered for special occasions and speakers.

Reportedly, the city's first such club was the Everett Literary Union, founded in 1865, which met on Newark Avenue. Among literary clubs for women were the Aesthetic Society, founded by Erminnie A. Smith, Odd Volumes (New Jersey State Federation of Women's Clubs), Cosmos Club, and Ramblers (associated with Hasbrouck Institute). The Woman's Club of Jersey City was a service organization, and the Ceramics Club invited women to enjoy the craft of pottery.

Among the men's clubs were the Crescent Club, Catholic Club, Jersey City Club, New Jersey Club, Elk's Club, and Palma Club. Politics was on the agenda at the Hudson County Democratic Society and the Union League. Sports enthusiasts joined the Athletic Club, Golf Club, and New Jersey Athletic Club. Gun clubs, such as the Carteret Gun Club of Bergen Point (Bayonne), held pigeon shouting, and boating clubs, such as the Orion Rowing and Athletic Association and Hudson Boat Club, were popular.

One prominent men's club was the Carteret Club. Founded on November 17, 1885, the members briefly rented the old De Mott homestead on historic Bergen Square, near Vroom and Academy streets. W.W. Coffin was its first president. The club may have been named for either Sir George Carteret, one of the two royal proprietors of colonial New Jersey, or his cousin Philip Carteret, the colony's first proprietary governor (1665-1682).

In March 1889, the club built a "Romanesque shingle-style club house" at the northeast corner of Bergen Avenue and Mercer (former Church) Street (Gabrielan 74). The four-story brick building had all the entertainment and social amenities of the day--bathing, bowling alleys, cycling on the ground floor, and rooms for billiards, games, smoking, and reading. The third floor had a ladies' parlor, music room, and library. The fourth-floor gymnasium was also used for receptions and performances. The club boasted 358 active members and 245 associate members, namely women who "enjoy the privileges of the club on Thursday evenings, and all afternoons, excepting Sundays and holidays" (McLean 184).

In September 1917, after selling the property to Saint Aedan's RC Church for a rectory, it built a more fashionable meeting place on the southeast corner of Duncan Avenue and Hudson (now Kennedy) Boulevard. The L-shaped two-story red brick building is elevated from the street for privacy; its main entrance is accessed on Duncan Avenue. It offered club members a gracious country club-style setting in a residential neighborhood. They could avail themselves of bowling alleys, playing bridge, two outdoor tennis courts prominently placed at the corner of the property (now a parking lot), and a banquet hall. Here the Lincoln Association met for the 110th anniversary of the birthday of Abraham Lincoln in 1919.

Across the street from the Carteret Club building between Duncan and Fairview Avenues was the Carteret Garage and the small city park known as the Vorhees Quadrangle. During the 1950s, the park was enlarged and renamed in honor of World War II veterans S/Sgt. Robert H. Boyd, Lt. Walter M. Boyd, and Pfc. Joseph McGuiness, who grew up on Duncan Avenue. The park was recently renovated by the city in 2015. The adjacent Boyd-McGuiness Apartments for senior citizens, ca 1981, takes its name from the park. The Carteret Garage carried the name of the men's club into the 1960s.

In 1942, the Carteret Club sold its property to Saint Dominic Academy. The club continued to hold meetings at a Fairmount Avenue restaurant and was renamed the Bergen Carteret Club. Its last meetings were held at the Yellow Bowl Restaurant on Sip Avenue, now the site of the Hudson County Community College Culinary Institute.

On March 30, 2015, Saint Dominic added an off-site property to its campus from a generous donation. It is the former 6,000-square-foot meeting house of the Woman's Club of Jersey City, now Siena Hall. Located on Fairmount Avenue, around the corner from the historic Divine Fairmount (now Fairmount Hotel) on Kennedy Boulevard, it is one block from the academy.

Designed by Jersey City architect Charles H. Detwiller (1863-1940), the two-story, Colonial Revival-style house, erected in 1910, features a three-part facade with a full portico flanked by two-story wings. Single-story Ionic round-fluted columns frame the glass-paned double door beneath a pediment. On the second floor, a Palladian motif window with stained glass appears over the entrance. The roofline is accented by a cornice and broad frieze. The interior has well-appointed meeting rooms that contained collectibles and a grand ballroom.

In 1894, Mrs. A.J. Newberry founded a service club, the Woman's Club of Jersey City. with Cecilia Gaines Holland as its first president. It attracted a membership of 200 and originally held its monthly meeting at the Hasbrouck Institute. Its motto, "In great things, unity; in small things, liberty; in all things, charity," the non-profit organization was particularly active in the life of the city. Like other women's clubs of the time, it promoted social reform through community projects like the addition of kindergartens to the school curriculum and the expansion of libraries. Ahead of its time in these social projects, the Woman's Club opened a free kindergarten in 1897 before being adopted by the Jersey City school system, and it sponsored the Odd Volumes, a women's book club, before the opening of a free public library in Jersey City in 1891.

In 1898, the Woman's Club also sponsored and published the writing of Jersey City and Its Historic Sites by Harriet Eaton to preserve the history of the city. In 1911, while she was president of the Woman's Club, Mabel Smith Douglass led her members in a campaign for the Trustees of Rutgers University to found a separate public college for women in New Jersey. Backed by the New Jersey State Federation of Women's Clubs, she succeeded in the founding of the New Jersey College for Women in 1918 and became its first dean. In 1955, the college was renamed for Douglass and is now Rutgers Douglass Residential College.