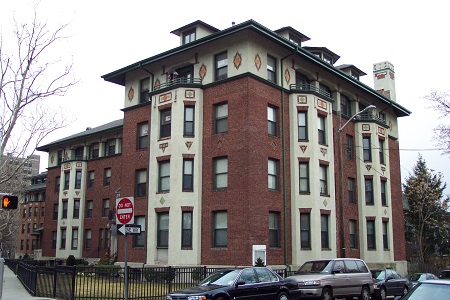 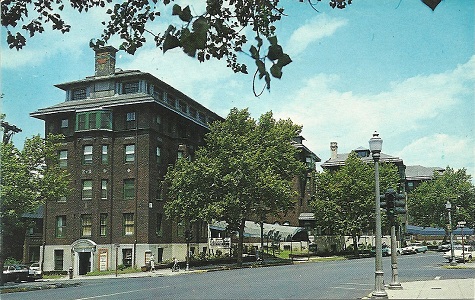 Known as the "grand lady of Jersey City," the Fairmount Hotel is an example of an early twentieth-century hotel and apartment. Two L-shaped four and one-half story brick and concrete buildings are connected by a one-story structure with dining and meeting rooms. Constructed in two stages, the first or east building was designed by the firm of Newman and Harris in 1909, and the second or west building by Frank Newman in 1912.

The two Arts and Crafts-style buildings are similar, executed in Flemish-bonded brickwork, but differ in some details. The bays in the first building are stucco with geometric patterns of inlaid brick and mosaics, whereas the second building has bays finished in brick. Its main entrance is a modification of the Neoclassical revival style of the first building's primary entrance on Kennedy Boulevard. It has a limestone frontispiece with engaged, fluted Corinthian columns and cornices. An arched doorway frames glazed doors with iron grilles.

Each building has a terra cotta plaque with the letters "F" and "A" for Fairmount Apartments inscribed with a fruit-bearing tree above the third-floor window of the entrance bay. The original green Spanish tile-hipped roof was replaced with an asphalt roof with jerkinhead dormers during a recent renovation. A large section of the original roof had a one-story garden. Most of the windows are wood, double-hung in molded frames. The multi-light windows on the fourth floor are described as "casement windows with leaded glass transoms in the dining room, the leaded glass windows in the main stairway and diamond-paned casement windows in the jerkinhead dormers" (National Register of Historic Places 7).

Father Divine, an evangelist minister, bought the hotel in 1962 from the Peter Stuyvesant Corporation, owners since 1954, for over $400,000. Born George Baker in Georgia about 1882, he began his ministry in Harlem as Major J. Divine during the Depression. He aided those in need with an employment agency and free dinners. The popularity of his missions or "heavens" spread through his Peace Mission Movement in New York, Philadelphia, and New Jersey. He preached the moral life of racial equality and celibacy and was regarded by his followers as the incarnate manifestation of God or "God in the flesh."

The Divine Fairmount ran according to the International Modest Code established by the Peace Center Church and Home, Inc., established by Father Divine. He and his wife Mother Divine, Edna Rose Ritchings, disallowed smoking, drinking, gambling, and vulgar language at the facility. Men and women lived on separate floors to ensure "pure" lives. An 11:30 PM curfew and a "no tipping" policy were enforced. For several years, the dining room was open to the public. Diners were asked to offer a "donation" for their banquet-type meals. The reasonable rates for hotel residents kept the occupancy rate at optimum levels. Members of the Peace Center Church held services several times a week at the hotel.

After the death of Father Divine in 1965, the number of his followers started to decline. In 1986, the hotel was sold to Gold Coast Realty and then to the Ingerman Group in 1994. It was renovated and today is a fifty-nine-unit senior residence that reopened in 1995.