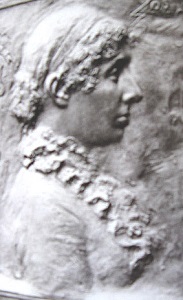 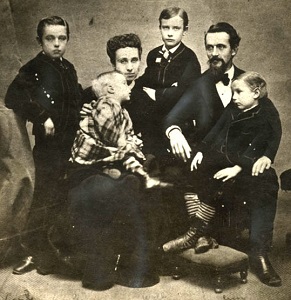 An ethnologist and geologist, Erminnie Adele (Platt) Smith founded the Aesthetic Society of Jersey City in 1876. Jersey City historian J. Owen Grundy calls Smith a "very remarkable woman, one of the most talented and illustrious that Jersey City ever claimed" (Jersey Journal 3 December 1969)

Smith was born in Marcellus, NY, in 1836 and graduated from Troy Seminary, NY, in 1853. She married Simeon H. Smith. In 1866, he took a position as superintendent-cashier of the Central Stock Yards in Jersey City where they lived. He served on the Jersey City Board of Aldermen, the New Jersey Assembly, and was active in the Lincoln Association of Jersey City. Erminnie and Simeon Smith had four children.

The Smith family lived in Germany for four years during the 1870s. In Germany, Erminnie continued her studies in mineralogy and crystallography. She became an expert on the Six Nations, or Native American tribes called the Iroquois Nation of New York and Canada, specializing in their languages. In 1880, she was retained by the Bureau of American Ethnology of the Smithsonian Institution in Washington, DC. The first woman inducted into the American Academy of Science, Erminnie was a member of the American Association for the Advancement of Science and the New York Historical Society.

In 1876, Erminnie Smith again settled in Jersey City. Her home on Pacific Avenue was noted for its "picturesque Gothic charm." She became active in several cultural organizations and joined Sorosis, a women's club that met in New York City. In Jersey City, Smith founded the Aesthetic Society and its first president. The Society's goal  was to promote the "cultivation and education of a taste for the beautiful in literature, science, and art." Grundy claims that the Aesthetic Society was "perhaps the first woman's club in these parts to be devoted to educational rather than purely social or charitable pursuits." He also claims that it was an intellectual salon on a par with that of Mabel Dodge in New York City.

The Society met on Saturday afternoons at her home. When it could no longer handle the overflow of attendees, the meetings were held at the Lafayette (Dutch) Reformed Church on the northwest corner of Communipaw Avenue and Pine Street.

Among the Society's active supporters were Smith's wealthy neighbors who lived in the ornate dwellings and row houses of the city's Lafayette section. Among its roster of approximately 500 members were women whose husbands were leaders in Jersey City in the 1870s and 1880s, such as Mrs. E.F.C. Young, the wife of the president of the First National Bank of Jersey City and Joseph Dixon Crucible Company. Other notable members of the Society included: the Rev. Phebe Ann Coffin Hanaford, pastor of the First Universalist Church in Jersey City; attorney William H. Speer, later general counsel of Public Service Corporation; the Rev. Cornelius Brett, pastor of the Old Bergen (Dutch) Reformed Church; and the Rev. William Rankin Duryee, pastor of Lafayette Reformed Church.

The Society's cultural activities in arts and letters featured music, poetry, theatrical productions, and recitations. Appearances by some notable personages of the time also drew substantial audiences. The Irish poet Oscar Wilde spoke at one of the Society's meetings in June 1882. Z.K. Pangborn, the editor of The Evening Journal (later the Jersey Journal), was reported to have been somewhat amazed at Smith's invitation to the "notorious" poet. The British author Matthew Arnold spoke on December 29, 1883, about the works of Ralph Waldo Emerson. In 1877, Thomas A. Edison showed the audience his early version of the "talking machine."

After six years, the Society published Echoes of the Aesthetic Society of Jersey City (1882), a compilation of songs, papers, essays, and poems presented at its meetings. In 1885, Smith represented the state of New Jersey at the New Orleans Exposition as commissioner of the Department of Woman's Work.

Erminnie Smith was only fifty years old when she died at her home on June 9, 1886. She was buried at New York Bay Cemetery after a funeral service at the Lafayette Reformed Church. The Aesthetic Society established the Erminnie A. Smith Memorial Prize at Vassar College after her death. Vassar also received the mineral and fossil specimens that Smith collected and kept in her home in Jersey City.