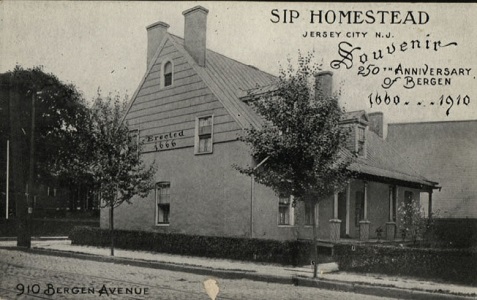 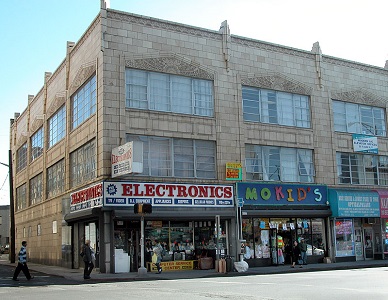 Southeast corner of Newkirk and Bergen Avenue
Site of the Sip Manor House
Photo: A. Selvaggio, 2002 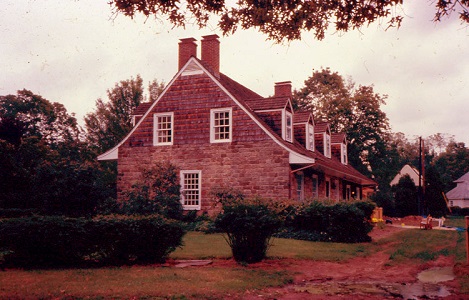 Present-day Sip Avenue is named for Jan Ariaense/Adriaesen Sip, the patriarch of one of the founding families of the colonial New Netherland and the village of Bergen. His home, one of several houses constructed by the Dutch settlers within the original fortified Bergen enclave, once stood not far from the present-day intersection of Sip and Bergen Avenues. Arguably New Jersey's "oldest" existing house, the Sip Manor was saved from demolition in the 1920s when it was disassembled, moved, and reconstructed as a private residence in the suburb of Westfield NJ.

The first owner of the Dutch Colonial house is presumed to be Nicholas Varleth, one of the patentees of the property in Old Bergen. It was built between 1664 and 1666, soon after the English take over of New Netherland from the Dutch for the formation of the royal colony of New Jersey.

The house stood on a town lot that was granted by the Director-General of New Netherland, Peter Stuyvesant, to Nicholas Varleth and Balthazar Bayard on January 3, 1662. The grant was later confirmed by Governor Philip Carteret of New Jersey in August 1671. Varleth arrived in New Netherland in 1652 and became a prominent member of the Court of Bergen and later the Council of Governor Carteret.

After Varleth died in 1675, his heir sold the house to Sip in 1699. Sip too had emigrated from Holland and possibly settled in Bergen before 1663. The garden on the property was noted for the imported tulips from Holland, among other flowers, and giant willow trees. The Sip family members were active in the settlement of Old Bergen and donated part of their property to the construction of the first Old Bergen Church.

The Sip family supported the Tories during the Revolutionary War. It is claimed that when British general Lord Charles Cornwallis came to Bergen in search of General George Washington, he spent a night in the Sip household, not far from the Van Wagenen household of patriots. General Cornwallis reportedly hanged three spies on the branches of a willow tree before he left the next day. The tree is said to be one that Stuyvesant once sat under during a visit to the property.

In 1824, General Marquis de Lafayette visited Bergen Township for the Fourth of July celebrations. He stopped at the Van Wagenen or historic "Apple Tree" House and the Paulus Hook home of his former comrade Colonel Richard Varick at Prospect Hall. While in Bergen, Lafayette planted two elm trees near the Sip Manor house.

Richard Garret Sip was the last descendant to live in the house. In 1924, he put the house up for sale, hoping it would become a historic landmark. The banker General William C.Heppenheimer was briefly the "nominal owner" of the house, and then it was temporarily occupied by the Michel and Moore realty firm. The future of the Sip House soon looked grim when renovations to Bergen Square and nearby Journal Square required the widening of Bergen Avenue. While city leaders protested the drastic changes that would forfeit a local landmark, Mayor Frank Hague deemed it an encumbrance. Saving the house meant that it needed to be moved, but it was considered too wide and too costly to be removed to Lincoln (then West Side) Park as suggested.

Amidst secrecy to avoid local dispute, the Sip Manor House, purchased by Arthur H. Rule, was torn down in stages by the Goldberg Wrecking Company starting on May 24, 1926. On August 20, 1929, the Jersey Journal reported that the house was rebuilt in Westfield under the supervision of New York architect Bernard Miller. He had studied photographs and paintings, and even landscaping, of the original property to restore the building.

With its Dutch Colonial architecture, the Sip Manor House features a steep overhanging roof and small dormer windows. The first story is of brick construction and the upper story and roof are shingled. Tunnel-like storage places in the bedrooms served as a shelter for the children during attacks by Native Americans. Beams were added to give support to the living room, a kitchen pantry was built, and the front door is now used as a back entrance. The original brick and beam foundation were reused.

Parts of the house that were lost or destroyed in the process, like the banister and handrails for the stairs, were reproduced. Three-inch thick doors retain their original casements and sills, and the windows are in their original casements. Wooden pegs, rather than nails, were used to reinstall the flooring, and latches, rather than doorknobs, were used on the doors. The dormers, trellis work, windows, chimneys, and shutters have been changed or added.

A bronze tablet was placed on the Bankers' Building at the corner of Newark Street and Bergen Avenue to mark the site of the Sip Manor House. The dedication was conducted by Henry W. Runyon, president of the Jersey City Chapter of the Sons of the American Revolution. It read: "Site of Sip Manor. Jan Ariaense Sip. Erected 1666. First Dutch House in Old Bergen. Sons of the American Revolution." The plaque was stolen and all that remains is its outline on the side of the corner building at Newkirk Street and Bergen Avenue.