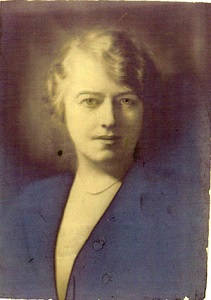 A physician and advocate for children with disabilities, Margaret Sullivan Herbermann was born in Jersey City on January 30, 1878, the daughter of Irish immigrants. She attended Jersey City schools, Pratt Institute in Brooklyn, and in 1908 graduated from the Women's College of Philadelphia, a medical school for women. For a specialization in surgery, Dr. Herbermann continued her education at the College Hospital in Philadelphia, PA, Columbia University, and the Post Graduate Hospital in New York City.

Completing her education, Herbermann returned to Jersey City in 1908, where she began a medical practice. She also worked as a physician at the New York Infirmary for Women and Children. In 1914, she became the first woman surgeon appointed to the staff of the Jersey City Hospital, later the Jersey City Medical Center.

Influenced by the Progressive Era reform of the time, Herbermann became president of the Child Welfare Association and the Mothers' Institute, a clinic for women and children. In 1915, Mayor Mark Fagan appointed her to the Jersey City Board of Education. During her tenure on the board, she campaigned for higher wages for teachers and the education of physically disabled children. To accomplish the latter, Herbermann successfully lobbied the New Jersey Legislature for the passage of three bills that required municipalities, having fifty or more special needs children, to provide them with classes and transportation with state contributions.

Her efforts resulted in the founding of the School for Crippled Children at Clifton Place in Jersey City. Considered the "first of its kind in the United States," the school began in 1921 and enrolled children throughout Hudson County. After several years, the school outgrew its facility and a new school was planned. That school today is the A. Harry Moore School on Kennedy Boulevard.

According to biographer Astrid S. Dadourian, "Although Herbermann fought hard for passage of the legislation and played a dominant role in founding the school, Commissioner [A. Harry] Moore (later elected governor) received public recognition for its establishment. Herbermann, according to others, became caught in the intricacies of politics. Because she refused to give in to pressure from Mayor Frank Hague to support certain choices of doctors for positions at the hospital, she believed that he denied her this recognition" (319) Moore had been an advocate for disabled children as a city commissioner and later became a three-time New Jersey governor.

In 1935, after a brief hiatus, Dr. Herbermann returned to medical practice following the death of her husband Henry Herbermann, founder of the American Export Steamship Lines. She had offices at Journal Square and joined the endocrinology department at Lenox Hill Hospital. She died in 1963 and was buried in Holy Name Cemetery in Jersey City.

The Margaret S. Herbermann Manor, a 45-unit workforce housing project at 1201-1217 Summit Avenue, was named in recognition of Dr. Herbermann's advocacy for children with disabilities.