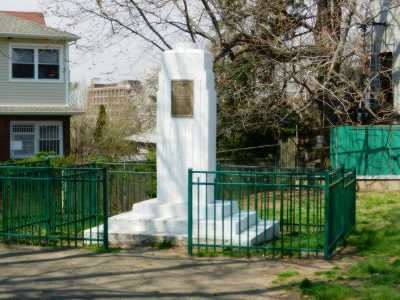 This monument with its bronze memorial plaque is the focal point
of the Lieutenant Robert P. Grover Memorial Park
at the corner of Broadman Parkway and Kennedy Boulevard in Jersey City
Photo: P. Shalhoub, 2013 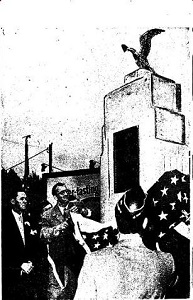 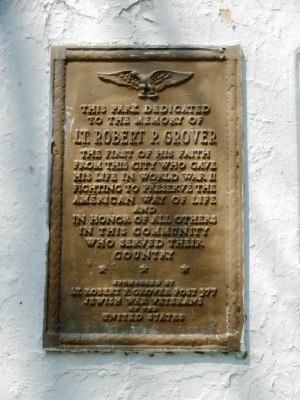 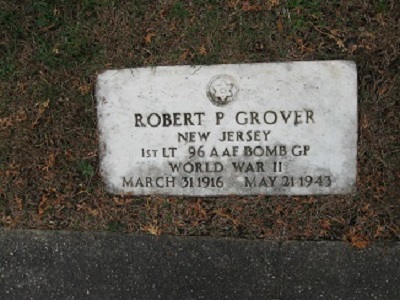 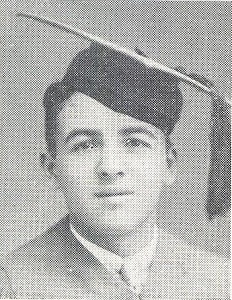 Source: Detail from The Gnome,
The Yearbook of Dickinson High School 1934. 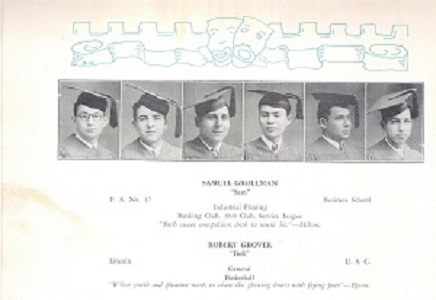 The Lieutenant Robert P. Grover Memorial Park is located at the northwest corner of Broadman Parkway and John F. Kennedy Boulevard in Jersey City. It is one of numerous municipal “pocket” parks which can be found throughout the city. Slightly less than one hundred feet square, Lt. Grover Park lies in the shadow of Snyder High School which stands directly across the street on Kennedy Boulevard.

The park features a fenced-in grassy area with several large shade trees. A pathway curves across the park connecting the Broadman Parkway entrance with another on Kennedy Boulevard. Recently, a local neighborhood organization, the Redstone Townhomes Neighborhood Association, has partnered with the City of Jersey City and the SIM-P Planning and Architecture Group to develop a plan for improving and enhancing the park with new seating areas and floral plantings which will make it more attractive and user-friendly.

Broadman Parkway was officially opened in 1920 and the surrounding lots were soon available for sale and residential development. Original plans for the site called for the construction of several large brick apartment buildings fronting on the western side of Kennedy Boulevard. These plans were never realized and, in 1925, the property was purchased by Henry Roth and Howard R. Cruse. A successful and civic-minded lawyer, Cruse chaired the committee which erected the statue of Abraham Lincoln at the entrance to Lincoln Park in Jersey City. The future site of Lt. Grover Park remained unimproved and was eventually purchased by or donated to the city and was later known as State Teachers Triangle.

The main feature of the park is the memorial built to honor Lieutenant Robert P. Grover, the first Jewish serviceman from Jersey City to die in combat during World War II. The monument was erected by the Lt. Robert P. Grover Post #377 of the Jewish War Veterans of the United States and the park was officially dedicated and renamed in his memory on May 11, 1952.

The tall fluted monument is located in the center of the park. It is painted white and stands on a large three-stepped base. There was once a bronze eagle perched at the top of the monument. A single bronze plaque is affixed to the front of the monument which bears the following inscription: “This park dedicated to the memory of Lt. Robert P. Grover, the first of his faith from this city who gave his life in World War II fighting to preserve the American Way of Life and in honor of all others in this community who served their country. Sponsored by Lt. Robert P. Grover Post 377, Jewish War Veterans of the United States.”

Robert P. Grover was born in Jersey City on March 31, 1916. He was the middle child of James (Jacob) Adolph Grover and Pauline Lieberman Grover. Robert’s father was born in Odessa, Russia in 1886, and had emigrated along with his parents and siblings at the age of thirteen, living on the lower East Side of New York City. Robert’s parents, James (Jacob) and Pauline, married and settled in Jersey City sometime before the birth of their first son, Frederick, in 1912. According to the 1918 Jersey City directory, Robert’s father ran his own printing business, called The Grover Press, from a small shop at 85 Grant Avenue close to the corner of Jackson Avenue (now Dr. Martin Luther King Drive).

"Bob" Grover attended Lincoln High School and graduated from Dickinson High School in 1934. His senior photograph and yearbook entry shows that he enjoyed playing basketball and that he intended to pursue a college education at U.S.C. His yearbook quotation, "When youth and pleasure meet, to chase the glowing hours with flying feet" was taken from Lord Byron's poem, "The Eve of Waterloo." The line refers to the British and Prussian soldiers enjoying themselves at an evening ball in Brussels, unaware of the imminent approach of Napoleon's troops.

Robert Grover was a young man with a bright future ahead of him. In 1940, he was 24 years old and had completed two years of college. Employed as a shoe salesman, he was working about 50 hours a week earning approximately $1.50 an hour. He resided with his parents, grandmother, and younger brother, Murray (Morris). The four story, brick apartment building at 185 Bergen Avenue where the family lived is still standing on the west side of Bergen Avenue today, adjacent to the South District Police Precinct building.

The future prospects for many young men of Grover’s generation were greatly altered in the months following the December 7, 1941, Japanese attack on Pearl Harbor. The United States declared war on Japan and officially entered World War II on the side of the Allied forces. Like many of his fellow countrymen, motivated by duty and patriotism, he voluntarily enlisted in the Air Corps as an Aviation Cadet on December 30, 1941.

A critical part of the Allied offensive strategy was to undermine Germany’s ability to maintain its war machine. New Air Corps units were trained and equipped to destroy German military and industrial targets through intense aerial bombardment. The campaign was set to begin in May of 1942.

After completing his training as a bombardier in April 1943, Grover, now a 1st Lieutenant, was assigned to the 337th squadron of the 96th Bomb Group. On May 21, 1943, Lt. Grover was the bombardier on board a B-17 aircraft that was flying over the North Sea towards the city of Emden, Germany on a mission to destroy the submarine yards of that city. The entire ten man crew was killed in action when their aircraft was shot down about 75 miles north of the Dutch coastline (Hallanan 2012).

Lt. Grover’s body washed ashore about a month later and he was buried in the Netherlands. His remains were eventually returned to New Jersey in 1949. He now rests alongside his parents in Mt. Moriah Cemetery in Fairview, NJ (Hallanan 2012). Lt. Grover's service and sacrifice was recognized by the United States Government, and he was a recipient of both the Distinguished Flying Cross and the Purple Heart medal.

In May 2014 the Redstone Townhomes Neighborhood Association, founded in 2010, planted cherry trees and laid plaques for each of the Jersey City soldiers killed in wars in Iraq and Afghanistan. Rafael A. Nieves, Jr., and Pfc. Leroy Deronde III, killed in Afghanistan, and Spc. Marion P. Jackson in Iraq were honored in a ceremony held in Grover Park.