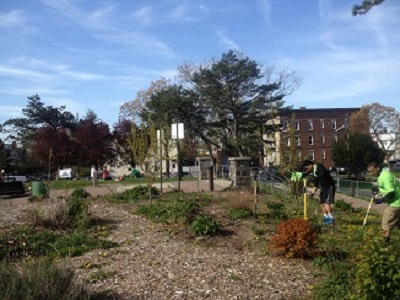 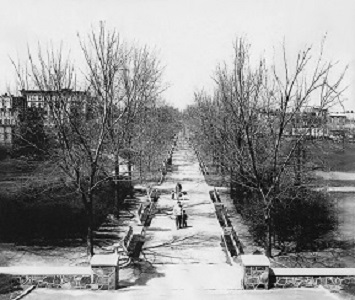 Washington Park sits atop the New Jersey Palisades at the northern border of Jersey City and is part of the Hudson County Park system. It has the distinction of being the only park that serves two adjacent municipalities--Union City and Jersey City. The 22-acre park is located between Union City, which leases a section of the park, and Jersey City on Paterson Plank Road and North Street.

The park was created out of property held in trust for members of the wealthy Suckley family of New York. Over the years, the site was used as grounds for carnivals, circuses, and Wild West shows. In the early 1900s, the civic-minded Allen family of Jersey City led a campaign to expand the county's system of parks by purchasing large tracts of undeveloped land. Two such areas were the Suckley Estate and Curries Woods that both straddled the municipal boundaries of different Hudson County municipalities.

Washington Park is reminiscent of the design laid out during the 1930s under the Works Progress Administration. Today, it offers residents of both communities a variety of recreational opportunities with sports fields for baseball, tennis, racquetball, basketball, and soccer as well as a children's playground, a picnic grove, and gazebos for leisure activities.

Click here to read J.J. Shamburg's detailed history of Washington Park and the Suckley and Allen families on the website of the Washington Park Association of Hudson County, NJ.