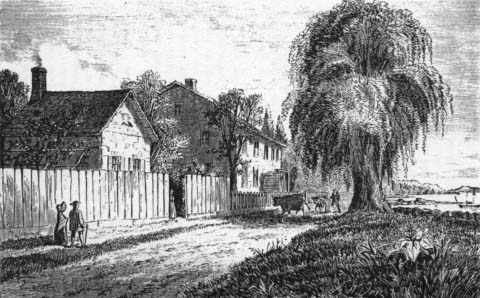 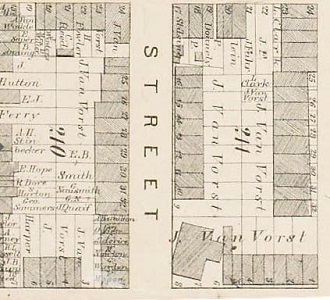 Above: Detail from Hudson County Atlas 1873
showing the outline of the Van Vorst Homestead on the lower center. The structure was in existence prior to the later imposition of the street grid plan in 1804.
Credits: New York Society of Model Engineer's Library, Ralph Sutton Collection and
Historical Maps of New Jersey site of Rutgers University 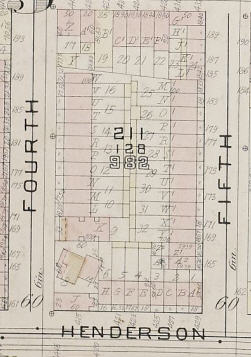 Above: Detail from Jersey City and Bayonne
Plat Book 1919 showing the outline of the Van Vorst Homestead on the lower left corner. The brown coloring indicates stone construction materials, while the yellow and pink colors are the respective codes for woodframe and brick.
Credits: New York Society of Model Engineer's Library, Rich Taylor Collection and
Historical Maps of New Jersey site of Rutgers University

Until its demolition in 1967, the Van Vorst House on Fourth Street stood on a foundation reportedly dating back to 1647. It was regarded as the oldest standing house in Jersey City. The historic claim was investigated with a search for verifying documents at the time of Jersey City's tercentenary in 1960. The study's conclusion, reported in a New York Times article by Joseph O. Haff, was that the house was on "the original foundation of Jersey City's first stone house" (Haff). The investigators were looking for "traces of a stone house built on the shores of the Hudson River in 1647 by Cornelis [sic] Van Vorst" (Haff). The import of the location of the property is that it would identify "the beginning of what was known as 'the settlement of van Vorst,' a forerunner of Jersey City" (Haff).

The six-month "history detective" work for the tercentenary was considered successful. The house on Fourth Street, built about 1885, was indeed constructed on the old foundation and was extant in 1960. A municipal redevelopment program in the old Van Vorst area caused its demolition seven years later. According to this writer, however, the stone house in question could not have been built by Cornelius Van Vorst as he died in 1638. It may have been constructed, however, by his widow's new husband Jacob Stoffelsen as the following story of the Cornelius Van Vorst and his descendants will detail.

Some claim Cornelius Van Vorst/Voorst came to America from the town of Voorst in Holland, although it is noted that there was also a town of Vorst in Belgium. A family member who contacted this website informs that Cornelius Van Vorst was born and raised in Utrecht and the origin of the family name has not been confirmed. According to historian Charles H. Winfield, "The date of his arrival has been set down as 1636. This is probably an error" (Winfield 426). He claims there is evidence that Van Vorst arrived in 1634, went back to Holland in 1635, and returned to Pavonia before June 25, 1636, to work for Michael Pauw. Wouter Van Twiller was the Director-General of New Netherland (1633-1638) at the time of his arrival.

Pauw was a Dutch patroon.  He remained in the Netherlands and entrusted Van Vorst as his superintendent to oversee his American property grant from the Dutch West India Company, business interests and potential tenants. The property consisted of large tracts of land at Hoboken, Ahasimus (later Harsimus), and Aressick (later Paulus Hook) that would become part of Jersey City. According to historian David F. Winkler's, Pauw's grant, "straddled the main delivery route for Indian pelts coming from the west into New Amsterdam and . . . Pauw's agent, Cornelis [sic] von Vorst had positioned himself to intercept the pelts for profit" (5). As a tenant on Pauw's property, Van Vorst became a farmer and cattle raiser and traded with the English colonies.

Winkler notes that Pauw, an absentee landlord, had conflicts with the directors of the colony that stood in the way of fulfilling the obligations of his grant agreement. He was thereby required to sell his land back to the Dutch West India Company for twenty-six thousand guilders.

Local historian Joan Lovero writes that Van Vorst ". . . who spoke French and Dutch and was probably a Walloon, as were many of the early colonists, . . . and though hot-tempered and fond of French wine, . . . became a man of considerable importance in New Netherland" (8-9). Van Vorst built a wooden frame house, ca. 1636, along the shoreline of the Hudson River at Pavonia. The Van Vorst house and that of Pauw at Communipaw were the first two permanent houses west of the Hudson River. Van Vorst remained on his farm, which developed into the first "bouwerie" or plantation known as Ahasimus or Harsimus Cove. He also served the Dutch West India Company as a chief officer or superintendent.

On June 16, 1636, the thatch roof of Van Vorst's cottage caught fire and destroyed the house. Van Vorst himself had fired a cannon on his property after an evening of entertaining guests to end the celebration, and the sparks ignited the roof. He replaced the home and died shortly thereafter in July of 1638. There seems to be no specification of either a stone house or a replacement home. The construction of such a home in 1647 is also complicated by the difficulties for his widow and children in the 1640s.

Van Vorst had three children who were born in Holland--Hendrick, Jan, and Annetje. The name of his first wife is not known. He married Vrouwtje Ides (also spelled Vrontje) with whom he had a son Ide Van Vorst, who is said to be "the first white male child born and married in New Netherland" (Winfield 430). Ide's name is probably derived from his mother's surname. After the death of her husband, Vrouwtje Van Vorst took over the care of the Van Vorst property. According to Winfield, "she leased the farm at Ahasimus for a term of twenty years, agreeing to pay therefor one-quarter of the produce, to build a new frame house, and keep those already built-in repair--the Director agreeing to furnish the necessary brick for the chimney. She also hired from the Director-General three ewes and two rams yielding therefore one-half of the milk and of the increase" (426). She married Jacob Stoffelsen in 1639/1640. He inherited her property when she died in 1641.

On February 25, 1643, Dutch Governor William Kieft ordered an attack on the local Indians at Pavonia, beginning hostilities at the settlement. In September the Indians retaliated. The Van Vorst house and property were in the vicinity of the warfare. The house was set ablaze, and Ide Van Vorst, then thirteen years old, was kidnapped and taken to Tappan. Captain David Pieterz [also reported as John] De Vries of Staten Island, assisted by friendly Indians, ransomed Van Vorst and returned him to his family. His stepfather Jacob Stoffelsen had hired soldiers to protect the property. But on October 1, nine Indians chased Stoffelsen away, killed the soldiers, and burned the house with others in the area of Pavonia.

Another Indian raid in 1655 at Pavonia caused the family to abandon the house. Stoffelsen returned the following year and asked the New Amsterdam authorities if he could rebuild. A third house was constructed at what was now called Harsimus. It is said that Stoffelsen brought slaves to the Van Vorst farm. From a reported dispute between Stoffelsen and his stepson Ide Van Vorst about the taking of sheep for dinner and the gift to Stoffelsen of "a Negro," one learns that they shared a common flock of sheep on the Van Vorst property and the presence of enslaved Africans (Winfield 430).

On October 18, 1652, Ide Van Vorst married Hilletje Jans of Oldenburgh (Holstein). They had six children, including a son Cornelius Van Vorst, baptized on July 30, 1662, who married Fitje Gerritse Van Wagenen of Communipaw. Like other settlers at Ahasimus, Ide Van Vorst retreated from his home during the Indian attack. In 1655, he briefly stayed at New Amsterdam to wait out the hostilities. In October 1659, he sailed away from the Van Vorst settlement to safety across the Hudson River.

Stoffelsen died between 1665 and 1675, and the Van Vorst property was in dispute among the heirs of the families involved. According to Winfield, "[Ide Van Vorst] continued to reside at Ahasimus as a farmer accumulating wealth, which was to enable him to become the owner of not an inconsiderable part of the domains of Pauw" (430).

During the Revolutionary War, a detachment of British Calvary was quartered at the Van Vorst house, and Lt. Colonel Cornelius "Faddy" Van Vorst (1728-1818) eventually inherited the house. He was the fifth generation of the Van Vorst family.

The Van Vorst family continued in the area as independent settlers. They occupied Pavonia from its founding to the incorporation of Bergen. The Van Vorst descendants were the major property owners of Paulus Hook at the time of the formation of the Associates of the Jersey Company in 1804. The last family member to live in the house was John Van Vorst in the 1850s. During the Civil War, an eighth-generation descendent of Cornelius Van Vorst, named for his ancestor, became the mayor of Jersey City (1860-1862).

Later in the nineteenth century, the shoreline of Jersey City at present-day Henderson Street was filled in. The land reclamation then placed the Van Vorst house and/or foundation, once on the banks of the Hudson River, three blocks or half a mile in from the coast. In the 1960 property search for the site and foundation of the Van Vorst house built in 1647, the study claimed the house at 166-168 Fourth Street was "built about 1885 on the foundation of the Van Vorst House" (Haff). This seems not to be the house of the first Cornelius Van Vorst, who died in 1638, but one of the homes built by Stoffelsen and/or Ide Van Vorst.

From the turn of the twentieth century, the area of the Van Vorst homestead had changed. There was a meatpacking company in the vicinity and apartments on either side of the house. It was once described as a two-story, and partial three-story, house with gables and look-out windows. Additions, such as a front and back porch, were made to the house over the years. It also had been used as a Turkish bath, and its exterior walls were covered with red brick. The owners were not able to salvage the deteriorating colonial structure, and it was razed in 1967 as part of the Henderson Street Urban Renewal Plan.

One may conclude only that the site of an early residence of the Van Vorst family most likely was at Fourth and Marin Boulevard (Henderson Street), and regardless of the loss of his original homestead, the Van Vorst family have left their footprint throughout Jersey City.