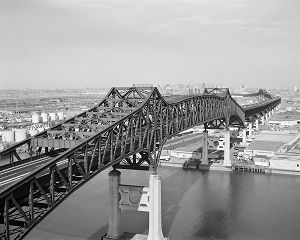 View of the Pulaski Skyway over the Passaic Riiver (1978)
Looking east towards Jersey City and New York City. 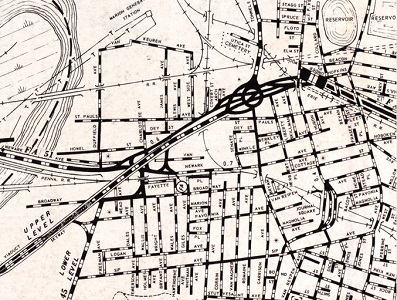 Part of the General Highway Map, Hudson County, NJ prepared by the New Jersey State Highway Department, Division of Planning in cooperation with the U.S. Department of Commerce, Bureau of Public Roads (1965) Sheet 4. 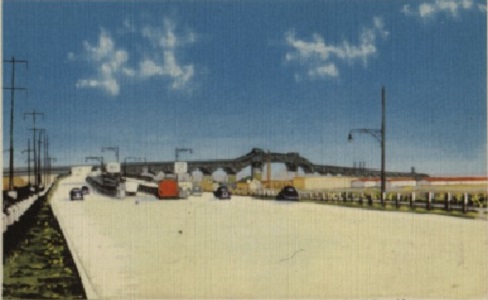 Color postcard view of the Pulaski Skyway circa 1950's.
Courtesy of R.F. Smith. 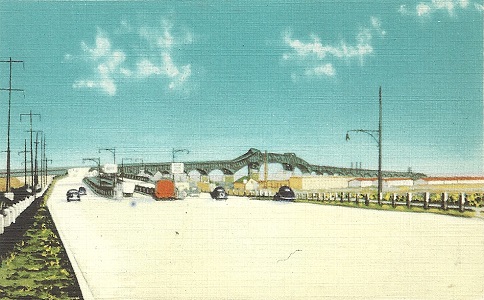 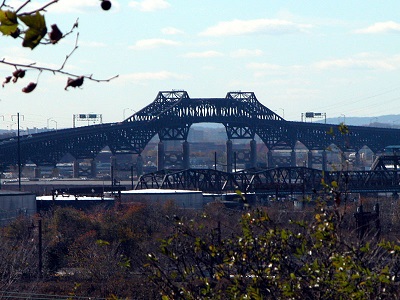 View of the Pulaski Skyway from the Jersey City Heights. 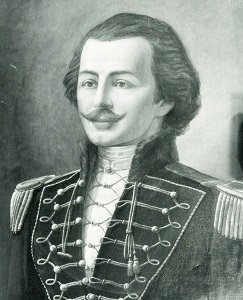 Upon its completion in 1932, the Pulaski Skyway was declared the "Most Beautiful Steel Structure" among long-span bridges by the American Institute of Steel Construction. On its sixtieth anniversary, the bridge drew praise as "a black steel necklace draped over the industrial meadows" (New York Times 10 October 1993). It again became a local celebrity when it appeared with the opening credits of the popular New Jersey-based TV program The Sopranos (1999-2007). A $1 billion rehabilitation project of the bridge connecting Jersey City and Newark was completed in 2018.

Costing approximately $20 million, the riveted construction bridge with cantilevered Pratt trusses atop concrete columns was the most expensive bridge of its day. Danish-born engineer Sigvald Johannesson designed the four-lane 88,461-ton skyway, selecting a truss design over the suspension bridge concept chosen for the George Washington Bridge and Golden Gate Bridge in the 1930s. At 3.5 miles long, the elevated roadway spans over the Meadowlands, peaks at 135-feet over the Hackensack and Passaic rivers, and crosses over Kearny's industrial sites and the NJ Turnpike. It begins at Jersey City with ramps to Newark and Kearny.

The construction of the Pulaski Skyway began as part of a larger $40 million, 13.2-mile-long Route 1 Extension project in the 1920s. The movement of troops and war materials between the Port of New York and New Jersey railroad yards during World War I demonstrated the need for new highways between the two areas. After the war, the New Jersey State Highway Department (NJDOT) drew up a master plan for the extension of Route 1 from Elizabeth, through Newark and Jersey City, to the proposed Holland Tunnel at downtown Manhattan.

Johannesson and Frederick Lavis, former railroad engineers and veterans of the Hudson and Manhattan Railroad project, began to work on the roadway in 1923. It was referred to as the "Diagonal Highway," as it was originally designed to cross diagonally the New Jersey Meadowlands with a "high-level, bridge-causeway complex." The following description captures its eventual design: "The two 550-foot-long main spans consist of cantilever steel (Pratt) trusses that support flanking 350-foot-long suspended spans. The land sections of the structure consist of 118 cantilever steel deck truss spans ranging from about 175 to 350 feet in length" ("Pulaski Skyway Historic Overview," 3). The 135-foot clearance above high tide met the requirement for the passage of warships underneath the bridge.

According to "1-9 Pulaski Skyway Historic Overview," the construction of the proposed elevated highway had implications for Jersey City's future development, thereby requiring the approval of its Mayor Frank Hague: "The highway was to cross the high ridge (part of the New Jersey Palisades) before descending to the Holland Tunnel. Connections were to be provided with Tonnele Avenue (US 1 and US 9), which was to be the primary route to the then-proposed George Washington Bridge. To avoid an open cut through Jersey City – something that the Erie and Pennsylvania railroads had already done to separate the city – the state highway department proposed a subterranean route that lessened the grade over the ridge. The highway was located alongside the Erie Cut and topped by a roadway. The adopted route, which curved north towards US 1, provided good connections to the local street system" (2).

The project as described did meet Hague's approval on several counts. The roadway was a state-financed project. It would provide much-needed employment to his constituents during the lean years of the Depression. And its approaches to. both Hudson (now Kennedy) Boulevard and Tonnele Avenue linked Hudson County's communities and gave access to the Marion section of Jersey City and South Kearny.

Construction of the skyway began in 1930 and took two years to complete. There were fifteen fatalities associated with the construction, including a murder resulting from a labor dispute over wages for union workers. It allowed Hague to use police force to terminate a labor strike affecting progress on the bridge.

Count Casimir Pulaski (1745-1779)
The bridge opened to vehicular traffic at 8:00 a.m. on Thanksgiving, November 24, 1932. It was later dedicated on October 11, 1933, on the anniversary of the death of General Casimir Pulaski.  Mayor Hague gave the welcoming address to 20,000 attendees at the dedication ceremony held at Lincoln Memorial Park Athletic Field from which the spectators had a wide-angle view of the viaduct over the marshlands. Governor A. Harry Moore, who was responsible for the executive order to rename the bridge, gave one of the dedication speeches

General Pulaski, the namesake for the bridge, died aboard the colonial gunboat Wasp two days after being severely wounded fighting the British at the Battle (Siege) of Savannah, GA (October 9, 1779).  A bas relief portrait for Pulaski by John Sheba of Irvington, NJ, is at the Jersey City approach of the skyway. Several New Jersey communities, like Bayonne, Newark, Carteret, and Little Egg Harbor, have named streets after him. In 2009, the United States conferred honorary US citizenship on General Pulaski, one of only seven to receive that distinction.

The Polish-born hero of the American Revolutionary War, Pulaski was known as the "Father of the American Cavalry."  While living in exile in Paris from his home country, he was recruited for the American forces by Benjamin Franklin and Marquis de Lafayette. General George Washington bestowed the rank of brigadier general to Pulaski in recognition of his leadership at the Battle of Brandywine (September 11, 1777), where he saved Washington's life.  It is often reported that Pulaski once wrote to Washington, "I came here, where freedom is being defended, to serve it, and to live and die for it."

The Pulaski Skyway became a popular truck route between Jersey City and Newark--but not without unintended consequences. The heavily utilized roadway brought congestion that affected the traffic pattern between New York and Newark (Liberty) Airport. State highway officials banned trucks from the roadway and rerouted them onto Communipaw Avenue, which became Truck US 1-US 9. In 1956, relief came with the newly constructed New Jersey Turnpike-Newark Bay Extension (1-78) as an alternate truck route to Jersey City and New York.

Safety issues also plagued the new viaduct. The number of fatalities gave way to its popular designation as "death highway" and even "suicide lane." The NJDOT website reports the dimensions of the Skyway that contributed to the problem: "The typical roadway section of the Skyway consists of two 11-foot lanes with no shoulders in both directions. There is a center median barrier, and two-foot safety walks along both outer lanes." When constructed, it had a center "breakdown lane" for disabled vehicles and no shoulder. Fearful drivers sped along the highway for a fast exit. Due to the increasing number of head-on accidents, a concrete median, or "Jersey barrier," was added to the center lane.

While the narrow roadbed was suitable for the railroad industry, the design left something to be desired during the automobile era of increasingly larger vehicles. In recent years, critics have also claimed that the bridge's decking is outdated and rapidly deteriorating, although the black steel structure mounted on concrete beams is reportedly secure for the more than 85,000 vehicles that cross the Skyway daily.

In 1983, the NJDOT received a $15.2 million federal grant for Skyway's first major rehabilitation to repair structural deficiencies. The NJDOT reportedly spends approximately $10 million annually on repairs to the concrete railings, deck, and structural steel. Moreover, it had long been debated whether to rehabilitate the bridge or replace it. Neither is inexpensive.

In January 2013, the Department of Transportation announced its remediation for the 80-year old Skyway. After the 2014 Super Bowl at NJ's MetLife Stadium, the steel behemoth of Hudson County underwent repairs for $355 million. During its renovation, the northbound lanes that travel east to New York were repaired while the southbound lanes were opened for two-way traffic. The pattern was reversed to repair the southbound lanes. Commuters headed for New York temporarily used alternate routes such as the Lincoln Tunnel and the George Washington Bridge. Completed in 2018, the renovation project has preserved the iconic Skyway significant for its design and traffic connections.