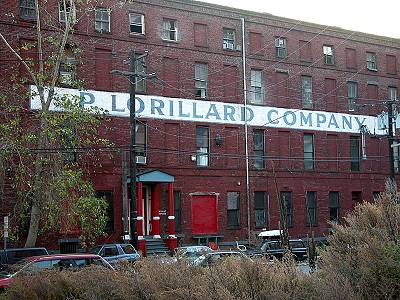 P. Lorillard and Company owned the warehouse at 111 First Street for some 85 years during the heyday of Jersey City's industrial era. At the end of the nineteenth century, it was one of the leading recognized brand-name manufacturers in America, one of the oldest tobacco-product manufacturers, and the nation's largest tobacco manufacturer. It became synonymous with the production of all manner of tobacco including snuff, plug, chewing and smoking tobacco, numbering over 160 brands. In 1883, the company reported sales of over $10 million a year in domestic and foreign trade from the production of over 25 million pounds of tobacco products.

Lorillard developed mastery in the category of advertising. It paid farmers to allow painted signs on the sides of barns, included trade cards in their packaging, and offered premiums for other products. Lorillard may also be responsible for using the "cigar store Indian" to promote the sale of tobacco as early as 1789 (James 16). Kent cigarettes were named for Herbert A. Kent, a board chairman and former president, who promoted the "Old Gold" brand of cigarettes. The "Old Gold" name in colored brick once appeared on the circular chimney within the courtyard of the former Lorillard facility.

The company's founder was Pierre Lorillard, a French Huguenot, who started making snuff in the Bronx, New York City, in 1760. The snuff factory site today is part of the New York Botanical Garden. Lorillard's sons Peter and George took over the business, setting the pattern for long-term family involvement in the company. It was incorporated in 1891.

In the early 1870s, the Lorillard Company moved to 111 First Street and manufactured tobacco products and snuff. It took over a Greek Revival brick building that was constructed in 1866 for one of the nation's first conglomerates, the American Screw Company, which fronted on Washington Street. It soon became part of the growing industrial complex in Jersey City. In 1868 Charles Siedler, late a Jersey City mayor (1876-1878), was a partner with the company.

Rick James, in his historic preservation nominating report for Jersey City's "warehouse district," remarks that Siedler most likely led his partners to locate Lorillard in Jersey City. Here, the company could avail itself of several advantages: the Pennsylvania Railroad and Harsimus Yards for product distribution; a newly-arrived immigrant labor supply; nearby port location for the importing of spices to flavor various tobacco brands; and a municipal water supply system for safety measures. Fire prevention was of the utmost importance to Lorillard in safeguarding the firm's highly combustible products. Its manufacturing plants installed the latest automatic sprinkler system of the time and maintained a detail of firefighters (15-17).

Among the company's 4,000 workers in 1884 were school-aged boys and girls. Since Jersey City lacked a free night school, in 1884, Lorillard began an evening school for its workers to comply with New Jersey's compulsory school law for those younger than sixteen. Located in the library of Booraem Hall on Newark Avenue, the school was not far from the factory. It offered adult employees a free library managed by Dr. Leonard S. Gordon, Lorillard's chief chemist and physician, who helped establish the Jersey City Free Public Library (James 17). Lorillard also offered sewing classes and a dispensary for its employees.

The Lorillard Company prided itself on its hiring practices and fair treatment of its African-American workers. In its history is a story about Peter Ray (1800-1882), a life-long employee. He started working as an eleven-year-old errand boy in New York City, rose to the position of foreman, and was promoted to general superintendent at the large Jersey City facility (Peterson 327).

In 1887, Lorillard constructed an annex between First and Second streets and maintained its corporate offices at 114 Water Street in New York City.

By 1910, Lorillard became part of the American Tobacco Company controlled by James Buchanan Duke (1856-1925) of Greensboro NC. In 1884, Duke had acquired the license for an automated cigarette-rolling machine from its developer James A. Bonsack of the Bonsack Machine Company. Duke also consolidated the tobacco industry into a consortium under the American Tobacco Co. name, soon called the "tobacco trust." Lorillard, however, retained its name. It built a new factory on the Thompson estate in the Jersey City's Marion section on 170 city lots for the employment of 4,000-to-5,000 workers. The six-story, fireproof steel and brick structure was located in the proximity of the Pennsylvania, Lackawanna, Susquehanna, and Erie railroads for nationwide shipment of its products.

Lorillard became an independent company again. It operated its "plug" factory at 111 First Street to about 1919 and its cigar factory at 104 First Street to about 1928; the latter building was destroyed by fire, circa 1990. In 1905, the warehouse was taken over by the Butler Corporation, a distributor to independent variety stores. In 1928, the main Lorillard facility was taken over by J.R. Reynolds, the manufacturers of "Camel" cigarettes. By 2010, Lorillard was a 250-year old tobacco company.

Lorillard moved its manufacturing operation from Jersey City to Greensboro, NC, in 1956. Its Jersey City facilities were occupied by a variety of commercial enterprises like storage, retail stores, and factories.

Between 1989 and 2005, the block-long warehouse at 111 First Street showed promise as an arts center for the "Historic Warehouse District" project. The former tobacco building offered artists readapted space for residences, interior space with rental studios, a commercial gallery, and the (Charles) Chamot Gallery (1996-2005). The project was short-lived as new property development at the location became more economically attractive. The warehouse was razed in 2007 and groundbreaking for a residential tower took place on the site in 2013.