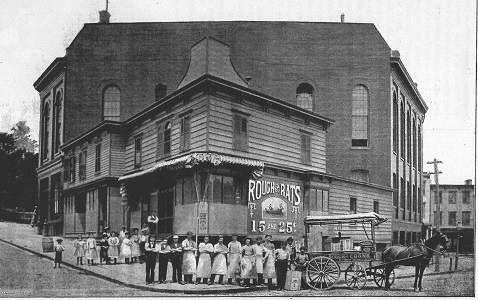 Library Hall can be seen just behind E.S. Wells' old Rough on Rats laboratory formerly located on the northwest corner of Summit Avenue and Grand Street in this photograph (circa 1890).
Source: McLean, History of Jersey City, NJ (1895) 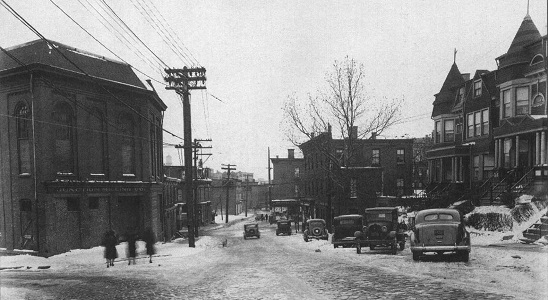 In this photograph (circa 1940?), looking southeast along
Summit Avenue near the intersection of
Cornelison Avenue, Library Hall can be seen on the left.
Courtesy, Jersey City Free Public Library

Grand Street and Intersection of Summit Avenue and Ivy Place

The former Library Hall on Grand Street is one of Jersey City's many restoration projects that carry forward a piece of the community's history.

The five-story red brick structure was a multipurpose building constructed for the Township of Bergen in 1865-66 and was used by Bergen City, 1868-1870. It was a time of transition for the nation just after the Civil War and five years before the incorporation of the City of Jersey City in 1870. The Township's Bergen Library Association intended the building to be a civic center boasting the first public lending library, as the name conveyed, a town hall and jail, and a meeting place for community organizations. According to reporter Ricardo Kaulessar, "by 1871, the library portion of the facility was discontinued due to waning public interest." It reportedly had 14,000 books.

The triangular-shaped building continued to be used by clubs and organizations such as the Lincoln Association of Jersey City, which held its first Lincoln Ball on Christmas Eve in 1867 at the site. Church groups such as the former St. John's Episcopal Church rented the facility, and it was a popular venue for social events and political rallies.

With the formation of the municipality of Jersey City in 1870 and by the World War I era, the building lost its original purposes and was either vacant or used commercially. In 1891 the Bergen Hall Association sold the building to Dominicus Wegman. The Fourth Precinct of the Jersey City Police Department occupied the building during the 1890s. Kaulessar notes that afterward, "it was known as Phoenix Hall, a rally spot for those sympathetic to the Irish Revolution that occurred at the beginning of the 20th century." In 1917, the Junction Milling Company, opposite the building, used it for storage. In December of 1945, Milton Michael of Michael's Furniture bought the building as a salesroom and warehouse, and then, at some future date, it became the National Rug and Carpet Store.

In 2005, Larry Brush of Jersey City purchased the building and Minervini-Vandermark Architecture of Hoboken began the restoration of the sturdy mid-nineteenth century building in the Morris Canal Development area. The original three-story Romanesque windows direct one's eyes to the gray brick-and-glass designed penthouses added as an extension to the roof. It has fourteen condominium units: "Although the decision to remove the mansard roof and add the penthouse is debatable from a pure preservation perspective, the original footprint and walls remain effectively tying the nineteenth to the twenty-first centuries on the significant corner" (Harris and Yost 43).