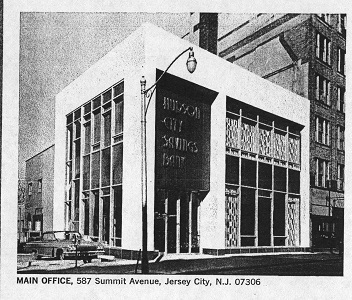 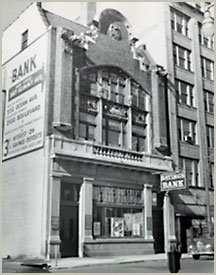 Hudson City Savings Bank took its name from the community of Hudson City, an independent municipality in Hudson County from 1855 to 1870. Significant to both the bank and city was the leadership of Garret D. Van Reipen. He was the second mayor of Hudson City and the bank's first president.

Hudson City was initially chartered by the New Jersey Legislature in April 1852 as the Town of Hudson and as the City of Hudson in April 1855. The community of approximately 3,000, popularly referred to as Jersey City Heights, was located along the Palisades of New Jersey with Hoboken to the east and Meadowlands to the west. The transportation hub at Five Corners took travelers onto New York City or Hoboken and an attractive financial location for its day.

Except for a five-year presidency by Benjamin F. Sawyer, Van Reipen was the bank president and treasurer from its founding until 1899. Born in Bergen Township on January 26, 1826, he was a descendant of Dutch immigrants who settled at Communipaw in the 1650s. During the Civil War, Van Reipen was a Lieutenant of Company A, Second Regiment and later promoted to Captain "for bravery in the field." After the war, he became paymaster of the Fourth Regiment, N.G.N.J.

A Democrat, Van Reipen won election to the state legislature (1863-1864), was a member of the Jersey City Board of Finance (1874-1875), elected annually president of the County Board for the Equalization of Taxes from 1873 to 1899, and was a director of the Hudson County National Bank. Except for a five-year presidency by Benjamin F. Sawyer, Van Reipen was the bank president and treasurer from its founding until 1899, when he died at his home at 553 Summit Avenue on August 1st.

Hudson City Savings Bank investors recognized the financial potential in the growing Hudson City. By 1865, it had 13,151 inhabitants from a population of 3,322 ten years earlier. Incorporated by the State Legislature on March 27, 1868, the bank opened its office at 659 Newark Avenue in the Five Corners area. In 1922, the headquarters of Hudson City Savings moved to 587 Summit Avenue and was modernized in 1963.

During the twentieth century, Hudson City expanded its financial operations throughout New Jersey. In 1928, the bank opened its first branch at 2530 Hudson (now Kennedy) Boulevard at the corner of Jewett Avenue. The neo-classical limestone building in Art Deco-style features terra cotta bas reliefs, polychromatic brick, and steel casement windows. The Bayview branch at 532 Ocean Avenue opened in 1947. With new bank branches outside of Jersey City, Hudson City Savings built its headquarters and main office in Paramus, NJ, in 1982.

Begun as a mutual savings bank, Hudson City Savings was managed by a board of managers. In 1999 it reorganized as a stock savings bank, a wholly-owned subsidiary of Hudson City Bancorp, Inc., listed on the NASDAQ and the largest savings and loan bank in the US.

In 2015, Hudson City Savings was acquired by M & T Bank Corporation that was founded as Manufacturers and Traders Trust Company in Buffalo, NY.