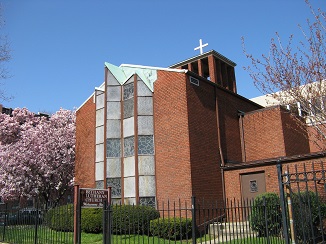 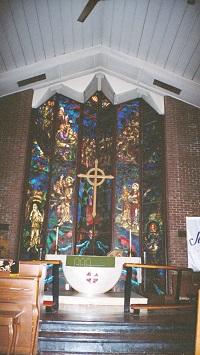 Bethany Evangelical Lutheran Church is at the southeast corner of the New Jersey City University campus on Kennedy Boulevard. The modified Swedish castle-style church is the only property to share space with the university along Kennedy Boulevard between Audubon and Culver avenues.

The Bethany Evangelical Lutheran Church was founded when the Swedish Lutheran Ebenezer Church and the Swedish Lutheran Bethel Church joined together on July 15, 1943. The beginnings for the new congregation dates back to 1884 when a Brooklyn, NY, minister came to Jersey City to hold services for a number of newly arrived Swedish immigrants. The Swedish Lutherans first met in a private home at 400 Tonnelle Avenue and then in the basement of St. Paul's German Lutheran Church. In 1890, they founded the Ebenezer Church and built a church on Palisade Avenue. It relocated across the street to make way for the construction of Dickinson High School in 1906. A church elder reported remembrances of the destruction of the church's stained glass windows from the Black Tom explosion in 1916. The congregation remained at Palisade Avenue until 1942 when the church was razed for public housing.

In 1923, in the Greenville section of Jersey City, the Bethel Church was founded for Swedish speaking Finn immigrants. It was located on Armstrong Avenue between Bergen and Jackson avenues. In 1943, the two churches had a common pastor. This development led to a decision to merge the congregations and for religious services to be held in the Greenville section where many of the church members lived. For a time, they met at the Seventh Day Adventist Church on Stegman Street. Property was purchased at the corner of Bergen and Grant avenues for a new church; however, the plan was derailed when the prioritized use of building materials for the war disrupted the project.

The congregation almost disbanded between 1945 and 1950, having lost its temporary meeting place on Bergen Avenue and its pastor. When a new pastor, the Rev. H. Allison Linne, arrived in 1950, the congregation was revitalized. It enjoyed a growth spurt growing from 170 to over 300 members of different ethnic groups. The Bergen Avenue property was sold, and its present site on the corner of Kennedy (then Hudson) Boulevard was purchased. The cornerstone was laid in 1951, and the church was dedicated the following year.

Upon entering the small chapel-like Bethany church, one is drawn to the stunning stained glass "Resurrection" window that rises from the floor to the ceiling. The luminous five glass panels in an open fan-like design depict scenes from the New Testament. It was designed and installed by the famed J & R Lamb Studios of Clifton, NJ, founded in 1857, and one of the oldest firms working in this craft. The Grace Lutheran Church at 982 Summit Avenue and Evangelismos Greek Orthodox Church at 661 Montgomery Street also have stained glass windows by the Lamb Studio. The bell in the church tower came from the ferry slip at Cortlandt Street in New York City; it was donated by a construction company that dismantled the bell.

Today, Bethany Church sponsors outreach programs, such as Headstart, a summer bible program for children, and Narcotics Anonymous, to serve the community.