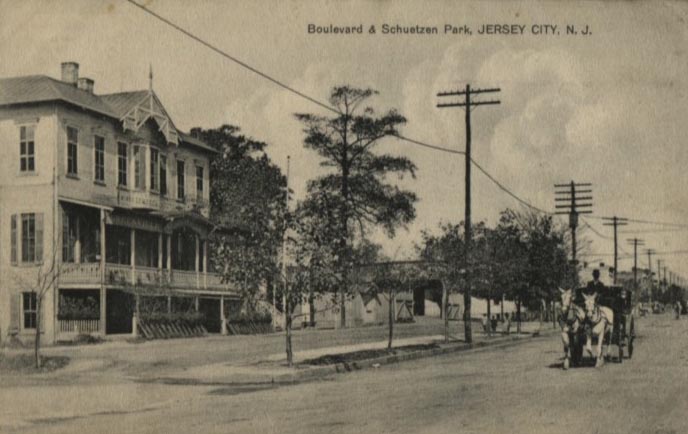 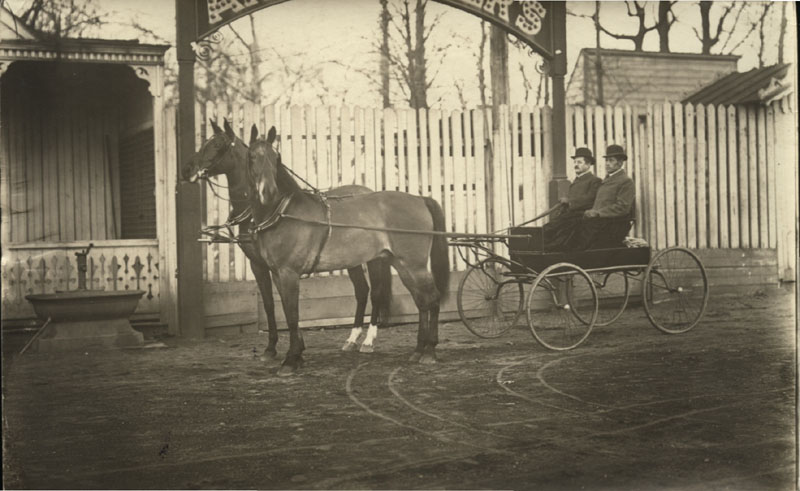 An early twentieth century photograph outside of a side entrance
to the park.
Photo: W. Armbruster
Courtesy, Jersey City Free Public Library

Driving along Kennedy Boulevard, between Gates and Seaview Avenues, it is hard to imagine that the city block to the west was once Ambruster's Greenville Schuetzen Park, a thriving amusement area. It became the site for Republic Container for many years and is now occupied by Walgreens.

The amusement park property was purchased in 1875 by the United Shooting Society for a rifle range. Charles Armbruster and other family members bought the grounds in 1881. They owned several other Schuetzen parks popular with German immigrants living in the Greenville section of Jersey City and New York.

Regarded as an innovator in the amusement park industry, Armbruster was known as a "pioneer in the schuetzen era" (Weidemann). He extended the use of his Schuetzen Park in Greenville by employing the use of naphtha for illumination. It permitted visitors to stay at the park into the evening.  Armbruster also expanded the park to have a capacity of five thousand visitors.

For nearly fifty years, Schuetzen Park was noted for its social and athletic events. Fine dinner and dancing were available in a grand ballroom, especially German cuisine. For some years, the traditional Schwaben Fest that symbolized the harvest of fruits and vegetables was held on Labor Day and the following Tuesday.

Clubs and organizations rented spaces in the park for gatherings. Some of the churches and organizations that held picnics in the park were St. Aloysius, St. Peter's, Holy Rosary, St. Paul's R.C. Church, the Royal Order of Moose, and Jersey City Lodge of Elks, No. 211. Company outings were held there by Mueller's, Colgate's, Tide Water, and Lembeck & Betz Brewery. Visitors enjoyed the gazebos for dancing, a children's playground, and a tree-covered picnic grove. National and international revolver, pistol, and rifle matches, equestrian races, political outings, and an array of sports activities. were held.

The Park served as the home of the Greenville Camera Club. William Armbruster (1865-1955), Charles Armbruster's brother, was a pictorial photographer and club member. His photographs captured the park and the people and environs of Greenville and Bayonne. One of Armbruster's images, to the left, shows Police Inspector Archibald and Captain Cox sitting in a horse and carriage in front of Schuetzen Park

William Ambruster's photographs, such as "Morris Canal-Greenville" and "The Smithy," are included in the Jersey City Museum collection.