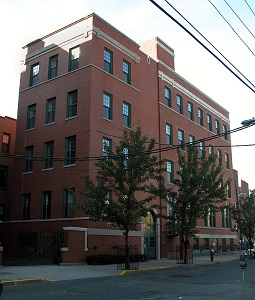 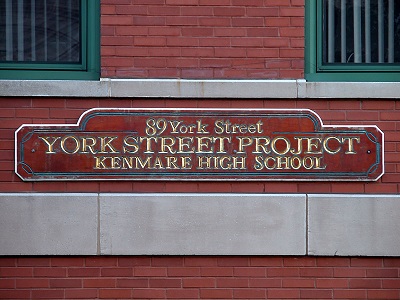 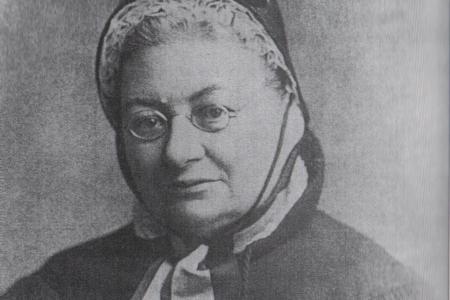 In 1989, the Congregation of the Sisters of St. Joseph of Peace founded the York Street Project in a downtown Jersey City townhouse at 78 Grand Street, now a residence for the working sisters.

The elevated Italianate-style row house was built by Jacob J. Banta, in 1857, whose family emigrated from Holland in 1659. He grew up in Jersey City, worked as a carpenter, and became a builder. Charles Wakeman first purchased the handsome three-story house of soft reddish-brown sandstone. The exterior has heavy stoop balustrades, iron handrails, and noticeable windows and door trim. A double parlor that was common to the architectural design graced the interior. New York cabinet maker John Henry Belter made the furniture of laminated and carved wood.

Mother Cusack Francis Clare, known as the "Nun of Kenmare," founded the Sisters of St. Joseph of Peace in Nottingham, England, in 1884. There she had been an activist for Irish famine relief. Cusack came to America to help poor immigrants, especially women. She first approached the diocese of New York to establish her work, but she was rejected because of her radical reform ideas. Cusack later won the approval of Bishop Winand M. Wigger of the diocese of Newark to settle in Jersey City. In 1885, she purchased the Grand Street house to begin her social work and a convent at 235 Grove Street for the sisters.

According to Cusack's biographers, "[her] aim was to establish a chain of residences for immigrant girls where they might find help in getting jobs and protection from exploitation and unhealthy living conditions. She also proposed setting up a training school for the blind . . ." (McQuaide and Richardson 118). Local historian Barbara Petrick adds that "The Sisters . . . would meet immigrant women at Castle Garden and escort them to the house in Jersey City. An employment bureau, a training program, a children's day-care service, and a rest home were established for the women. Cusack was successful in attracting financial support and other women to join the religious community" (Petrick 221).

Cusack soon encountered conflict with the Roman Catholic Church over her views on social order, education, and working women. Believing that her published views threatened the efforts of her congregation, Cusack returned to England in 1891. But her work, and her order of sisters, continued toward her goals to improve education, housing, and childcare for the poor.

The not-for-profit York Street Project, sponsored by the Sisters of St. Joseph of Peace, receives funding from the state and federal governments, corporations, and individuals. Under its aegis are several nondenominational community programs. During a 1980s renovation of the York Street Project properties, some of their programs were relocated.

The St. Joseph's Home, founded in 1886 and incorporated in 1905 for poor and abused girls, is at 89-91 York Street. It continues its mission to provide housing for homeless women and children. The Nurturing Place at 81 York Street, a five-story brick building constructed in 1890, sponsors an accredited early childhood program.

The Kenmare High School is an accredited secondary school that assists women between the ages of seventeen to twenty-seven to obtain a diploma and job training. It opened at St. Boniface R.C. parish in Jersey City in 1982 and is now at 89 York Street.

The sisters also expanded their network of the York Street Project to other social institutions in Jersey City. In 1987, they extended their ministry to St. Ann's Home for the Aged, now Peace Care St. Ann's,  at 198 Old Bergen Avenue. The Sisters of Charity of Providence from Montreal, Canada, incorporated the home in 1911. Their ministry now includes the Cusack Care Center (formerly St. Joseph's Home for the Blind) at 537 Pavonia Avenue and St. Joseph's School for the Blind at 253 Baldwin Avenue, dating back to 1891.

St. Joseph's School for the Blind is the only school for the blind in New Jersey. It had been located on Baldwin Avenue from 1927 to 2006 when it moved to the three-acre site at 761 Summit Avenue. A secular institution, the school receives funding from a student's respective school district. The nearby Concordia House provides housing for students residing too far to commute.

Collectively, the York Street Project facilities give care to the elderly, visually impaired and blind students, and those with multiple disabilities from infancy to age 21.