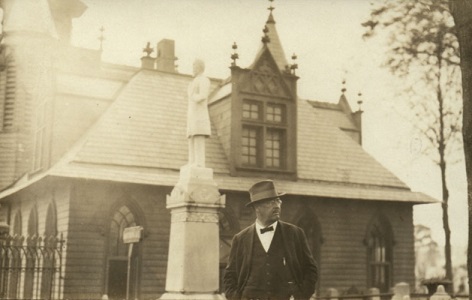 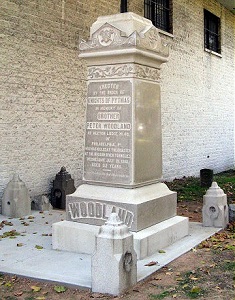 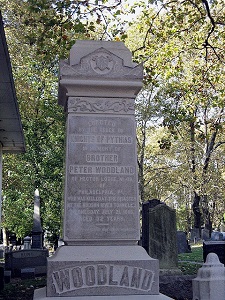 On October 26, 2013, the Order of Knights of Pythias of New York rededicated the monument to Peter Woodland, a Pythian and superintendent of Holland Tunnel operations, buried in Bayview-New York Bay Cemetery. Woodward died trying to save the lives of his fellow workers.

On July 21, 1880, Woodland, was working 60-feet below the Holland River in a pressurized compartment when he noticed gushing water coming through the brick tunnel. The grand archway of the working shaft at the foot of 15th Street, Jersey City, (Pier No. 9) had collapsed at approximately 4:30 a.m. Woodland guided eight men to the safety of the air chamber and closed the door. Woodland stayed behind in the chamber with nineteen other workers. The miners, called "sandhogs," were trapped in what was known as a "blowout" (escaping air) from the opening. Water and silt rose to drown Woodland and the nineteen men.

As early as 1871, Col. DeWitt C. Haskins, president of the Hudson Tunnel Railroad Company, attempted the construction of a Hudson River tunnel, The tragic event of 1880 temporarily disbanded the project. TIn 1908, William Gibbs McAdoo in completed the tunned as the Hudson and Manhattan Railroad, which was called the Hudson Tubes for many years. In 1962, the Port Authority of New York and New Jersey acquired the  railroad and train tunnels as part of  the PATH transportation system.

The Knights of Pythias raised funds for Woodland's burial and monument. They erected a statue of Woodland atop the engraved stone that reads: "Erected by the Order of Knights of Pythias in memory of Brother Peter Woodland, of Hector Lodge No. 49, of Philadelphia, Pa., who was killed at the disaster at the Hudson River Tunnel, Wednesday, July 21, 1880, aged 32 years. He sacrificed his life that others might live." Woodland lived at 158 Pavonia Avenue and left behind a wife and daughter.

Over the years, the memorial was subject to vandalism and neglect. In 2009, a group of New York Pythians organized the Woodland Monument Refurbishment Fund for the memorial's restoration. They raised money from donations and the sale of commemorative coins. In the first phase of the renovation, the monument was remounted on a concrete platform. In the next phase, the restored statue of Woodland will be placed on the platform next to the monument to avert further damage.

Woodland's heroism was also memorialized by the Massachusetts Knights of Pythias in Lynn, MA, with the naming of the Peter Woodland Lodge #72.