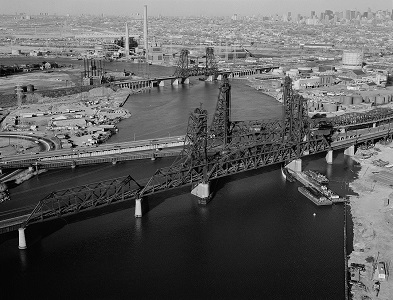 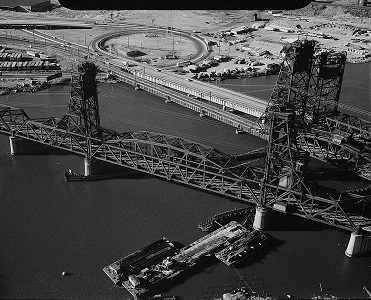 After years of study and debate, the New Jersey Department of Transportation (NJDOT) has decided to replace the Wittpenn Bridge rather than renovate the aging thoroughfare. Known as the Wittpenn Bridge Replacement Project, the NJDOT is constructing a new bridge about 200-feet north of the existing one for improved accessibility and safety. It will feature an orthotropic deck that is raised on the roadway for the passage of ships below and is expected to last for 100 years..

The project that will cost approximately $500 million has partial funding from the Port Authority of New York and New Jersey. Bridge construction is under the supervision of AmerCom Corporation and is expected to open in 2021. It will retain its name and remedy some of the limitations with the Wittpenn Bridge's original design. The new bridge, between Jersey City and Kearny, will rise 70 feet over the Hackensack River, feature two 12-foot wide through lanes, 8-to-10-foot wide shoulders in each direction, 6-foot sidewalk along the eastbound roadway, and 8-foot concrete "Jersey" median barrier to separate opposing traffic. It will provide for pedestrians and bicycles.

Named for a Mayor
In 1929, Governor Morgan F. Larson, a Republican, appointed H. Otto Wittpenn to the New Jersey State Highway Commission on which he worked for the development of the Newark-Jersey City viaduct. During the same time, the New Jersey Department of Transportation (NJDOT) began working on a number of bridges to improve area transportation. One such bridge was that over the Hackensack River that began construction in 1927. It replaced the Newark Turnpike bridge that had a dangerous S-curve access from Jersey City. It opened on November 5, 1930, with Wittpenn attending the ceremony. A year after his death in 1931, the former Jersey City mayor was honored with the naming of the bridge.

The steel superstructure, with piers and roadway deck of reinforced concrete, is a vertical lift truss bridge for highway traffic that cost $3 million. The bridge facilitates traffic from NJ Route 7 across the Hackensack River between Jersey City and Kearny at the renovated intersection of US 1 and US 9. It is one of the most heavily trafficked in the state--50,000 vehicles per day.

The bridge is the design of the engineering firm of Harrington, Howard & Ash (now HNTB) founded in 1914 and the Danish-born civil engineer Sigvald Johannesson. The principals of the firm, John L. Harrington, Ernest E. Howard and Louis R. Ash, were noted for the design of movable (lift) bridges and considered the successors to the work of the acclaimed civil engineer John A.L. Waddell (1854-1938). Waddell's principle of functional efficiency in design is explained in his belief that a bridge "must be fitted for the work it is to do. . . " (quoted in Modica, p. 32) When faced with the criticism that vertical lift bridges were unsightly and even ugly, he responded that "some of them undoubtedly are ugly, but others, at least to an engineer's eye, are fine looking, being bold, massive, and evidently well-fitted for their purpose" (quoted in Modica).

Johannesson (1877-1953), having experience in the design of tunnels in London, was in the employ of the NJ Highway Department (now NJDOT) and joined the design team. Among his local area projects are the North River Tunnels for Amtrak and NJ Transit and the Hudson and Manhattan Railroad Tunnels. He also supervised the design of the Pulaski Highway and authored the recognized work Highway Economics (1931).

The Wittpenn Bridge is considered part of the Hackensack River Vertical List Bridges Historic District--one of four vertical lift bridges over the Hackensack River between Jersey City and Kearny. It is also one of the Triple Hack Bridges built in 1930. The other two are the Pennsylvania Railroad Harsimus Bridge (now the CSX/Norfolk Southern Railroad) and the Pennsylvania Railroad's passenger bridge (now PATH).

The 2,169-foot long and 40-foot wide Wittpenn Bridge features a four 10-lane vertical lift span of 83 feet that allows a 100-foot clearance over mean high water when open, but only 35 feet when closed, for ships between its 140-foot-tall towers. The original width of the bridge was altered with the removal of the two lines of trolley tracks in the 1950s. The raising of the lift takes 15 minutes.

In his essay on the Wittpenn Bridge, Glenn R. Modica explains the alterations to the Hackensack River channel for the bridge construction--an engineering feat for the project: ". . . the Army Corps of Engineers shifted the navigation channel from the west side of the river to a newly dredged 160-foot wide channel on the east side. To maintain a continuous navigation channel, the adjacent Pennsylvania Railroad freight bridge and Wittpenn Bridge were both built at the same 39 degree angle to the river so that their lift spans would align" (p. 31).

The Wittpenn Bridge will remain in use with views of the new construction until the completion of its replacement.