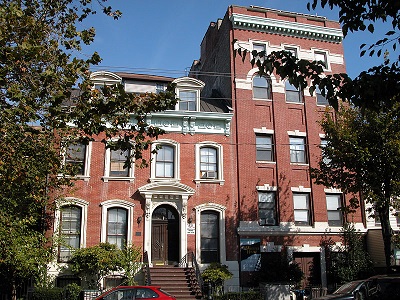 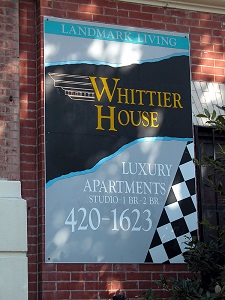 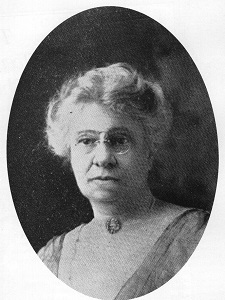 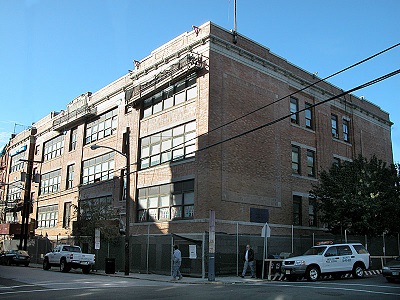 Two red-brick apartment properties,  among the private residences on Grand Street, were once Whittier House, a social settlement house founded by Cornelia Foster Bradford during the Progressive Era. Modeled closely on Chicago's Hull House social settlement, it served the immigrant poor of Jersey City from its beginnings in December 1893 through the Great Depression. The Boys and Girls Club of Jersey City traces its origins in part to Whittier House.

Bradford was born in New York in 1847 and educated at Houghton Seminary in Clinton, NY, and Olivet College in Michigan. Her interest in social reform was influenced by her father, Benjamin Franklin Bradford. A Methodist and Congregationalist church minister, the Rev. Bradford was a descendant of Governor William Bradford of Plymouth Colony and worked for abolitionism, prohibition, and women's rights. The Bradford family moved to Chester, NJ, in 1890.

In 1893, Cornelia Bradford visited Toynbee Hall and worked at Mansfield House in East London, England, two settlement houses offering assistance to poor urban residents. Upon her return to the United States, she stayed at Hull House in Chicago, the first settlement house in the United States founded by Jane Addams. After these experiences, Bradford began in Jersey City what would become the first of eighteen settlements in New Jersey.

The selection of Jersey City by Bradford came from her desire to work in a major city comparable to that of Chicago. She chose to locate in the First Ward of Jersey City where immigrant groups settled after their entry into America through Ellis Island. Traditionally known as Paulus Hook, the area was where the Associates of Jersey Company earlier planned commercial and industrial development to take advantage of the waterfront. However, not until after the Civil War did the area develop commercially from the combination of ferry and train services to Jersey City and New York. The immigrants, many of whom came from Italy, Ireland, Poland, Russia, Scotland, and Sweden, settled in the tenements and worked in adjacent factories, such as Colgate, Lorillard Tobacco, and Dixon Crucible.

The minister, Dr. John L. Scudder, pastor of the People's Palace on Grand Street in the Paulus Hook section (formerly the Old Tabernacle at Henderson and York Streets and later the First Congregational Church at Bergen Avenue and Boyd Street) permitted Bradford the use of the gymnasium and clubrooms in the basement to start the settlement. Bradford raised money and incorporated her settlement with the assistance of her brother, Armory H. Bradford, a minister in Montclair, NJ. She then moved to 174 Grand Street in 1894, naming the settlement after the poet and her friend John Greenleaf Whittier. The motto for the settlement is a quotation from one of his poems: "He serves thee best who loveth most/ His brothers and Thy own."

Bradford's purpose for the settlement house was to perform social work in the neighborhood and improve the living conditions. Whittier House soon became an incubator for numerous social reform initiatives by Bradford and her resident workers. Among the "firsts" in Jersey City that begun at the settlement house were: a free kindergarten, a women's club, a fresh-air program for children with a summer camp at Pomona, NY, a dental clinic, visiting nurse service, diet kitchen, and playground. It offered immigrants in the community a mothers' club, library, pawnshop, medical and dental dispensaries, lectures, and classes in stenography, sewing, dancing, and cooking. Unlike other charity organizations, Whittier House was supported by a minimal charge to its clients and voluntary contributions. An outgrowth of Whittier House was the founding of a Neighborhood Council for local residents to discuss their needs and community problems.

As its head resident, Bradford gathered other reformers for the founding of various state and county associations, such as the Child Protective League, the New Jersey Association of Neighborhood Workers, the Society for the Prevention of Cruelty to Children, the New Jersey State Bureau of Immigration, Legal Aid Society, New Jersey Consumers League, Jersey City Negro Welfare Association (1917), and the Hudson County Tuberculosis Association. The latter organization built the Laurel Hill Sanitarium, which was the forerunner of the Tuberculosis Hospital at Snake Hill (later Laurel Hill) and its successor the Pollak Hospital for Chest Diseases at Clifton Place. Through the New Jersey Consumers' League, Bradford investigated the glass-making industry in South Jersey to document the grueling work performed by children. It resulted in the Child Protection League and a comprehensive child labor bill (Swayze Bill). Bradford expanded her social services with the Whittier House Health Center at 123 Grand Street.

In 1903, Bradford began the New Jersey Association of Neighborhood Workers to unite New Jersey's settlement houses. It was a lobby organization for social legislation, and she was its president.

Among those who became residents were Louise Farrant, a Barnard College graduate and teacher of classics at Jersey City High School (Dickinson High School), and attorney Mary Philbrook, the settlement's legal aid advisor. Mary Buell Sayles, born in Illinois in 1878 and graduated from Smith College in 1900, became a resident at Whittier House, where she worked for two years on a fellowship from the College Settlements Association.

Sayles is noted for participating in numerous programs at Whittier House, but she is best remembered for her study of tenements in the working-class section of the First Ward. With the College Settlements Association, Sayles conducted research on "The Housing Conditions of Jersey City" that documented problems found in over two thousand apartments in the city. Her extensive investigation was published in the Annals of the American Academy of Political Sciences (1903).

In 1905 Bradford convinced Republican Mayor Mark Fagan to take responsibility for the kindergarten program and some of the medical care initiated at Whittier House. She also successfully appealed to the mayor to designate the property opposite the settlement as a playground rather than a saloon as had been intended.

Whittier House was an outstanding example of municipal reform during the Progressive Era.  According to historian Ella Handen, it was the only "classic" settlement in New Jersey as Bradford modeled it closely after Hull House. Its work in Jersey City attracted prominent visitors, such as Jane Addams of Hull House and J. Ramsey MacDonald, the first labor Prime Minister of Great Britain. Bradford lobbied in the legislature at Trenton for reforms like a ten-hour workday and a five-day workweek and the establishment of juvenile courts, parental homes, and county penitentiary. New Jersey Governor Edward I. Edwards, also born in Jersey City, appointed her to the New Jersey State Board of Children's Guardians.

In 1912, the Democrat reform mayor, H. Otto Wittpenn, appointed Bradford the first woman member of the Jersey City Board of Education. Among her interests while on the board was the construction of an elementary school in the First Ward (northeast corner of Washington and Sussex Streets). It was completed in 1916 and is Public School No. 16. A portrait of Bradford is displayed in the school, which was rededicated to Bradford in 1945. In 1926, she retired at age seventy-nine from Whittier House after thirty-two years of service but continued to support the settlement financially.

After Bradford's retirement, Whittier House discontinued its resident-worker operation and proceeded with mostly after-school programs for children and clubs for adults. During the Depression, the city took over its services. It became the Whittier House Division of the Jersey City Boys' Club with assistance from the Works Progress Administration. In 1924, the Whittier House Boys' Club became affiliated with the Boys' Club of America. Their work continued at the site until after a fire occurred in November 1981.

Today, the Whittier House properties have been renovated and contain nineteen apartments. The ornate cornices to the rooftop cupola that originally graced the buildings have been preserved.