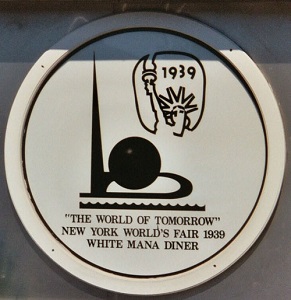 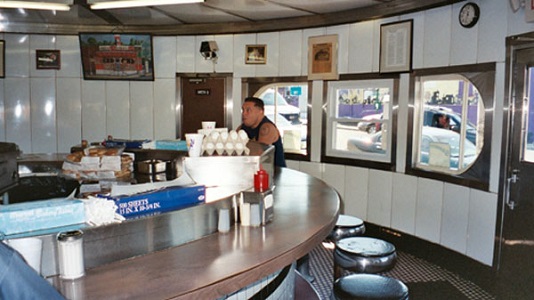 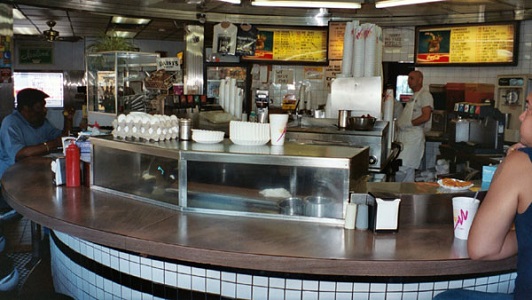 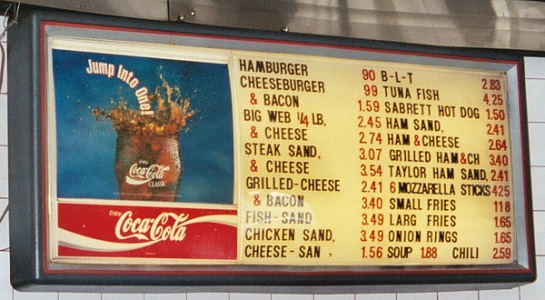 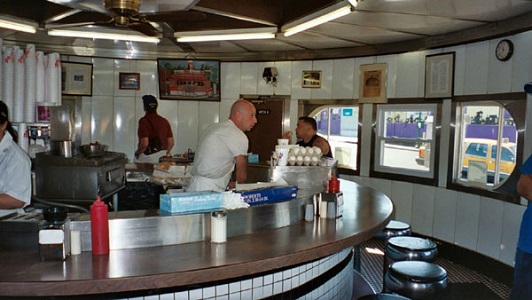 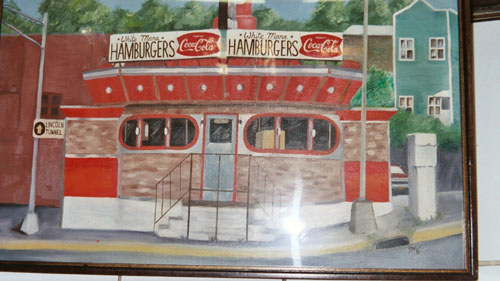 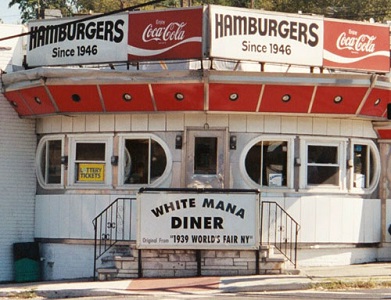 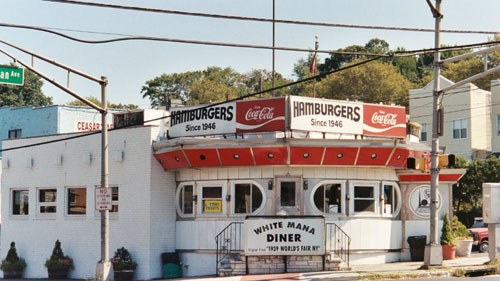 Along the well-trafficked stretch of Tonnele Avenue and the corner of Manhattan Avenue is a local landmark known for its unique fabrication and American fare of hamburgers, fries, and milkshakes. The familiar eatery to all who use the busy truck route is the White Mana Diner. It was promoted as the "diner of the future" at the 1939 New York World's Fair in Flushing Meadows, Queens, and as an "Introduction to Fast Food."

The exterior of the diner features a rounded facade with a red-flared parapet extending above the flat roof. It has white enamel with orange/red trim rather than the stainless steel commonly used in diner construction. Two identical signs "Hamburger since 1946" and the Coca Cola logo sit on the roof above the front entrance. The "White Mana DINER" placard is mounted on the railing along the front stair. The dining room extension appears to the side of the diner facing Tonnele Avenue.

Paramount Diners adopted the use of Formica, a brand of laminate invented in 1913, as an insulating product for its diner surfaces, such as countertops, tabletops and ceilings. According to Richard J.S. Gutman in American Diner, the product was practical, replacing other building materials, and had the familiar Art Deco designs and colors: "The sleekness of the surface . . . introduced a new diner aesthetic. . . . Tabletops featured Art Deco designs with stripes and circles of contrasting colors. The edges of the counter were inlaid with metal stripes" (117).

The interior features a distinctive geometric-patterned tiled floor, circular steel counter in white with blue trim, and chrome bar stools. It was "designed so the cook/server wouldn't have to walk more than three steps in any direction to cook a burger, draw a soda and serve a customer" (Krane). Its modern look conveys a sense of durability and ease of maintenance in a classic design.

Louis Bridges owned five "White Manna" diners in New Jersey. He purchased the diner of World's Fair fame and brought it to Jersey City. It opened on June 2, 1946, offering ten-cent hamburgers. The carhop service to five a.m., beginning in the 1950s, was discontinued in the 1980s. The White Mana Diner, however, remains open 24 hours a day, reportedly selling 3,000 hamburgers a week. The exterior of the diner was altered with brick construction and covered some of the original facade when a dining room was added to the circular grill area.

The current owner Mario Costa, born in Portugal, bought the diner for $80,000 in 1979 from Bridges’ brother Webster. He rented the diner to Costa but was going to raze the building. Costa had formed an attachment to the diner from working there. He swept the floor and cooked burgers to put himself through high school and Jersey City State College (now New Jersey City University). In 1996, Costa decided to sell the diner and lot for $500,000. When he found that the buyer intended to demolish the diner for a fast-food franchise, he went to court and negotiated for the repurchase of the business at additional cost.

After much speculation about the misspelling of manna in the name of the diner on its signs, Costa explains that the absence of the second n dates from the 1980s: "Our sign originally has two Ns . . . . Coca Cola used to service our signs, and one day they bought it back with one N. They misspelled it and it stuck" (quoted in Levin 48). Regardless of its spelling, the name has both biblical and historical references to the affordable food "mana" [sic] in a sanitary "white" establishment during the Depression.

On March 24, 1997, the Jersey City Historic Preservation Committee declared the diner a local landmark. The decision helps secure the preservation of the White Mana Diner and its signage from future developers and demolition.