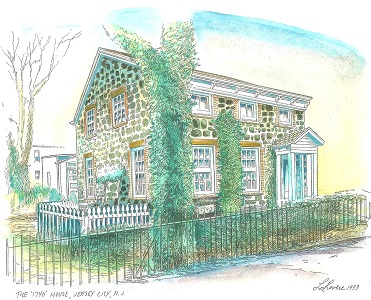 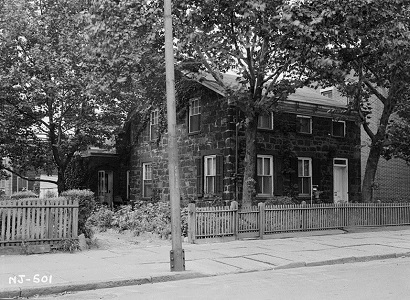 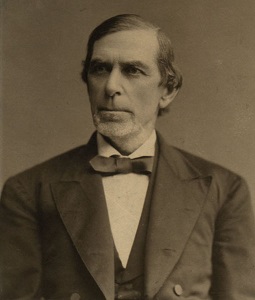 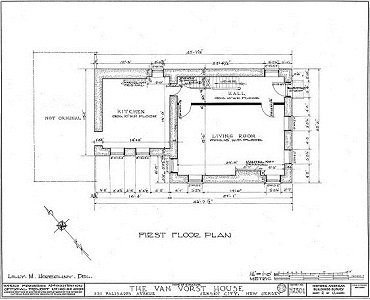 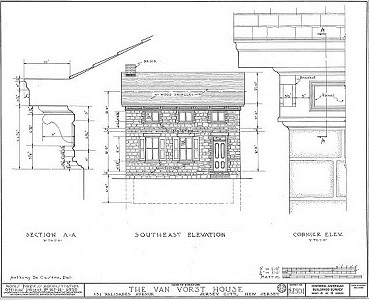 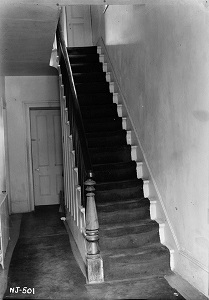 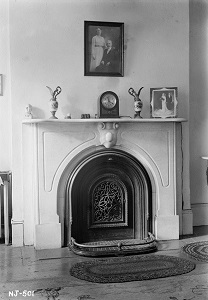 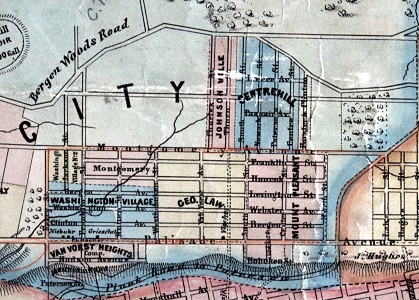 A structure is shown in the same approximate location, however the name "Vischer" is printed nearby, possibly indicating the name of the property owner at that time. 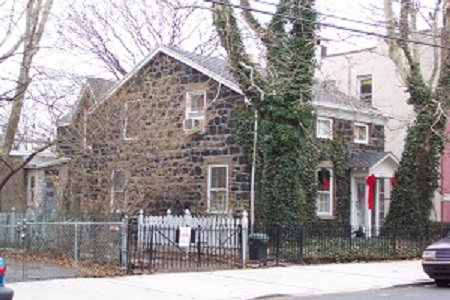 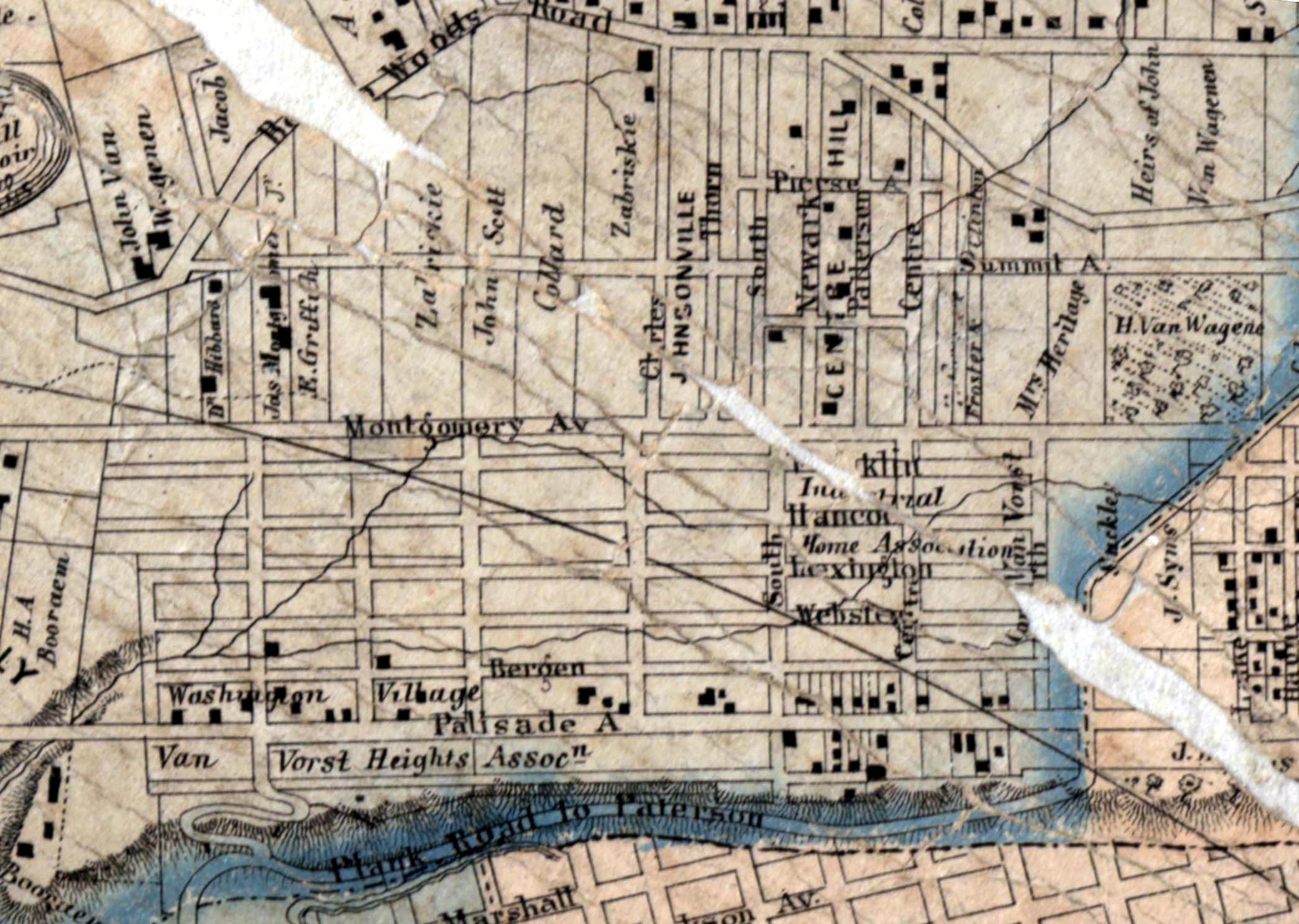 The Van Vorst House is represented by one of the small black squares on the east side of Palisade Avenue between South Street and an unnamed street (today's Bowers Street).

A small house sits serenely along the well-trafficked Palisade Avenue in the eastern part of the Jersey City Heights. Shaded by large trees and covered in ivy, the home's style is plain and unremarkable except for its stone construction. The simplicity of the home's design belies the fact that it is one of Jersey City's architectural treasures - one of a handful of colonial era structures that have survived into the present day.

The Van Vorst family, descendants of Cornelius Van Vorst (d. 1638) who settled in Pavonia as the superintendent for the Dutch proprietor Michael Pauw, flourished in the Township of Bergen. They established several small farms and homesteads on the west bank of the Hudson River. At one time, Jersey City could boast of several different "Van Vorst" homes that once belonged to members of this prosperous farming family. Over the years, these buildings disappeared, leaving only a few archival images as evidence of their former existence.

The Van Vorst farm house is only several hundred feet west of the Palisade cliffs, and its early residents must have once enjoyed panoramic views of the Upper New York Bay, Manhattan Island, and the Hudson River, and views of the small farms scattered among the tidal marshlands below. Mid-nineteenth century maps identify the nearby areas as Washington Village and Van Vorst Heights, sections of the larger and formerly independent municipality of Hudson City. The nearest main thoroughfare was the appropriately-named, winding route known as the Bergen Woods Road (now parts of Summit Avenue, Sanford Place, and Kennedy Boulevard), as that area remained largely forested into the early 19th century.

The building reportedly dates back to 1740-42 or “about the middle of the eighteenth century” according to the Historic American Buildings Survey (HABS). The Library of Congress includes the Survey on its website that features both photographs of the Van Vorst house by R. Merritt Lacy (1933) and architectural renderings.

The HABS images show the two-story bluestone house, as it appeared in the late 1930's, with a wood-shingled pitched roof and inside stone chimneys with exterior brick tops. The façade, on the first level, features a pair of windows with shutters and a front door to the right. A glass overhead transom and a stone lintel above and a sill below frame the doorway. The portico may not be original to the house. Three smaller windows appear on the second floor. The wood trim around the windows and doors is painted white.

On the first floor is a living room with fireplace (the mantel is not original), kitchen and side hallway and a side staircase, leading to three bedrooms on the second floor. Below the first floor is a cellar, and, at the rear of the house, is a single story brick extension of a later date.

There are no records indicating who may have actually resided in the house during its early years. The house was one of several properties once owned by prominent local landholder Cornelius “Faddy” Van Vorst (1728-1818) who operated the profitable Paulus Hook ferry. After Cornelius' death in 1818, the title to the property passed to his son John Van Vorst (1761-1832). It is held that in 1842, following the subdivision of his father's estate, the house and farm were bequeathed to his only son, also named John Van Vorst (1823-1895), an alderman of Jersey City and a member of the NJ General Assembly (1851-1852, 1864-65, and 1868).

The HABS reports that Augusta Waugh purchased the house from John Van Vorst in 1859 and that the house was later owned by the Tuttle family, ca. 1866. This account is in keeping with a study completed by Alice Larkins in the 1970's for the Jersey City Historic Districts Commission (see Anthony Olszewski).

In 1901, the Tuttles sold the house to Emil and Elizabeth Stahl. An inventor who took out patents for beverage related products, such as a counter carbonator (1919) and a beer cooler (1898), Stahl also took an interest in the colonial history of his home. Elizabeth Stahl eventually sold the house to Captain John A. Byrne and his wife Lovina in 1935/1936. The Pflaster family were the next set of owners in 1965, followed by Ian Anderson who bought the house in 1980.

The Van Vorst House remains in private ownership today as it has for more than 270 years.