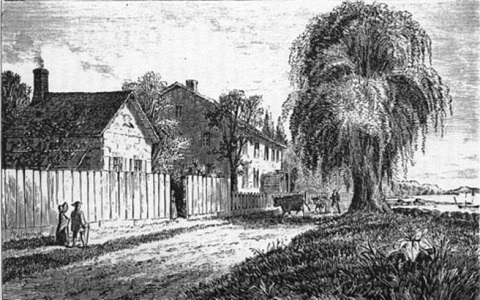 "Faddy" Van Vorst was one of the richest men in Bergen County, owned much of the property at Paulus Hook, and came to prominence during the Revolutionary War era.  According to historian Charles H. Winfield, Van Vorst was "full of fun and practical jokes. He was fond of fast horses, and drove the best team in the county" (433). In 1753, to indulge his infatuation with racing, Van Vorst built a mile-long horse-racing course around the island of Paulus Hook.

Also a serious businessman, Van Vorst began a ferry business along the Hudson River in 1764. The ferry offered commercial transportation via flatboats and passenger service via small boats from Paulus Hook to Cortlandt Street, NY (Robinson 7). An advertisement in the New York Mercury on August 14, 1769, announced the availability of land transportation from the ferry at Paulus Hook to the racetrack.

Patrons attending the racetrack could visit the Elsworth Tavern close to the ferry. The tavern, another idea attributed to Van Vorst, was a one-story Dutch-style building run by Verdine Elsworth "who had built up a reputation for good food and services" (Robinson 7). According to local historian Walter F. Robinson, Van Vorst ensured the profitability of these investments with road development: "Van Vorst had to connect his new ferry with the mainland, by a ferry lane across his island, then an earthen embankment (now lower Newark Avenue) across the marsh to Harsimus Island, then a road (now Railroad Avenue) westward over Harsimus to Prior's Mill bridge and the mainland. This quickly became a busy part of the main post road from New York to Philadelphia" (7).

As the Revolutionary War approached, Van Vorst declared himself a patriot. In 1774, he was appointed to one of the committees of correspondence, representing Bergen County (Robinson 29) and attended a meeting in New Brunswick to elect delegates to the Second Continental Congress. In recognition of his activism, New Jersey's Provincial Congress appointed Van Vorst a lieutenant colonel of the battalion of foot militia in Bergen.

After the capture of Paulus Hook in 1776, the British occupied Van Vorst's house at Harsimus. He and his family were relegated to living in the kitchen. Remaining at the house and failing to fight with the American patriots, however, made him suspect of holding Tory sympathies. Van Vorst was arrested by the New Jersey Committee on Safety, but he was cleared of the charges at a hearing on November 10, 1776 (Robinson 50). Dissatisfied with the British occupation of his home and the loss of his horses and cattle to the British, Van Vorst eventually left with his family to live at Pompton. On returning to Paulus Hook, he lived in his ferry house until the end of the war (Winfield 434).

Like other farmers in the area, Van Vorst held Black slaves for the care of his property. One of his slaves is recorded to be "Half Indian Jack," a spy for the British during the Revolutionary War. He died at the age of 102 years and is buried at the rear of lot No.153 on Wayne Street.

Van Vorst was close to ninety when he died on September 30, 1818. He had four children, including a son Cornelius, born September 6, 1763, of the sixth generation of Van Vorsts.