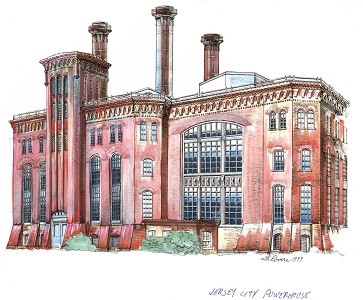 Drawing of the Hudson & Manhattan Railroad Powerhouse
by R. LaRovere 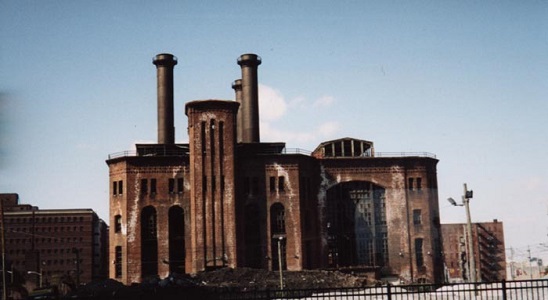 It was designed by the architect John Oakman of Carrere and Hastings, a graduate of the Ecole des Beaux-Arts in Paris. With his partner W. Powell Robins, Oakman received the commission to design the Hudson & Manhattan stations, buildings, and powerhouse from a relative, Walter G. Oakman, president of the Hudson & Manhattan Railroad. The nine-story property has a solid, steel superstructure and 28-inch thick walls. Its brickwork, wide bay windows, and smokestacks with carved cornices represented the purpose of the classic warehouse. James J. Ferris, for whom one of Jersey City's high schools is named, laid the foundation.

One of the project's engineers was L.B. Stillwell. His firm designed the first Niagara Falls power plant. John Van Vleck designed the building's steel frame, Hugh Hazleton of Englewood, NJ, the electrical machinery, and the boilers by Babcock & Wilcox in Bayonne.

On February 25, 1908, the Powerhouse was activated by engineers in response to a telegram sent by President Theodore Roosevelt in the White House to throw the switches and electrify the Hudson Tunnel. According to John Gomez of the Jersey City Landmarks Conservancy, "The coal-powered, steam-generating Hudson & Manhattan Powerhouse energized the railroad's Hudson Tunnels, a subway line that in 1908 physically connected, for the first time, New Jersey and New York. The Hudson & Manhattan Powerhouse provided constant power to the system's lines, cars, stations, and terminals on both sides of the Hudson River, including the wondrous Hudson Terminal in New York City, then the world's largest office and train-terminal complex" (Gomez, "The Hudson & Manhattan RR Powerhouse").

The Powerhouse made possible the subway system between New Jersey and New York as part of the Port Authority Trans-Hudson Corporation (PATH). Before the tunnel that connected the mainland with Manhattan Island, travelers needed to board ferries to cross the Hudson River. The Powerhouse closed in 1929 and became a storage house for railroad equipment. The Hudson & Manhattan Railroad went bankrupt in 1963. The operation of the Hudson Tunnels was taken over by the PATH and its World Trade Center Complex. The Powerhouse is all that remains of the Hudson & Manhattan. It protects a cinder block-encased substation for the PATH train.

In the 1990s, Preservation New Jersey cited the building as one of the state's ten most endangered historic sites. The Jersey City Landmarks Conservancy responded with an aggressive campaign to save the property, and in December 2001, the National Register of Historic Places certified the warehouse as a national landmark. In 2009, the Port Authority and Jersey City, who jointly own the building, agreed to the stabilization of the Powerhouse that continues to power some compressors for the PATH train track switches. The architectural firm Beyer Blinder Belle (BBB) of New York received the commission for the $3.4 million project. And in 2011, the project received $250,000 from the New Jersey Historic Trust for further stabilization. The redeveloper for the project is Cordish Companies of Baltimore, MD.

As work progressed on the century-old warehouse, the 200-foot smokestacks that rise from the building like majestic columns came under scrutiny. In 2012, the Jersey City Development Agency suspected that they were in serious disrepair and might need to be removed. The condition of the roof made its approach to the three extant smokestacks and portions of the fourth dangerous. The engineering firm of Vertical Access was hired to lift inspectors via their 200-foot crane next to the stacks for close inspection. The final determination by BBB was that they were a "... threat to safety and sustainability of the building" (Quoted in Rounds, "Up in Smoke . . .", p. 17). Gomez concurred that their removal was necessary due to structural deficiencies that occurred over years of neglect: "... the stacks were made in pieces with a brick interior surrounded by steel, so you can't dismantle them in one piece" (Rounds, "Up in Smoke . . .", p. 18).

The removal of the smokestacks allowed for the stabilization of the Powerhouse.