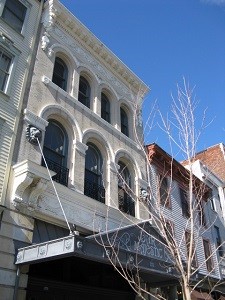 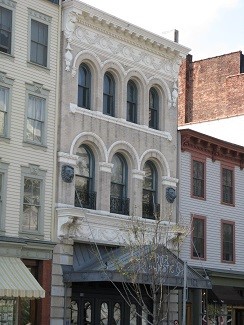 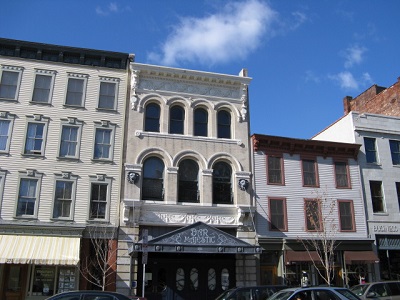 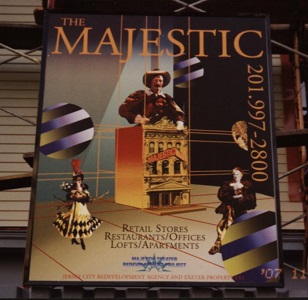 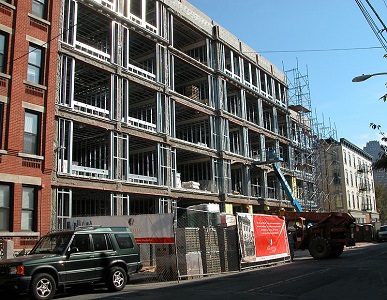 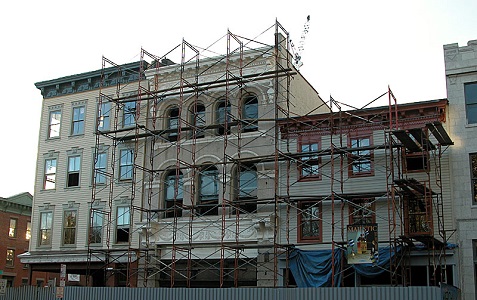 The restoration of the Majestic Theatre by Eric and Paul Silverman of Majestic Urban Renewal, LLC, was recognized with an award from the Jersey City Landmarks Conservancy in 2005.

Designed by architect William H. McElfatrick, known as the "father of the American theater architecture," the Majestic was built by the Klein Amusement Company in 1907 and owned by Frank E. Henderson. The three-story structure, an example of an early twentieth-century theater in the Beaux Art neo-classical style, was part of a complex of five separate buildings.

The theater's exterior was dominated by an electric marquee of the art metal and glass roofing. The box office inside the lobby had oak trim and a wide window. Terrazzo flooring and Italian marble wainscoting decorated the main twenty-five-foot-wide lobby. The interior featured French Renaissance decorative arts: a grand eight-foot-wide staircase, neoclassical painted murals on canvas, domed ceiling with allegorical Greek goddesses, pillars of faux marble, crystal chandeliers, two balconies, twelve opera boxes, and a Wurlitzer piano organ. The auditorium had a seating capacity of 2,300 and a 77-foot proscenium stage. On the proscenium arch, father and son artists, Leo Sielke and Leo Sielke, Jr., of New York City painted The Triumphal Entry. An observation balcony was modeled on that of the Grand Opera House in Paris.

The Majestic was used for light theater until 1917. The first production was a musical comedy entitled "The Mazuma Man." The theater's first feature film was D.W. Griffith's controversial film The Birth of a Nation in 1915, and the first talking film The Jazz Singer in 1927.

On July 14, 1916, the Majestic Theatre hosted the film, The Colored American Winning His Suit to an interracial audience of over 800. The movie related the story of a young African-American attorney. It was produced by the Frederick Douglass Film Company started by Dr. George E. Cannon of Jersey City with the Rev. Dr. W.S. Smith of the Monumental Baptist Church on Lafayette Street, among Cannon's other associates. Named for the prominent African-American freedman, the film company hoped to counteract the negativity towards blacks in The Birth of a Nation and the stereotypical image of Black entertainers in comedic roles. It made only three more films including The Heroic Negro Soldier of the World War in 1919.

After Henderson sold the Majestic in 1925, it became part of the vaudeville and burlesque circuit. Among the performers were Mae West, Al Jolson, W.C. Fields, George Burns, Groucho Marx, Fanny Brice, and George M. Cohan. With the theater located across the street from City Hall, Mayor Frank Hague, who did not approve of the "immoral shows," affected his own censorship of entertainment at the theater. He shut down the production of Laffin Thru and had police arrest Mae West on stage during a performance of her play Sex.

In 1938, the theater was sold to United Artists Eastern Theaters, Inc. and used as a movie house until the 1950s. It then became a factory and a warehouse for popcorn between 1965 and 1973. In 1975, the theater was given to the Assembly of Christian Churches to house the Second Bethesda Christian Church but was foreclosed four years later. The firm of Stinchcromb and Merkelson purchased the property at auction in 1980. It intended to renovate the theater and build a luxury ten-story condominium tower similar to the Carnegie Hall development. However, as the renovation project was debated, the roof of the theater collapsed. The building was demolished in 1995, save the main lobby building, by permission of the New Jersey Historic Preservation Commission.

The renovation of the Majestic Theatre and the four remaining structures of the original complex at 273, 275, 277, and 279 Grove Street was completed in 2004. The lobby of the former theater on Montgomery Street gives access to the six-story, 45-unit Majestic Theatre Condominiums. Retail stores occupy the ground floor. A large "ghost ad" reminiscent of earlier times was painted on the Montgomery Street side of the structure. The Grove Street facade of the former theater building features restored arched windows, plaster ornamentation, gabled marquee, decorative double-door entrance, mosaic tile floors, and original iron gates.

Restoration proceeded under the guidelines of the Van Vorst Park Historic District to revitalize the site as an attractive rental space in the economic redevelopment of the area.